Essex Rental was a struggling and over-leveraged crane equipment rental company. Over the last year the company has liquidated/agreed to sell both of its operating divisions and shareholders approved plan of dissolution on the 5th of June. The proceeds for equity holders are expected to be in the range of $0.17 – $0.35 per share.

With shares trading close to the bottom of the expected distribution range, there is 67% potential upside with only 20% likely downside. Liquidation is expected to start right after the sale of Coast Crane division is finalized (was due by Q2 2017).

ESSX was value investor’s darling back in 2015, when shares traded materially below the estimated liquidation value. Many saw multi-bagger potential, including this highly rated write-up on VIC. However, operations continued to disappoint, rental equipment utilization declined, management did not deliver on their promises and orderly liquidation value estimates (OLV) kept on dropping. Eventually, ESSX deregistered from SEC which caused collapse in the share price. As can be seen from the division sales, asset valuations were sufficient just to cover the debt with only negligible amounts left for equity holders (equity valuation were as high as $2-$5/share back in 2015).

The calculations of the estimated proceeds are outlined on the page 60 of the proxy. 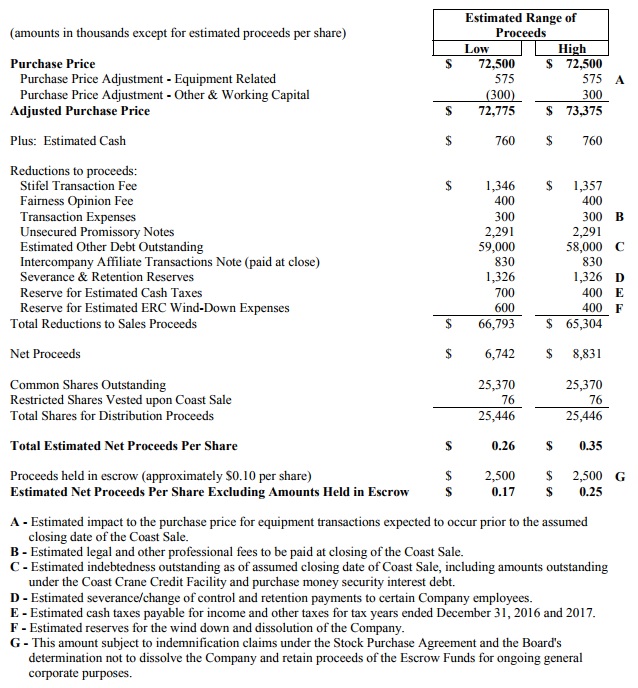 “The amounts set forth in the table below have been calculated assuming the Coast Sale is consummated on June 5, 2017 and as such, the actual amount of distributions to our stockholders, if any, will be adjusted to reflect the actual closing date of the Coast Sale. “

The sale of Coast Crane seems to have been delayed (no information provided as to why), which might mean that working capital adjustment might be different from what is indicated in both of the scenarios above. Also management’s estimates of the transaction and wind-down expenses might appear overly optimistic – management has already dissapointed investors before.

Assuming management’s estimates (at least for ‘Low’ scenario are correct), then upside will depend on the release of the amounts held in Escrow. Out of the $2.5m held in escrow, $0.5m is reserved for WC and other potential purchase price adjustments and the remaining $2m for other indemnification obligation purposes. My understanding is that if the management represented the true and correct state of the company at the time of signing the Purchase Agreement, then this $2m should be eventually released.

Escrow release will be done in three stages:

– Coast Crane sale might not close – it already takes longer than expected. However, when the eventual closing is announced and final purchase price (including WC adjustments) determined, it might serve as a potential catalyst.

– As the Coast Crane sale process is delayed working capital adjustments and other incurred expenses/indebtedness might be larger than estimated in the Low scenario.

– Management’s estimates of dissolution and asset sale related expenses might turn out to be overly optimistic.

– Coast Crane credit facility has been extended till the 14th of August 2017 – if closure takes longer than this, then additional expenses might be incurred to extend the facility again.

This is a bit of a blind bet as payout expectations fully depend on management’s estimates and their track record on that account has so far been quite poor. However, executive officers and directors own 19% of the stock which should be sufficient to align the incentives. On an absolute basis this translates into payouts of $1.3m-$1.6m for low-high scenarios, not a trivial amount. On the other hand, this compares to c. $1m in combined golden parachutes for CEO and CFO. In any case executives are at least incentivized to close the sale of Coast Crane which will trigger initial distributions for shareholders.

No position currently, but might initiate one opportunistically if shares drift closer to $0.17.