UTG is closed-end fund investing in utility sector. The fund issued transferable rights to subscribe to new common shares. For every three rights held, a holder of rights may buy one new common share of the Fund at 5% discount to 5 day average closing prices preceding the expiration date (October 4th). This created an arbitrage play whereby the buyers/holders of rights were shorting UTG common stock to lock in the arbitrage profits (although this was never a sure thing, as arbitrage profits are dependent on the average trading price over the last 5 days). With a number of articles posted on SA the trade likely became quite popular and caused downward pressure on the UTG share price, which declined from $35 to $31 over the last couple of weeks.

The situation is well covered on Seeking Alpha and I direct you to articles by Left Banker (here, here and here) for further details on it. I have a slightly different trade on this – not the arbitrage with the rights, but rather expectation of NAV discount mean reversion.

In Aug 2017 (before rights distribution) discount to NAV was close to zero, and 52 week average discount stands at only 2% (check historical discounts here). 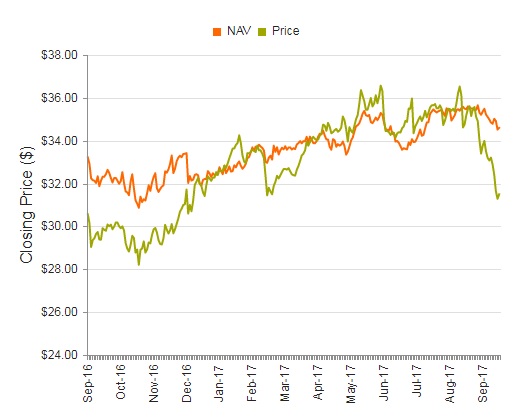 Now the discount is at 9% – a clear outlier as can be seen in the graph. Part of the widening discount can be explained by expected NAV dilution due to new shares being issued at a discount to NAV. However, assuming the extreme scenario where 100% of rights get exercised (2015 offering only 53% were exercised) and where market price discount to NAV prevails at current levels through expiration, NAV declines by only 3.5% (calculated this using 33% increase in the number of shares at 14% discount to NAV). The remaining 5.5% widening of the discount was likely driven by the selling pressure from arbitrageurs.

There do not seem to be any reasons to suggest that this wide discount should persist and I would expect share price to revert close to new NAV (which will be 1%-3.5% lower than the existing NAV due to dilution). Similar rights offerings have already been done in 2012 and 2015. Both saw the exact same mean reversion that I am expecting for the current one (more detailed analysis of previous offerings here).

Thus by buying UTG now and assuming NAV remains unchanged, I stand to gain up to 5%.

Another option would be to buy rights and exercise them to acquire newly issued shares of UTG. However, taking into account the cost of rights, the additional gain using this method is only $0.5/share, but leaves one exposed to uncertainty regarding the exercise price.

– Exposure to NAV – although UTG NAV has remained relatively stable over the last year (in the range of $32-$35/ per share), any wider fluctuations might completely eliminate any gain and even cause losses. On the positive side, UTG invests in dividend yielding utilities, thus wide NAV fluctuations are quite unlikely, especially for short term trade.

– Mean reversion might not happen – I was very wrong about this in my trade on QQQX. However, this time the widening of the discount has been clearly driven by selling pressure resulting from the corporate action – and this pressure will be eliminated once the rights expire.

– Current case might be different than 2012 and 2015 rights issues – current rights offering seems to have gained far more popularity this time (at least judging by SA coverage) than the previous ones. Not yet sure whether this is a positive or a negative, but the situation might end up differently than before.