This idea was offered by Bram.

This potential payment – or CVR – is an all-or-nothing milestone that must be met within five years of the deal closing. In effect, by buying in at $4.52 you are paying $0.07 for a chance to receive either $0 or $2.63 – either a loss of 100% or a gain of 2822% from the date of closing. Up until the date of closing there is effectively only the risk to lose a substantial amount.

What can go wrong?

There are two main risks to this deal:

If the deal falls through entirely this investment can potentially result in a disastrous loss. SteadyMed is a very small cash burning pharmaceutical company. It would likely require some other form of (dilutive) funding to continue as a going concern. The good news is that due to a few quantitative (43% of shareholders support merger) and especially important qualitative factors I view the probability of the deal falling through as extremely low.

For detailed discussion on probability of CVR payout see the last section of the write-up.

United Therapeutics was started by Martine Rothblatt because her daughter was afflicted with pulmonary arterial hypertension (PAH). She relentlessly pursued a pharmaceutical company that killed off an orphan drug potentially effective on PAH to license it to her company (ultimately, United Therapeutics). This then developed into the current dominant therapy to stabilize PAH patients called Remodulin. Remodulin is the name that’s given to a drug called Treprostinil while administered 24/7 through a pumping system. It looks like this:

Her daughter is now still alive and doing quite well thanks to this drug. She is actually working at United Therapeutics to source cures for orphan drugs – pharmaceutical which remain commercially undeveloped. Martine tells this remarkable story on stage here. It seems likely the market is unaware of this backstory.

Not a new drug / but new delivery

Steadymed’s Trevyent is “nothing more” than a potentially superior pumping system to deliver the same drug as Remodulin delivers: Treprostinil. However, there are indications, like Trevyent being granted an orphan drug designation, to believe it could deliver a significantly better and safer patient experience. Advantages could include a less painful experience for patients and lower probabilities of infections. A simple practical benefit is that it could make it much easier on patients to take showers.

A cynic might argue United Therapeutics is buying its competitor up to kill its product before it hits the market and destroys its own cash cow.

However, if you know the backstory of Martine Rothblath, you’d know that she made heaven and earth move to save her daughter. That daughter, who is afflicted with PAH herself, works at United Therapeutics and dedicates herself to sourcing other undiscovered orphan drugs that just seem like a highly unlikely scenario to me.

Steadymed is a tiny prey

To me, it appears the probability of this deal completing successfully should be at the high end of the range for deal closures. In the unlikely event that doesn’t happen, I think it’s fair to prepare for a stunning loss. It could be anywhere between 50% and 100% of the amount invested. If you get out ASAP on a dealbreaker, it’s probably closer to the 50%.

The opportunity is so attractive because the majority of a potential investment is locked up only a short time, likely until the end of the third quarter. That’s about 90 days from now. After that ~90-day period you will receive 98% of your investment back on a close. After five years the remaining 2% is either a write-off or it will have generated a staggering return of 2800%+ for you.

To make this a bad bet, the probability of a payout has to be very low.

These are the conditions that have to be met within five years of deal close for the milestone to payout:

The CVR Consideration will be payable if, within five years of the Effective Time, and following receipt of the first approval by the FDA of a ‘New Drug Application’ (as defined in the CVR Agreement) for the Trevyent® product combining the Company’s PatchPump® delivery device with treprostinil for treatment of pulmonary arterial hypertension (the ‘Product’), a total of 3,000 ‘Initial Treatment Visits’ (as defined in the following paragraph) have occurred in the United States (the ‘Milestone’).

‘Initial Treatment Visits’ are visits by a member of the clinical staff of a specialty pharmacy to a patient to whom the Product has been prescribed, during which the initial treatment of such patient with the Product is administered (but excluding patients receiving the Product as part of a clinical trial or free of charge via an expanded access program, a patient assistance program or any other program). If the Milestone is not achieved on or prior to the fifth anniversary of the Effective Time, no payments will be made in respect of the CVRs

Without condition 1 being met. Condition 2 can’t be met.

Approval by the FDA looks like a formality because the system administers the same drug and it already has the orphan drug designation. If it comes through soon, five years should give the company a very good chance of hitting 3k initial treatment visits. The Trevyent NDA is on track for resubmission to the FDA before end of 2018.

Subsequently management met with the FDA and issued the following statement following what they described as a positive and collaborative Type A meeting:

The FDA is not requiring SteadyMed to conduct any clinical trials to prove the safety or efficacy of Trevyent and has agreed that a repeat of in vitro Design Verification (DV) testing on the final to-be-marketed Trevyent product, supported by pharmacokinetic modelling and Process Validation, should be adequate for the resubmission and acceptance of the 505(b)(2) New Drug Application (NDA).

We are very pleased with the outcome of our meeting with FDA,  we have clarity on the work that needs to be done and are confident that our agreed path forward will lead to a resubmission and acceptance for filing of the Trevyent NDA,

The market is underappreciating the probability it will pay out because:

From what I understand, only very ill patients will undergo Remodulin therapy as it is rather invasive. However, with as much as 15k patients dying every year it seems even the group of very seriously ill patients should be much larger than the number that’s currently on Remodulin.

Growth rate happened fast with Remodulin. When United Therapeutics rolled out the predecessor Remodulin it got picked up fast. In 2002 it got approved at $90k per year per patient. Within one year annual sales jumped to $50 million (~500 patients) and by 2010 sales rose to $300 million or (3000 patients). From a United Therapeutics graph growth leveled off after that which indicates the population was saturated within eight years. 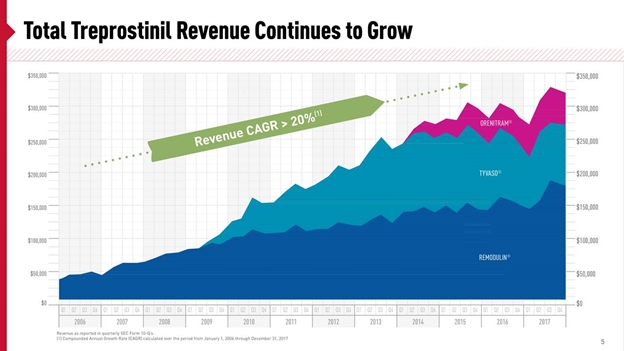 There is a risk the acquiring party could game the CVR in an attempt not to pay. However, it has contractually agreed to make an effort opening it up to litigation. In addition soft indicators described above make it further unlikely.

As the greatest risk I identify the company through honest dealings simply not being able to reach the 3000 initial visit limit. Due to the size of the potential patient population I don’t believe that risk is sufficient to keep me from investing a tiny amount into a potential very large payoff.