This idea was shared by AV.

Walker Innovation Inc. (WLKR) announced last week that the board would call a meeting of stockholders to approve the liquidation of the company. The press release gives us a starting point to figure out how much cash will be available for distribution. As of June 30, 2018 the company had cash of approximately $22.8 million and 39,526,311 fully diluted shares outstanding. Of that amount, between $1.5 and 2.5 million will be held in a contingency reserve for “known and potential liabilities”. Given that Walker Innovation is basically a box of cash it’s hard to see what could drain this contingency reserve, besides severance benefits to employees, and I think eventually a large part could be paid to current shareholders. The company has 4 full-time employees, and at least their management, is entitled to 12 months of salary when their contract is terminated. The CEO and CFO earn a combined $700 thousand a year, so because of that I have gone for the low-end of this range in my calculations, and with a bit of luck even that will end up being conservative. Their office lease will terminate on it’s own in September.

The company is expected to make the initial liquidation distribution in September, so we will have to model one additional quarter of cash burn. In the first quarter of this year $656 thousand went down the drain, so probably a similar amount will disappear between June 30 and September. Besides that, the liquidation itself will probably also not be cheap. I never understood why these things cost so much money, but to model an additional $1 million disappearing in liquidation expenses is not an unreasonable bet. 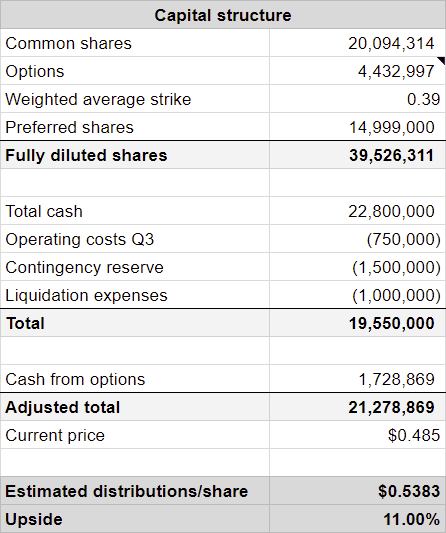 As an added bonus, Chairman owns almost half of the company, which should help to minimize any liquidation expenses and Q3 Opex waste.

Another way to look at this situation is that liquidation costs + Q3 OpEx need to reach $5.3m before liquidation distributions would be lower than the current share price. This is equivalent to 25% of the remaining cash balance and its hard to see how Chairman would allow this kind of waste.