Avenue Therapeutics is $60m biopharma startup focused on developing an intravenous formulation of Tramadol (a known and approved generic opioid pain medication). A phase 3 trial was completed in May 2018, ATXI has already started a second phase 3 trial with results expected in mid-2019.

Following favorable trial results, a large Indian pharmaceutical company InvaGen Pharmaceuticals agreed to acquire ATXI in a two stage merger. The first stage has already closed after shareholder approval in Feb 2019 – InvaGen invested $35m in exchange for a 33.3% stake (equivalent to $6/share, new issuance, pre-announcement share price was around $4). In the second stage of the merger InvaGen would acquired the remaining shares for an aggregate consideration of $180m subject to certain adjustments. Using current share-count this translates into $13.92/share. On top of $180m cash consideration ATXI shareholders would also receive a CVR that entitles the owner to receive a royalties if IV Tramadol sales reach certain milestones, but these would start paying out only after 2028.

Second part of the merger will be consummated only if IV Tramadol gets FDA approval by Dec 2020/April 2021.

As with most biotech startups ATXI financials are horrible. However, $35m financing received from the first stage of the merger might be sufficient till FDA approval – cashburn during 2018 was $20m. Also InvaGen agreed to provide additional interim financing of up to $7m (any amounts drawn would be deducted from final merger consideration).

Management and directors own ~7% of shares outstanding (pre-dilution). Also Fortress Biotech with 3 directors on the board owns another 34% (pre-dilution) . Two directors (Herskowitz, Paley) have been buying since the announcement, at prices up to $5.91, though not in size.

I’m not a medical expert (at all) but the setup looks promising. There is lots of uncertainty – which the market usually dislikes. The stock has been all over the place since the announcement, as low as $4.50 in December and as high as $6.82 in January.

Tramadol is a well-known pain medication and IV Tramadol has, as far as I understand, successfully completed a Phase 3 trial so the chances of getting FDA approval should be higher than zero. Modelling this as a 50/50 flip doesn’t seem completely wrong to me. I don’t know what the base rate is for FDA approval but it seems to me this should be rated slightly higher. Invagen also seems optimistic given their cash injection. Their second stage bid offers massive upside and their involvement also makes it less likely the company will run out of cash.

Has anybody looked at this? Know any of the players involved? How would you handicap the second stage approval? Trying to get a small discussion started here because I’m a bit out of my comfort zone.

If one assumes a close in two years, discounts the cashflow by 15% p.a. and models a zero for failure (all very simplistic), the market is pricing in a ~40% – 65% chance of FDA approval. I.e. roughly a coinflip. Maybe a decent bet to buy at the bottom of that range?

As far as I know Tramadol is a Schedule 4 drug which is considered relatively safe as opposed to morphine, oxycodon etc, which are classified Schedule 2 (high potential for abuse). This is actually one of ATXI’s selling points:

“Tramadol is a synthetic, dual-acting opioid with a unique mechanism of action that delivers opioid efficacy with less potential for abuse and a lower risk of dependence than conventional narcotics.”

Of course the FDA designation could change, I’m no expert on Tramadol but it seems to me they are relatively well-positioned. ATXI seems to market their product as a safer alternative to conventional opioids (then again, of course they would).

More details on Tramadol position relative to other pain relieve and opioid drugs can be found in this presentation.

The image below indicates some base rates for FDA approval. Tramadol is an non-NME (new molecular entity), i.e. Tramadol itself is already FDA approved, just the method of administering is new. The base rate for phase 3 -> approval is ~67% here (74% * 90%). Maybe in this case that rate is even higher now that the first phase 3 trial was successful. Also, Tramadol is already in use in Europe intravenously. All in all FDA approval doesn’t seem like a super long shot, I’d wager chances are > 50%. Which should generate a decent IRR – if all my assumptions are correct and if ATXI / Invagen don’t do something stupid. 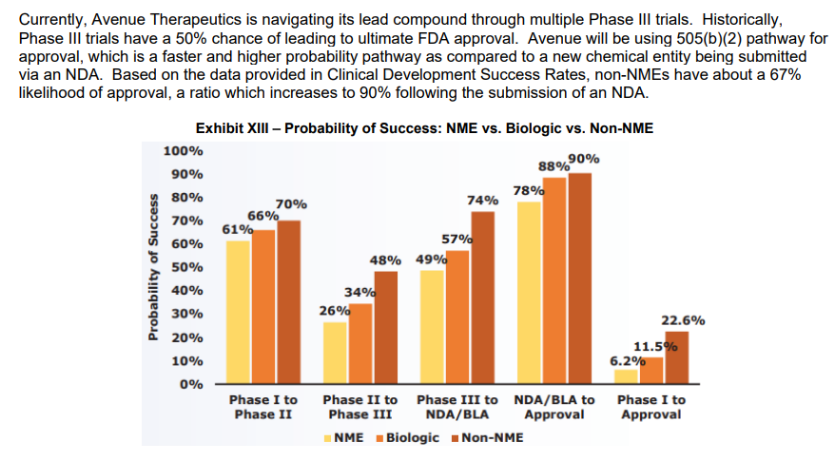