Temple Hotels caught my attention as two shareholders have been actively buying shares over the last few months and currently have a combined 87% ownership. Judging by the speed of share purchases some kind of corporate action (acquisition offer, proxy fight…) seems to be imminent. In other words – something’s cooking.

Despite all time low share price and likely abandonment by traditional REIT investor base (no dividends since Jan’16), I do not consider Temple Hotels to be attractive from valuation perspective. However, I like the setup here and my thesis mainly hinges on the actions by the two shareholders and expected clash between them regarding control and future strategic direction of the company.

Temple Hotels is a failed and over-levered Canadian hotel REIT with 28 hotels and 3717 rooms. The company has fallen from the riches following Alberta’s oil sands bust as almost half of its rooms are located in the region. Shareholders have seen significant dilution – just the two rights offerings over the last quarter have increased the share count threefold.

– Morguard increased it’s stake from 59% to 73% by oversubscribing (here and here) to the latest two rights offerings.

– G2S2 increased stake from 9% to 14% over the last two months through open market purchases as well as oversubscribing to the latest rights offering (full details on SEDI, initial press release). G2S2 continues to purchase shares on a daily basis.

Also worth noting, that there was a stark difference between the two recent rights offers in terms of participation. The first one (Mar’19, doubling of share count at C$1.75) was heavily under-subscribed by outside shareholders allowing Morguard to scoop 84% of newly issued shares. In the second one (May’19, 50% share count increase at C$1.5) Morguard received only slightly more than its prorata allocation as other shareholders participated in the offering much more actively.

Morguard (MRC) is real estate asset manager with C$10.5bn of properties under management. Assets span across residential, retail, office and hotel industries in US and Canada. TPH accounts for majority of Morguard’s hotel portfolio with 10 additional hotels owned by MRC directly. Overall, TPH is less than 5% of AUM.

Morguard has generated fantastic returns for shareholders over the last decade as evidenced by share price as well as BV/share growth. The company was built and is still controlled (60% ownership) by its Chairman/CEO Rai Sahi (see more on his profile and investment/entrepreneurial career here and here). Rai Sahi has a proven track record and required mindset when it comes to creating long term value. He moves aggressively after identifying the target. Morguard’s recent actions on TPH seem to fit the template and the company clearly has sufficient experience in Canada hotel industry to correctly evaluate the opportunity.

However, it is worth noting that Morguard invested in TPH also at significantly higher prices earlier and clearly did not foresee the risk of demand slump due to concentration of properties in Alberta. All share purchases indicated in the table below: 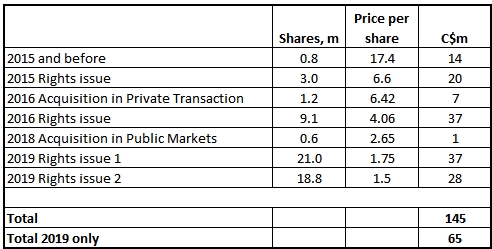 Note: Share count and prices have been adjusted to reflect 2017 6:1 reverse split

With hindsight these earlier investments look like an obvious mistake and does not inspire confidence in Morguard’s ability to value TPH. However, I am not certain how easy it was to foresee oil sands bust and it’s severity at the time albeit this article from Oct 2015 seems pretty clear about it.

Morguard poured additional C$65m into TPH equity over the last two months and it might seem like throwing good money after bad. But I strongly doubt that this is the case, especially with simultaneous investment from G2S2. On top of equity ownership Morguard has also C$35m of debt outstanding with the company. Management fees received from TPH (c. C$2.5m annually) pale in comparison with Morguard’s total investment.

G2S2 is controlled by George Armoyan, who is another well known Canadian activist value investor. His main vehicle is listed investment company Clarke Inc (60% ownership). Here is a chart from annual report outlining value creation over time for Clarke shareholders.

Clarke at the moment only has 3 investments and coincidentally one third of the value lies with 51% ownership in Holloway Lodging – similarly sized Canadian hotel company. George took over control of Holloway back in 2011 after successful proxy fight and has since increased ownership stake. Michael Rapps is CEO of Clarke and also Chairman of Holloway and has worked alongside George since 2012. All of this points to Mr Armoyan being a highly informed investor in Canadian hotel industry.

G2S2 announced 10% ownership in TPH in April 2019 and since then has increased the stake to 14% through daily open market purchases as well as oversubscribing to the rights offering. While motives behind these purchases are not clear yet, TPH hotels (full or partial portfolio) could be merged with Holloway to create higher scale and more efficient player.

Despite two prominent investors with great track records accumulating Temple Hotel shares hand over fist, the company does not appear undervalued whichever way I cut it. This is my biggest probleme on this case – were it not for the purchases by Morguard and G2S2 I would not even consider buying TPH.

The easiest comparison is with similarly sized Holloway Lodgings where TPH appears more expensive on all metrics mainly due to high leverage. 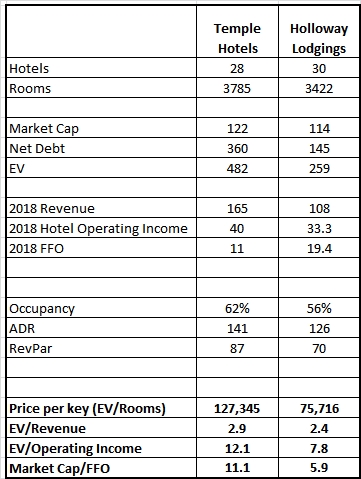 TPH performance is skewed to the negative side by hotels in Fort McMurray (1/4 of total rooms) were occupancy was only 44% during 2018 (vs 62% for the whole portfolio). Q1’19 results paint an even bleaker picture with Fort McMurray continuing to deteriorate.

I struggle to understand why George Armoyan is more eager to buy shares in TPH instead of further increasing the stake in Holloway. Equity optionality due to high leverage might be playing a part here.

Some further reference points on valuation:

– TPH had peak revenues of C$188m and peak NOI of C$58m back in 2014 (Alberta oil boom) with two additional hotels (+10% rooms) in the portfolio. Only using these peak earnings TPH trades at similar multiples as Holloway.

– 2019 Canadian Hotel Investment Report indicates average price per room of C$138k. However, in Alberta where almost half of TPH rooms are located transaction values are much lower at C$83k/room.

– Canadian hotel cap rates range from 7%-8%. At these rates and using C$40m NOI, TPH properties are worth C$500m-C$571m – slightly above or inline with the current valuation (however, at the same multiple Holloway appears very cheap).

– Looking at cost basis, Land and Buildings in TPH portfolio were purchased for C$665m, which is materially above current EV. However, almost whole of Alberta portfolio was acquired either right before financial crisis (2007-2008) or at the peak of oil sands boom (2012-2014), so impairments on these assets are likely warranted. On top of that, capex runs at c. 35% of depreciation indicating potential under-investment in maintenance.

As already noted above, I fail to see undervaluation in TPH at current prices. However, at the same time two investors/insiders with far better understanding and insights on the industry are scooping up shares. So I am guessing I might be missing part of the picture here. I have a small position in TPH and will wait to see if the latest share buying spree translates into some further action by Morguard or G2S2.