The table below shows NAV calculation as of Q1’19 as well as Q3’19. Numbers for the Q1’19 pro-forma NAV are mostly based on figures provided by management in the asset sale press release, whereas Q2-Q3 expenses/income numbers are derived using Q1 financials excluding ShopKo assets (as per Q1 earnings release). All in all, Q2/Q3 expense levels are likely to be similar to the ones of Q1 as one-off costs related to ShopKo bankruptcy during Q1’19 were likely replaced by costs associated with asset sales and liquidation. I also assume company will continue generate revenues from all of its assets till the sale of Master Trust closes at the end of Q3 (if the sale closes earlier then revenue and AFFO will be lower). 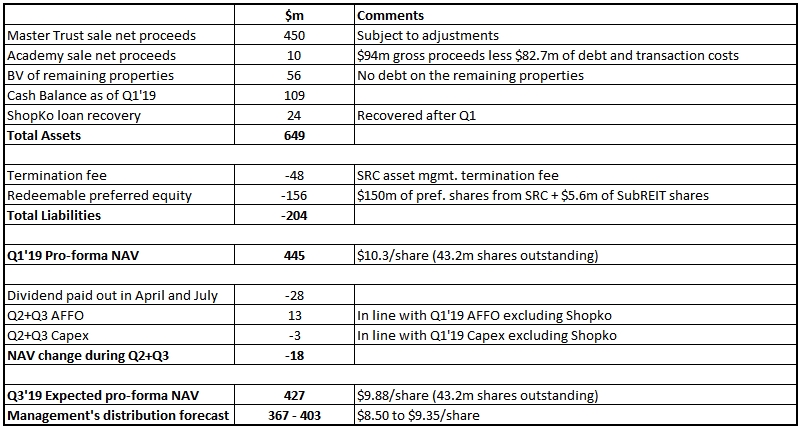 The main take-away of this exercise is material spread of $24m/$60m between my estimated NAV as of Q3’19 and management’s estimates of the eventual distributions. While $24m/$60m margin of safety on itself might not seem large enough for a liquidating REIT with $2.5bn in assets, one has to keep in mind that after the sale of Master Trust and Academy Sports + Outdoors properties (for both of which agreements have already been signed) all of the balance sheet will be made out of cash except for $56m of real estate assets. In other words, if management simply gives away all of the remaining assets for free and liquidates the company at the end of Q3, then investors would break-even at current market price levels. Full list of remaining ‘Workout Assets’ from the proxy:

Management gives two data points on these ‘Workout Assets’ (Academy Sports + Outdoors needs to be excluded from the table above) – annualized contractual rent of $6.5m and annualized property cost leakage of $2.3m. It is not explained what is meant by cost leakage, but I am guessing depreciation is the biggest part of that figure. This would mean that ‘Workout Assets’ generate in excess of $5m cash before corporate overheads and so receiving BV=$56m in a sale of these assets does not seem like a stretch.

After Master Trust sale, ongoing expenses will be drastically reduced – management fee will drop to $0.25m per quarter and other expenses should amount not more that $1m per quarter – G&A stood at $2m in Q3-Q4 of 2018, when company was not burdened by ShopKo bankruptcy and strategic review. Thus even if it takes couple more quarters to sell the ‘Workout Assets’ cash burn from overheads is likely to be immaterial. Also properties remaining on the balance sheet will still be generating income which might partially/fully offset these costs.

All in all, I think it is reasonable to expect that eventual liquidating distributions will be closer to management’s indicated the upper limit (or at least within the range), providing 11% upside to current prices.