Over the last few days there has been a lot of publicity regarding the risk free opportunity to make $850 from Parker Drilling reverse stock split. While the spread is definitely attractive, I think the risk of this transaction getting cancelled or terms amended is very high.

I do not have any position at the moment.

Parker Drilling (PKD), drilling and well service provider for O&G industry, has decided to reduce its amount of shareholders to less than 300 in order deregister from SEC and delist. The company intends to commence a 1 for 100 reverse stock split followed by a forward stock split, which will result in all shareholders holding less than 100 shares getting cashed out at $30/share. The offer still has to be approved by the shareholders, but as the two main holders (own almost 62%) have agreed to vote for the split, approval seems to be guaranteed. The real risks lie elsewhere.

When PKD announced it’s intentions to deregister and delist shares dropped to $16 and only bounced back to current levels after odd-lot accounts started piling due to high cash-out price. For the whole August after Q2 result announcement PKD shares traded within $12-$17 range. Thus, if the reverse split terms are amended or transaction is cancelled altogether, PKD shares will likely trade significantly lower – at least 25% downside.

I struggle to understand why would PKD announce such transaction terms. I doubt management (together with bankers/lawyers working on this transaction) did not foresee the spike in odd-lot accounts. One of the possibilities (and I am just purely speculating) is that $30 odd-lot cash-out was announced already with intention to cancel/amend later. In this way liquidity is created in the market that allows larger shareholders (who have no willingness/abilities to own delisted stock  and who might have objected the transaction) to exit their positions at a premium and at a zero cost to the company.

PKD management claims that the company is undervalued as it only recently came out of the bankruptcy (March’19). The company trades at 2.3x LTM EBITDA and 2.5x Forward EBITDA which is materially below peers on both metrics. 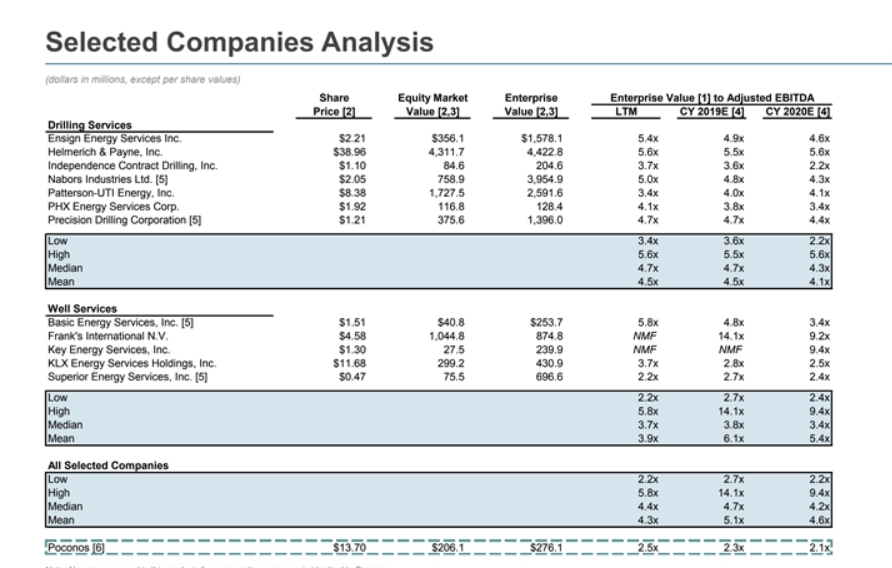 PKD wend bankrupt in Dec ‘18 and came out of it in Mar ‘19 with debt reduced by two thirds (from $585m to $210m).The company has also raised an additional $95m through rights offering (at $15/share) and currently sits on $139m of cash. Coming out the bankruptcy and rights offering company was/is mostly owned by previous note-holders.

The bankruptcy was caused by the aftermath of to 2014 oil price crash that affected the whole O&G industry. PKD was operating unprofitably ever since 2014 and managed to turn profit only in the recent quarter ($0.31/share).

CEO portrays this recent improvement coupled with far more flexible balance sheet as a sign of successful turnaround. Despite continued challenging environment in the U.S., he is optimistic about operations in foreign markets (58% of revenues):

The strategic changes we made were timely, as there remains a considerable amount of uncertainty in the marketplace, particularly with respect to North America fundamentals. In the U.S., many EMP companies are reducing their CapEx budgets, slowing drilling activity, and demonstrating a greater focus on shareholder returns, all while production continues to rise. Service pricing also remains challenging, due both to falling rig activity as well as excess capacity in the marketplace. By contrast, the international markets appear to be strengthening and will likely continue to do so throughout the rest of the year and into 2020. There has been a good deal of positive EMP sentiment overseas, with tendering and drilling activity increasing. This healthier market environment is evidenced by our year-over-year improvement in revenues and growth margin, both in our international rental and drilling segments.