Let me start with a bit of history. Syncora is an OTC-listed holding company that owns Syncora Guarantee, a ‘monoline insurer’, i.e. an insurer of debt, cdo’s, mortgages, etc. Surprise, surprise, the monoline insurer subsidiary basically blew up during the GFC because they insured a ton of US-based residential mortgage backed securities. Ever since, the company has basically been in run-off mode, suing the debt issuers that got them into trouble while restructuring to stay afloat. On top of that they were also involved with insuring Detroit and Puerto Rico debt. Basically a total disaster.

But the past two years some steps forward were made. Syncora settled a big mortgage-backed securities case with Greenpoint Mortgage funding for ~$300m, they entered a reinsurance agreement to get rid of their Puerto Rico exposure, sold excess assets and started a strategic review. This culminated in the announcement, on August 15, that they were selling their insurance subsidiary. The price was considered a disappointment by the market and shares actually dropped ~15% after the announcement. On September 5, the company announced better terms for their subsidiary sale. The purchase price was increased from $392.5m to $429m and the buyer (GoldenTree Asset Management) will also retire all Syncora preferred shares outstanding. A quote from the asset sale press release:

So basically there was another interested party out there and GoldenTree sweetened the deal to stave off a competitor but Syncora had to terminate their go-shop period (whether that was a good deal for Syncora I don’t know!). Anyway, the opportunity:

The thesis is very simple. As can be deduced from the press releases, Syncora has $45m – $60m in other assets, approximately half of which is cash. Other assets are an 80% interest in Swap Financial Group LLC and waterfront land in Detroit (received in Detroit bankruptcy proceedings). Thanks to the GFC the company had $2.6b in NOL’s. Due to some technicalities it was not favourable for the holding to retain all NOL’s when selling their monoline subsidiary but the company still expects to retain ~$300m of NOL’s post-transaction.

A few key quotes from the asset sale press releases:

Syncora expects to distribute substantially all of the cash sale proceeds, net of transaction-related expenses, as soon as practicable after the closing of the sale.

The closing of the transaction remains subject to customary conditions, including approval by the New York State Department of Financial Services, and clearance under the Hart-Scott-Rodino Antitrust Improvements Act, and is expected to take place by the end of the fourth quarter of 2019 or during the first quarter of 2020.

I don’t foresee any regulatory problems with a US asset manager buying a small US debt insurer. Assuming the guidance given by management is more or less correct there should be a large distribution coming in H1 2020. Given the accumulated losses and NOL’s I think taxes are not an issue. That gets me to approximately to the IRR calculated below (to the reader: make your own assumptions and redo it yourself!). Share-count stands at 87m. 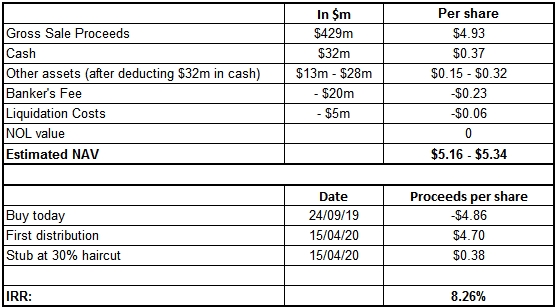 As per the latest conference call management will focus on monetizing the non-cash assets at Pike Pointe, the main asset being the Chene Street Detroit waterfront property which the company is looking to sell / develop with a partner. Earlier this year they sold 2.75 acres for $5m, implying their remaining 8.9 acres are worth ~$16m.

Swap Financial LLC is, according to the company, a stable business and a source of taxable income that benefits from the NOL’s and they are planning to hold on to it. A complete liquidation is not in the cards given the value of the NOL’s.

An 8% IRR might not look spectacular but I am assuming a ~5% bankers fee, whereas according to the FT the average fee for a sell side deal of this side is quite a bit lower. 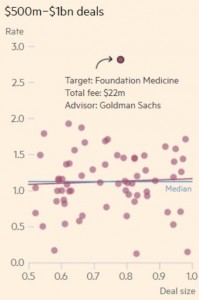 I’m modelling another $5m in liquidation costs and I apply a 30% haircut to the stub that. In other words, I assume the market values the stub at $33m, while it should hold: ~$32m in cash, land worth ~$16m (partially monetized this year), $300m in NOL’s and an 80% interest in a profitable company (though details about the LLC are hard to find). I think the stub is worth more and even in this conservative scenario your IRR would be around 8%.

To conclude, if you buy now I suspect that you will recoup basically your entire investment in a few months and are left with a stub that has a nav of $0.40 – $0.70 and could make another substantial distribution. I think a ~8% IRR is a quite conservative estimate of expected return and I think that the downside is limited. Just the way I like it. I own a decent amount of shares.

As for why this is an opportunity: who likes an illiquid, OTC-listed, GFC relic that has been dragging along for a decade, announced a disappointing asset sale, doesn’t file financials with the SEC and owns a hotchpotch of other assets? I do.

Of course there are always risks – the deal could hypothetically fall through. I’m not really worried about that and even if it happens there were other buyers interested. I think the main risk is that management will squander some of the company assets. However, at current prices you effectively buy a very small position in the stub at prices that I consider attractive, and management indicated they are focused on monetizing assets. And even if management does something stupid you basically run break-even. And, on the flip side, there is some optionality in the NOL’s in case management actually does some good.