Yellow Cake plc (YCA.L), $200m micro-cap listed on LSE (IPO-ed in mid 2018)  that does only one thing – holds physical uranium. It has a twin – Uranium Participation (U.TO) – larger size company that also holds uranium on its books and trades in Canada. Basically, these two companies have very similar fee structure (YCA is slightly better) and therefore should trade at similar discounts/premiums to NAV. Historically that has been the case, however recently the prices diverged and the spread between the two companies widened to 13%. By getting long YCA and shorting U.TO (borrow available on IB), one can benefit from the expected discount convergence.

Why does the Opportunity Exist?

YCA discount to NAV stands at c. 18% and its NAV is fully backed by stockpile of uranium. In comparison, U.TO discount is only at around 5%. As can be seen from the chart, such discount divergence is rather unusual as both companies tend to move closely together reflecting changes in the price of uranium. 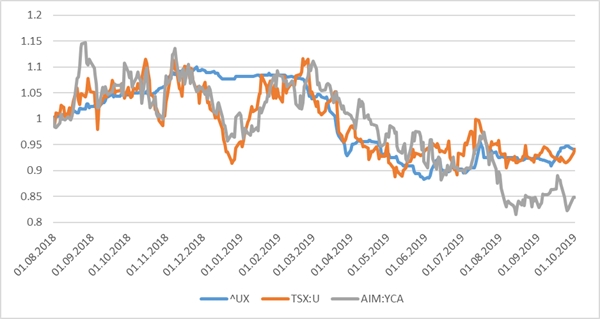 YCA’s discount to NAV widening over the last couple of months might have been prompted by the liquidation of ArrowGrass hedge fund. ArrowGrass is/was an 11 year old hedge fund with substantial portfolio of around $6.4bn at its peak. But as it eventually happens to all hedge funds that lag industry benchmark it faced massive redemptions and at some point just decided to liquidate fully. Obviously, liquidation of the hedge fund this size may not come unnoticed, especially in small and micro-cap stocks.

ArrowGrass was a big shareholder in YCA with 6.8% stake and the whole position was sold in a single day (the 24th of Sep). And although YCA discount started to widen earlier than this, there have been early signs that ArrowGrass liquidation is coming. In April this year Michael Edwards, senior executive of the fund, was due to leave ArrowGrass which triggered so-called key man provision allowing certain large investors to exit the fund. So it is likely that the expectation of the position sale rather than the actual sale caused downward pressure on YCA share price.

Now the overhang is gone and I would expect the discount to start decreasing. Company has also in its arsenal the buyback, YCA has never used it before, but its peer Uranium Participation carried out several buybacks to reduce the discount. It is also in the interest of company/management to pursue this path as such a large discount to NAV prevents YCA from going to the market to raise capital and to increase holdings of uranium assets (and in turn management fees).

Difference in the Way Uranium is Acquired

The main difference between YCA.L and U.TO is the way buying of uranium is organized. YCA has a better arrangement:

More on the contract and YCA structure can be found in its IPO prospectus and admission documents. 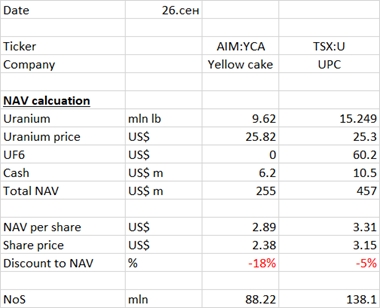 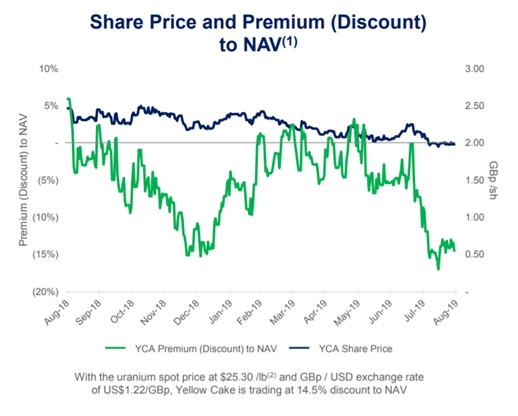 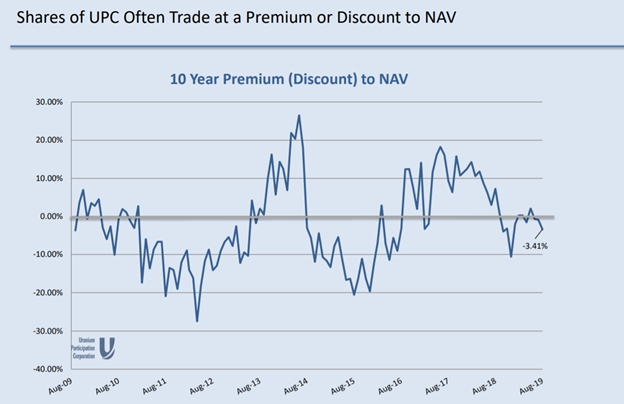 It is very difficult to analyze uranium market as it is not transparent and doesn’t have a good reference price and is affected by geo-politics. There is no physical uranium market and futures are very illiquid.

However, for the hedged position uranium prices should be irrelevant.

Currently uranium prices are close to multi-year lows and at the same time we start seeing supply response from producers – one of the largest suppliers, Cameco, closed its flagship mine and won’t bring it back before price levels on uranium rebound to satisfactory levels ($40-50lb).