This idea was shared by Alex.

This is a merger arbitrage situation in Germany where the target is trading 3% above the current offer price in anticipation of improved bid to gain control of the company and cash-out minority shareholders. Upside depends on materialization of this higher offer or recovery in the buyer’s share price. 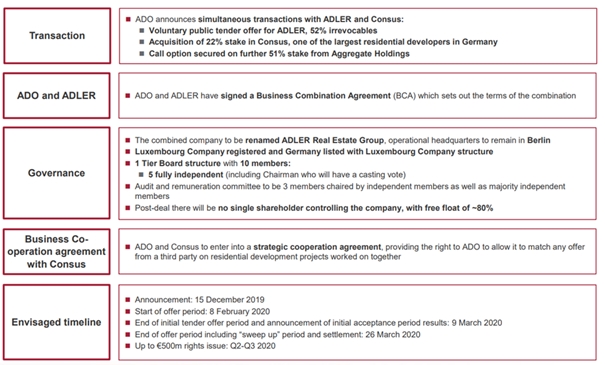 The trade is to buy Adler Real Estate in anticipation of a) a domination and profit and loss transfer agreement (DAPALTA further) b) a recovery in the ADO properties shares price which currently are under pressure.

Although Adler’s investment in ADO did not move any further, it looks like behind the scenes both companies were contemplating a different transaction. On December 15, 2019, ADO Properties offered all shareholders of Adler Real Estate AG to purchase their shares through a voluntary public takeover – 0.4164 ADO shares for each ADL share.

Buying Adler Real Estate now would be paying a ~ 3% premium to the merger consideration with depressed ADO Properties share price (down 40% over the last year vs. improved share prices for German peer group). So the idea is only applicable for those who don’t want to tender their Adler shares now but rather want to play the back-end game by waiting for further full acquisition moves (neither DPLTA nor squeeze out have been announced yet). There is also good reasons to assume that the share price of ADO Properties will rebound (more on this later).

Domination and profit and loss transfer agreements in general

DPLTA is a M&A specialty in Germany and deserves a bit of explanation. In Germany most transactions happen in multiple steps, which is a big difference from the procedures in US. The first step is a formal tender offer, second step is usually a DPLTA with another offer for minority shareholders and the last steps is squeeze out if the bidder has 90%/95% plus of the shares. A transaction doesn’t need to go through all the steps depending on the buyer’s goals.

The domination and P&L transfer agreement is important if the buyer wants to have access to the cashflow of the target. It also means that the buyer consolidates all the P&L of the target. In exchange for that minority shareholders get the chance to cash-out their shares in the new (and potentially improved) offer.

Here is an illustrative example for the process towards DPLTA in a typical case.

The bidder reaches 65%-70% ownership after some of the shareholder participate in the tender. All regulatory approvals have been granted.

The bidder then moves towards the second step and announces intentions to sign DPLTA which must be approved by 75% of shareholders present in the meeting. Simultaneously with the DPLTA, the bidder must offer to cash-out minority shareholders, and this must happen at the greater of (1) fair value, (2) price offered to other shareholders over the last 6 months, i.e. €100/share in this example or (3) weighted average share price over three months preceding DPLTA announcement.

Referencing the price of the initial tender, the bidder would argue that the fair value is €80 and the offer already implies €20 premium to this fair price. The fair value is calculated through the valuators/auditor of the bidder but nonetheless they are called independent.

However, there is also the possibility (like in the STADA case) where the bidder offers to pay more than € 120 because he wants/needs (for example if financing is critical) the additional shares. In the STADA case, Elliot simply said we want you to at least pay X otherwise we won’t approve the DPLTA.

Usually share price moves above the initial offer price in anticipation of DPLTA as shareholders see little downside risk keeping in mind minimum price requirements noted above. If share price stays around €120 during 3 months before the DPLTA then this is the minimum that needs to be offered in this example.

Also if the bidder does not have the required 75% of the votes it is incentivized to offer even better price to entice approval of DPLTA (dissenting shareholder might even offer their pricing requirements for their votes). And finally if the bidder wants to to eventually move towards full ownership and full squeeze out of minority shareholders it might offer an even higher price to get more shares accepted in the tender.

Worth mentioning, that there are also examples (VTG AG, PNE AG, Lotto 24, 1&1 Drillisch etc.) where the bidder did not go for a DPLTA.

After DPLTA gets approved, shareholders that did not sell their shares will continue to own stock of predecessor company with no real exposure to the business (at it is now incorporated into the bidder’s organization) but rather potential for further squeeze-out as well as guaranteed dividend to compensate for lack of participation in predecessor company’s profits (all the profits basically go to the bidder). What happens then is that people always fight this in court and seek “appraisal”. This is called Spruchstellenverfahren. The judge often takes years  sometimes a decade to decide. While the judge is making a decision minority shareholders can tender the shares at any time for 120€ (cash-out price specified in DPLTA) or continue getting the guaranteed dividend and hold the shares. If the judge eventually decides that the original compensation (or the dividend) was too low minority shareholder get the difference plus interest between 5%-Basiszinssatz, which currently stands at -0,88% less the dividend (so in a way guaranteed divided currently around 6%). And finally there is little to lose (aside from opportunity costs) if the judge says the offer specified in DPLTA was fair.

In case 90%/95% ownership is reached the bidder could push for the full squeeze out. For full squeeze out specifics refer to discussion on Linde case. On average the final compensations tend to be at least equal. The main difference is that shareholders will be cashed out and don’t have a choice if they want to keep the stock and receive the dividend.

What happens to ADLER Real Estate next?

ADO should reach c. 60%-70% ownership following the current tender offer and my thesis is that ADO wants to takeover Adler Real Estate via DPLTA (probably during 2020) for the following reasons:

If ADO pushes for DPLTA and makes an offer for the remaining minority shareholders (which is far from certain) the stock should trade at premium of at least 10% to that offer (however, there are no guarantees that the offer will be higher). All in all, I would see the ADLER stock between 10-20% higher from the offer price if a DPLTA is in play. 50% of that would come from the stock trading at a premium and the other 50% from an increased offer driven by a higher VWAP till announcement.

I would expect DPLTA to be announced during 2020, but even if that takes more time in the meantime the currency ADO could become more valuable because of two major catalysts described below.

Why an unhedged trade makes sense

The spread also fluctuates but is currently -3%. When I started writing this the spread was positive was even positive. So one could either wait until the entry point gets more ”interesting” or buy Adler Real Estate unhedged, which a longer time horizon.

The first reaction of ADO Properties share after the announcement was a 12% decline. The high looking purchase price for the Consus stake, the € 500 mm capital increase (fully underwritten by an investment bank) and the sudden strategy shift are reasons for the sharp price drop.

In addition, it is likely that the price was also impacted by arbitrageurs and that the transaction with Adler Real Estate was not very convincingly perceived by some market participants. It is not entirely clear whether ADO does not place empire building before shareholder value so this might have added further pressure on the share price. Especially because ADO Properties could have done a major share repurchase after they sold a big part of their portfolio.

Also ADO Properties trades significantly below BV (EPRA NAV per share ~ €62.47 as of Q3), which is a huge discount from their current share price levels (despite low leverage and valuable assets) and there is a reasonable undervaluation case to be made. The main reason for large discount is the new law freezing rents in Berlin. There are talks that this new law will be blocked, which should right away push ADO share price upwards. Information regarding that can be found on ADO website or at one of their competitors (Deutsche Wohnen).

All in all this transaction is more speculative (in terms of upside) than most other ideas published on SSI, but I think good cases often have an upside which more vague and come from different angles while the downside is limited. Key question is if ADO will go for a full takeover of ADLER and if they do, the chances for upside are significant.