This situation was shared by Preston.

BME (operator of Madrid stock exchange) trades at 2.5% premium to €34/share merger offer from SIX. A number of other exchange operators appear to be interested in BME as well and are likely waiting for regulatory response before proceeding further. In competitive bidding €37/share merger consideration for BME could be easily justified even before accounting for potential synergies and other strategic considerations.

On Nov 18, 2019, the unlisted company SIX Group AG announced a voluntary tender offer for Bolsas y Mercados Españoles SHMSF SA at €34/share. SIX is the primary financial markets infrastructure operator in Switzerland, owned by 125 financial institutions such that no single owner or type of institution has an absolute majority. BME is the primary financial markets infrastructure operator in Spain, including running both the Madrid stock exchange and three regional stock exchanges, with additional market access capabilities in EMEA and the Americas. The combination of these two companies would create the third-largest markets infrastructure group in EMEA by revenues and enterprise value after the LSE and Deutsche Boerse.

Over the period since Nov 18, 2019, BME stock has traded on average at 2%-3% premium to merger consideration, reflecting market expectations of a potentially highly competitive bidding situation involving SIX, Euronext (ENX FP), Deutsche Boerse (DB1 GY), and HKEX (388 HK). Because there is no PUSU (“put up or shut up”) provision governing potential acquisitions made in Spain, these other potential acquirers are in no need to hurry to make any competing bid during the Spanish regulatory review of the outstanding SIX offer. This regulatory review is projected to take 3-5 months from the deal proposal date.

In addition, the parties are also likely waiting to see the results of the pending antitrust reviews of the Refinitiv/LSE transaction, the largest (£22bn) pending transaction in the industry. The Refinitiv/LSE transaction could potentially require divestitures to be made as a condition to deal closing, and if this were to be the case, the parties may be able to evaluate relative advantages of potentially acquiring one of these divested businesses as opposed to or in addition to an acquisition of BME.

Speaking in Madrid on Nov 18, 2019, SIX’s CEO stressed that their proposed offer was “collaborative”, perhaps to distinguish the bid from the recently failed approach by the HKEX towards the LSE, and that their offer contained undertakings to preserve BME’s Spanish character. The offer (€34/share) represents a 33.9% premium to BME SM’s last closing price and a 44.1% premium to BME’s 3-month VWAP, implying a total equity value of EUR 2.843bn. The offer carries a low acceptance threshold, requiring the support of only a simple majority of BME shareholders, and no vote is required on the SIX side. BME is expected to continue to be listed in Spain unless squeeze-out thresholds (equivalent to 90% in Spain) are met.

The SIX offer was announced only minutes after Euronext (ENX FP) was said to be in talks with BME about a possible combination (Sources: here and here).

The following day on Nov 19, 2019, the press reported that Deutsche Boerse (DB1 GY) was also actively considering a bid for BME (Sources: here and here).

The offer will be subject to authorization or non-opposition by the Spanish National Commission on Markets and Competition (CNMC) and the Spanish Securities Exchange Commission (CNMV) and approval from the Spanish Government. 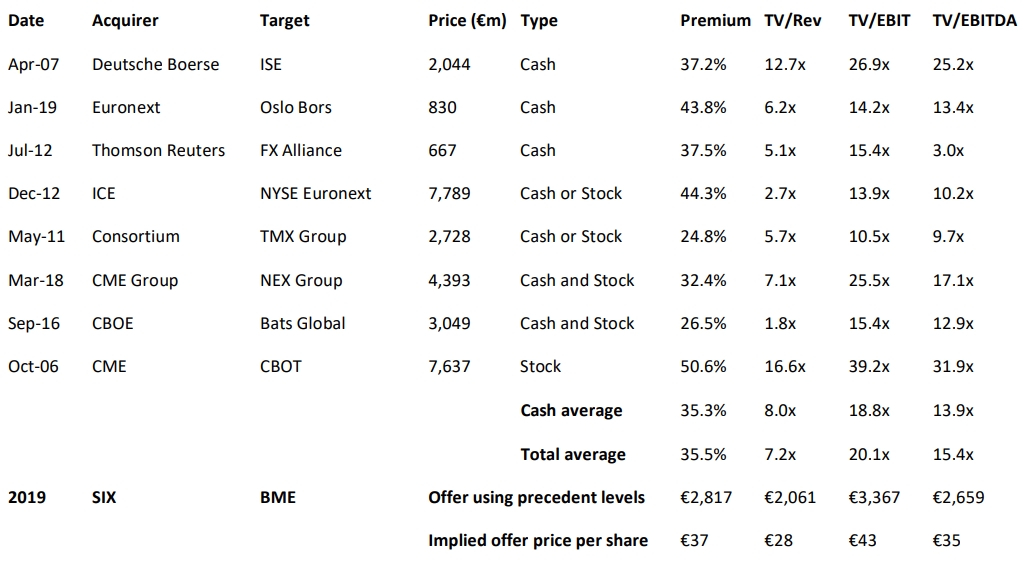 With the new Spanish government formally appointed in January, government business can recommence. The Council of Ministers should adopt its decision on SIX’s bid over the coming weeks. The Minister for the Economy, Nadia Calvino, is not expected to reject the planned takeover. Prime Minister Sanchez and Ms. Calvino are also reportedly aligned to be favourable towards the deal. There is no sign of populist or protectionist rhetoric in the press currently.

There are no concerns from an antitrust perspective, and there does not appear to be pushback from the CNMV to date. Relative to most exchange deals, this deal seems benign from a regulatory perspective.

SIX is a well-funded buyer, and the deal logic is strong despite BME’s operating weaknesses. SIX will diversify its current operating base, and there is a potential avenue to expansion into Latin America corporates. While they have downplayed the impact this deal will have on Swiss/EU Equivalence negotiations, it will not be a negative by any means. BME would be important for SIX as an EU-based subsidiary, given restrictions on trading Swiss shares in the EU bloc and vice-versa. As exchanges continue to grow capabilities and scale, SIX does not have a huge number of opportunities out there from an inorganic perspective. Jos Dijsselhof has talked about the need to invest in technology and grow the services that SIX offers, all under an increasing cost pressure environment; these strategic plans have driven them towards pursuing this acquisition.

There are 2 aspects to Euronext’s intentions. Firstly, does BME bring strategic benefits? Euronext is not in the same position as SIX, and so their consideration is a little different than the Swiss exchange. Second, what price can Euronext justify, and how would it fund it?

Euronext was created with the merger of national exchange businesses across continental Europe. Having merged with the NYSE in 2007, Euronext was spun out after ICE acquired NYSE in 2014. Euronext has seen how scale drives exchange deals, as well as the benefits and costs. Jos Dijsselhof became COO of Euronext after it was spun out of NYSE. After leaving this position, Jos went on to become the CEO of SIX, and Euronext has since gone on to do acquisitions including the Irish Stock Exchange, more recently Nord Pool, and most recently Oslo Bors after a bidding war with NASDAQ. Each of these deals were very different. At the time of the Oslo Bors deal, Euronext declared itself a “family of local exchanges in Europe with the technology, the financial means and the resources to power the capital markets”. Oslo Bors brought a number of benefits that do not really apply to BME: sector expertise that Euronext did not already have like the Fish Pool located in Bergen and strong franchises in the oil, seafood, and shipping sectors; Oslo Bors’ VPS position in national CSD markets; in addition to regional expansion in the Nordics. BME would not be the same type of deal, so one ought to view this deal as more in line with the Irish Stock Exchange transaction.

In Oct 2019, Euronext CEO Stephane Boujnah outlined their current position on International M&A. At the same time, Euronext CFO Giorgio Modica discussed the opportunity for a “transformational deal” that would result in the “expansion of the federal model as well as a diversification of the revenue base.” Modica highlighted Euronext’s focus to remain in Europe regarding future deals for exchanges. Boujnah discussed Euronext’s willingness to raise €500 to €700 million in debt as well as go to shareholders for a potential transformational deal. Euronext views Brexit as an opportunity to become the venue of choice for international listings in Europe. Broader access to Latin America is likely to appeal to them. Euronext highlighted that their mission remains to “connect local economies to global capital markets”. While BME does not bring any vertical franchises that Euronext does not already have, it does bring additional local market access, further scale in Europe, and critically access to Latin American corporates. As a result, on the margin, it seems to tick the ‘strategic benefits’ box.

Euronext targets an ROIC from M&A in excess of its WACC within 5 years. With European rates here, this augurs a 15.6x TEV/EBITDA multiple is possible for BME. Current ENX WACC keeping their leverage constant is 6.4%. Turning this into a 15.6x 2021 multiple, we have €34.50, where the stock is currently trading. If we add to the WACC 1x turn of leverage at BBB EUR rates, we have a target price above €37. All of these considerations exclude any potential synergies.

DB1 has around EUR 2bn of debt capacity at its current AA S&P credit rating, which is already 2x notches above the current rating of SIX and 5x notches about the current rating of ENX. DB1’s net debt to TTM aEBITDA stands at 0.81x, which in tandem with its EUR 28.5bn market capitalization, places it by far in the best financial position to potentially make an offer for BME of the European exchange groups. Although some financial sector analysts on the sell-side have cast doubt in the press on DB1’s ambitions, one must observe that potential acquisitions on the scale of BME are rare. Larger scale acquisitions raise antitrust concerns, for example when DB1’s proposed acquisition of the LSE was blocked by antitrust regulators, and smaller scale acquisitions would fail to significantly move the needle.

DB1’s most recent investor presentation outlines its M&A strategy and acknowledges the scarcity of assets available in the market at the appropriate scale. DB1 and BME have worked together historically and jointly operate the REGIS-TR joint venture in Luxembourg, the second largest trade repository in Europe for financial institutions to clear trades involving derivative contracts and active position margining while also meeting regulatory reporting requirements. BME’s settlements and clearing businesses are combined its second largest revenue segment after equities trading, and DB1’s stated acquisition strategy highlights this segment as its second focus area after selling market data and indices. On the flip side, DB1’s stated acquisition strategy is to focus especially on non-equities expansion, and most of BME’s business remains equities linked. BME’s revenue growth in Latin American corporates would be a mitigating factor and similarly represent growth prospects for DB1.

HKEX is actively seeking to create offshore hubs to facilitate capital flows both into and outside of China, with HKEX’s bond and stock connections to the mainland serving as a gateway. In tandem, HKEX is seeking to capitalize on and facilitate the internationalization of the RMB. To that end, HKEX acquired the London Metal Exchange for GBP 1.4bn in 2012, and late last year emerged as a highly unexpected bidder for the LSE. HKEX is currently relatively underleveraged and carries about $28bn cash on its balance sheet. On the other hand, HKEX is encountering unprecedented upheaval in Hong Kong, and the Hong Kong government can appoint seven out of thirteen of the HKEX’s board members. Perceptions about the independence of HKEX’s board may considerably hamper overseas expansion.

Note that while BME is doing what it can to improve efficiency, BME’s cost base is largely fixed. As a result, the revenue line is the key driver for improvements in its operating margin. BME has been trying to diversify its own revenue base away from its equity trading businesses. By growing clearing, market data, and consulting operations over the last 5 years, they have managed to reduce equity volume-linked revenues to just over 60% of total group sales (which is still high, however). In their strategic plan for 2019-2021, they are targeting a 2% CAGR in the cash equity business. While the rate of quarterly declines has slowed over the course of the year, with the cash equity business still seeing revenue declines, growth prospects overall must be dampened.

Given that not much time has passed since the original deal announcement from SIX, a break price is not too challenging to estimate; a €26 break implies a 2019 EV/EBITDA multiple of 10.7x, which is a ~4 turns discount to the current ENX multiple of 14.8x. If there were no prospects of a counterbid at all, BME would trade ~€33.50. With the stock currently €34.50, it looks like €1 of downside to announcements from DB1 and Euronext. With an estimated upside of €37/share, this situation appears to offer an upside-to-downside ratio of 2.5-to-1 in the base case and of about 1-to-3 in the case using the less likely event of a SIX deal break as downside.