This idea was shared by Colin.

The company is listed on LSE with its shares quoted in British pounds, however, the financial reporting is done in Euros. To avoid confusion all the numbers below are in Euros. Current share price is equivalent to €0.71.

Crystalox Solar is net-net with €1.32/share in cash (as of June’19), minor operating/tax liabilities and freshly reorganized cutting services operations that management is looking to sell. 80% of previous cash balance was recently distributed to shareholders, so the chances are high that full liquidation is in the cards.

On top of that there might be further upside from the expected recoveries from an insolvent customer (might take two years – more details below), sale of the operating business, value of the LSE listing and fully depreciated PPE.

On a positive note, management stated numerous times that they want to maximize the value of their public listing and, moreover, noted that they might buy the business themselves. Existing cash balance should be sufficient till about the end of ’20 before this trade breaks-even.

Crystalox Solar used to be a silicon wafer manufacturer for the photovoltaics industry (solar panels). It had several facilities in UK and Germany, however due to poor market conditions and increasing pricing pressures from China, the company carried out a major business reorganization – shut down operations in UK in 2017 and transformed the business in Germany by completely exiting PV manufacturing (2018), closing one of the two remaining production facilities and consolidating operation into the remaining one (H2’2019). After exiting the UK operations and PV manufacturing in Germany, management hoped that a buyer would emerge for the remaining assets, however due to the unfavourable market conditions that did not happen.

So far the company has still retained its silicone wafering capabilities and periodically provides this service to a customer in Germany (limited contract). Moreover, PVCS is also continuing its funded PV related research, which brings c. €0.4m of annual grants (€0.5m in ’18).

Currently management is trying to switch to a slightly different business of cutting services (silicone, glass, quartz etc.) for optical, medical and semiconductor industries in Germany. The cutting trials on several materials were successful and apparently some business relationships have already been established, however management notes that the efforts are burdened by poor market conditions in the semiconductor industry.

During H1’19 PVCS operations consumed €1.3m of cash, however the number was likely elevated due to ongoing business restructuring. Normalized cash burn (excluding one off expenses) is probably much lower. Moreover, further costs savings should be expected due to consolidation of operations into a single facility (from 2020 onwards). Keeping this in mind, the annual cash burn of 2 x H1’19 levels should be conservative enough. I am assuming €2m annual cash burn for the base case.

In 2018 annual report management was straightforwardly stating that they are looking to maximize the value of their public listing and are open to selling the business in Germany if the offer was provided or that they might even buy-out the remaining operations themselves:

In parallel we will aim to complete the transformation of the manufacturing operation in Germany. A sale to a third party or a transfer of the business to the existing management team would be given consideration if an offer was made.

Following the cash return, the Board will consider the options available to maximise any value from the listing of Group’s shares on the Official List.

However, the tone in H1’19 report got more vague. Although the sale of operations was still mentioned as one of the options, management also discussed the possibility of delisting by noting that it would not even require any approval from the shareholders, which is concerning (even stranger is putting value maximization from the public listing and possibility of delisting in the same sentence):

As part of the continuing resolution of the Group’s affairs, the Board is looking to reduce overheads further and is considering various options including streamlining the management team, restructuring the Board and reducing directors’ salaries. The Board will continue to explore the options available to maximise any value from the listing of Group’s shares on the Official List, while a further limited cash return and possible cancellation of the listing remain under consideration as alternative courses of action. It should be noted that as the Group is a Standard listed company no shareholder approval is required for delisting.

The data on major shareholders is outdated (annual report ’18): 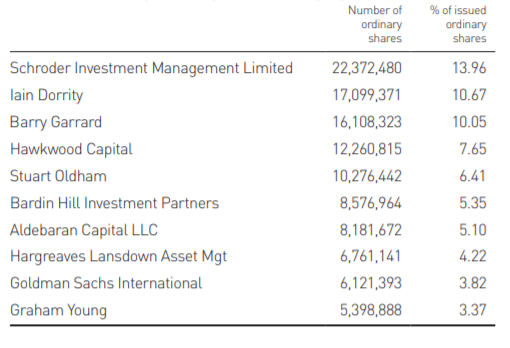