This situation was shared by Raphael

This is a potentially interesting merger arbitrage / improved offer case in France.

Consulting giant Capgemini (CAP) launched friendly takeover of Altran (ALT) at €14.50/share. 43% of Altran shareholders have participated in the tender offer and as a result of that Capgemini now owns 54% stake in the company. Nevertheless, opposing shareholders have filed in court arguing that the agreed takeover price is unfair and was driven by a conflicted process and numerous corporate governance failings. Now CAP is unable to take full control of Altran until the court’s decision on the validity of the initial tender (expected in March’20).

In case the court invalidates the offer, CAP will have to return the tendered shares and make a new offer correcting all of the irregularities in the previous offer and potentially increasing the price right away or after 7 months to satisfy minority shareholders and reach a squeeze out threshold (90% needed). If the court judges in favor of the offer, CAP will reopen the current offer (€14.50/share).

Given that the downside to the current offer is <1%, while the potential upside is 5%+ (to lowest price range level of the independent valuation done by the expert assigned by minority shareholders) this situation looks quite attractive.

In June’19 consultation, Capgemini has announced that it will acquire Altran for €14 eur/share. Moreover, simultaneously to the offer the buyer acquired 11% ALT stake (at the same price) from its largest shareholder APAX/Altamir (ref. APAX), which completely exited the investment.

In July several shareholders including activist fund Elliott Management (which then secured a substantial position through equity swaps) opposed the merger and asked ADAM (French association for minority shareholders protection) to defend their interest. Subsequently ADAM wrote several letters to AMF (French financial authority) to block the transaction due to certain “irregularities” (more details below) in the takeover process. However, the transaction received all the needed regulatory approvals, including AMF. Then in October’19 ADAM has filed an appeal on the AMF decision and asked court to freeze merger until the final decision is made. In December the court has ruled against the suspension request, however the final decision regarding the validity of the offer is expected on the 24th of March’20.

Eventually Elliot has acquired a 14% stake in ALT and in November/January wrote letters to ALT shareholders stating that the proposed price is inadequate. Moreover, ADAM hired their own independent expert who concluded (DCF valuation) that Altran is worth between €15.30-€19.00/share excluding synergies.

On the 14th of Jan’20 CAP slightly raised their offer to €14.5/share and noted that if it manages to acquire enough shares in the tender to own a majority stake (50.1%), the buyer will not make any more offers with a higher price for another 18 months. Elliott stated that it will not participate in the tender and may continue to build a stake in ALT.

Tender offer successfully closed on the 22nd of Jan’20 with CAP currently holding ~54% of ALT (the majority of shareholders did not support the merger – 46% did not tender vs 43% tendered). On the 28th of January, the offer was reopened for additional tendering until the 10th of Feb (at the same price).

Nonetheless, until the court makes the decision, CAP has made several commitments:

Taking all of the points above it seems that the possible scenarios are:

Court decides that offer was valid

Capgemini then takes full control of ALT and reopens its current offer. Minority shareholders will either tender their shares for €14.5/share or wait another 18 months for a possible new offer. Nonetheless, Elliott holds 14%, so it can single-handedly delay the squeeze out (90% threshold required).

According to French M&A regulations, if CAP decides to make a new tender at a higher price before 1 year passes since the launch of the previous tender (16th Oct’20), it would also have to pay up the difference to the shareholders who have tendered in the previous offer. So in this case, I would not expect any moves from CAP until Oct’20, although it is also fair to assume that they would present a new offer sooner than after 18 months.

Court decides that the offer was not valid

In case of unfavorable decision from the court, there is also a significant chance that CAP would straightaway increase the price of the subsequent offer in order to gain larger ownership stake rather than 54% achieved following the current offer. CAP has already went back on their own word once and raised the price despite telling it won’t – in Nov’19 when the consideration was still €14.00/share CAP CEO has stated that it would rather pursue other opportunities than increase the price. So ’18 months’ might have been just scare tactics to entice shareholder to participate in the current offer rather than strict strategy going forward. CAP might choose not to wait and instead increase the buyout price to satisfy the minority shareholders aiming for the squeeze out.

The risk of CAP dropping the merger altogether even if the court invalidates the offer due to formalities is low. They’ve already invested a considerable amount in their 11% stake (possibly more as not all of the shareholders might request back the tendered shares), so complete withdrawal would be difficult.

ADAM and minority shareholders argue that the suboptimal price was driven by a conflicted process and numerous corporate governance failings (original documents in French / Elliott presentation):

Although the recent sale of Apax’s remaining stake has triggered payments to the executives, no details are available as to their quantum. […] Cerutti’s incentive to trigger the payment might have been relevant vs. his total annual compensation of approximately EUR 2 million […] and his share ownership of slightly over EUR 1 million […] Such compensation arrangements raise several questions, like whether the payments create leverage for a single shareholder (because there are discretionary elements or simply because of deference to the shareholder that is providing the incentive), […] and whether the structure of the incentive will create misaligned incentives.

So ADAM states that Altran did not comply with the regulations and allowed at least 3 directors (CEO and two APAX representatives) who had conflicts of interests to vote in the first two meetings. Therefore those approvals should be nullified.

ADAM argues that the fund had no choice but to agree to a weaker price (translated):

Thirteen years after closing of the fund, there is no doubt that the Apax France VII fund was in a hurry to find a buyer under pain of having no other solution than to distribute Altran shares to fund investors (provided they agree to this solution) or proceed with a placement on the market, as in 2017, without any premium, and therefore with a capital gain (and therefore remuneration) reduced or non-existent.

In any case, it is clear that the agreement with “the shareholders around Apax”, testifies to their will to go quickly and not to be subjected to any randomness : thus they did not conclude a pledge of contribution as is often the case in such a situation, but have they agreed to a immediate “cash” sale thus excluding the risk of a failure of the offer or absence of an offer

Moreover, the initial tender price also did not provide for any control premium, however now that the offer was raised this argument does not apply anymore. However, it is not clear if the additional €0.5/share should be considered as sufficient for the control premium.

Thus, Altran did not comply with the regulatory requirements, was late to provide an Offer Documents, failed to disclose certain information therefore shareholders had limited time to see into the offer and make a proper decision.

Rationale behind the offer

The merger with Altran will be one of the largest ever for CAP. With this acquisition the company aims to become a leading edge software engineering company and increase its capabilities of providing digital transformation services (investor presentation). Both companies provide services to industrial companies, so there will be significant cross selling opportunities. The whole idea was summed up well by International Data Corporation:

What makes the tie-up so well-suited from an opportunity standpoint is that while Capgemini and Altran target similar enterprise customers (large, global brands) they capture spend from different parts of the business. Capgemini sells into the CIO, IT director, and other C-suite execs, while Altran sells into the line-of-business managers, such as the head of manufacturing, R&D, and supply chain. This means that the two businesses are truly talking to different sides of the same house, and together will capture a much larger share of wallet within the client organization.Moreover, the transaction is highly synergistic: 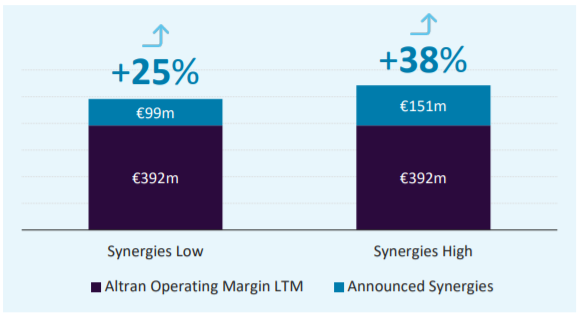 So overall the transaction seems highly beneficial to CAP and it would be difficult to see them withdrawing given that they’ve already invested heavily into 11% stake (~€400m) and already bent the knee once to sweeten the offer. For now it is difficult to say much about the pricing as the companies don’t provide much information in their quarterly reports, however we should be able to see a clearer picture by the end of this month when the annual reports are out.