The graph below details the individual MoM performance of all the active/closed cases (excluding Quick Ideas) during February. 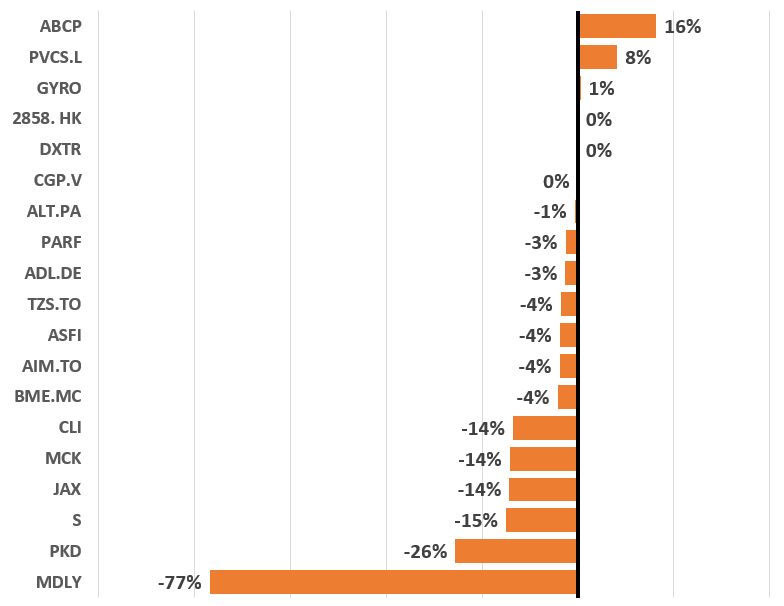 Syncora Holdings (SYCRF) 7% in 5 months
Syncora Holdings was selling its monoline insurance business and intended to distribute proceeds to shareholders. The stock was trading around the value of the expected distributions from the sale, giving no credit for the remaining stub, which with conservative assumptions suggested additional 8% upside. Management later indicated that it is looking to sell the remaining non-core assets and fully liquidate the company. Following sale of monoline business and cash distribution the initial spread has narrowed materially resulting in 7% gain in 5 months. The stub now trades at c. 20% discount to the conservative estimates of the remaining distributions, however management believe that it might take a year to fully liquidate the company. Management did not provide any estimates of the remaining distributions.

Sprint (S) -15% in 1.5 weeks
This was a speculation on potential price renegotiation for an all stock T-mobile/Sprint merger. After judge unexpectedly approved the transaction Sprint’s stock jumped up by 80%, yet it still traded with 14% spread to merger consideration. Large spread mainly reflected expectations of possible price renegotiation between the companies. Over the last 1.5 years since merger announcement, financial performance of both companies diverged significantly – TMUS performed decently, while Sprint showed lackluster results with its stock trading below pre-announcenement levels. Due to increase in TMUS share price during the period, existing merger terms implied 45% premium over the initially agreed price for Sprint (in $ terms). So not only it seemed likely that merger terms will be amended, but it also looked like the market underestimated the size of the potential cut. Besides that, TMUS CEO himself has hinted about possible renegotiation a few times, while rumours on the amendment were spreading in the media. Softbank, 84% owner of Sprint, appeared to be in a weak position for any negotiations.

In the end, the merger terms were amended indeed, but only to Softbank. Merger consideration and exchange ratio for the remaining Sprint shareholders were left unaffected. The spread closed after this announcement resulting in 15% loss for the trade.