On September 13th, 2019 Tencent made a non-binding “take-private” offer for Bitauto at US$16 per share/ADS. This deal looks to have a high probability of closing given Tencent already owns 7.8% of Bitauto and has secured votes from the largest shareholders adding a further 48.5% (JD.com, Li Bin, Cox). As Bitauto is incorporated in the Cayman Island, 2/3 of shareholder votes are required for the proposal to be accepted. Therefore, the proposal only requires another ~10% of the votes to go through.

Currently, this deal offers a ~6% spread, which looks quite attractive in its own right. However, I am more interested in the contingent deal mentioned in the notes of the Bitauto take-private proposal. If Tencent succeeds in the transaction, it will result in a change of control in Hong Kong listed Yixin group, wherein Bitauto holds a 44% ownership stake, triggering an “unconditional mandatory general offer to all shareholders of Yixin.” I find this second, conditional offer, more interesting because it is more complex, has higher potential upside and seems to have less “priced into” it. Therefore, it has the characteristics of my favourite bet: low downside and potentially very attractive upside.

Finally, the situation seems to exist due to small size, limited liquidity and it not appearing on any “deal lists” yet, as it is contingent upon the Bitauto deal closing. Therefore, the professional arbitrage community may not be very active in the situation, creating a vacuum of potential buyers and resulting in an unfair coin flip. This theory is supported by the Bitauto spread remaining relatively stable since the announcement, while Yixin’s share price has drifted down substantially (despite their probabilities being exactly the same – i.e. if Tencent acquires Bitauto, they must make an offer for Yixin). 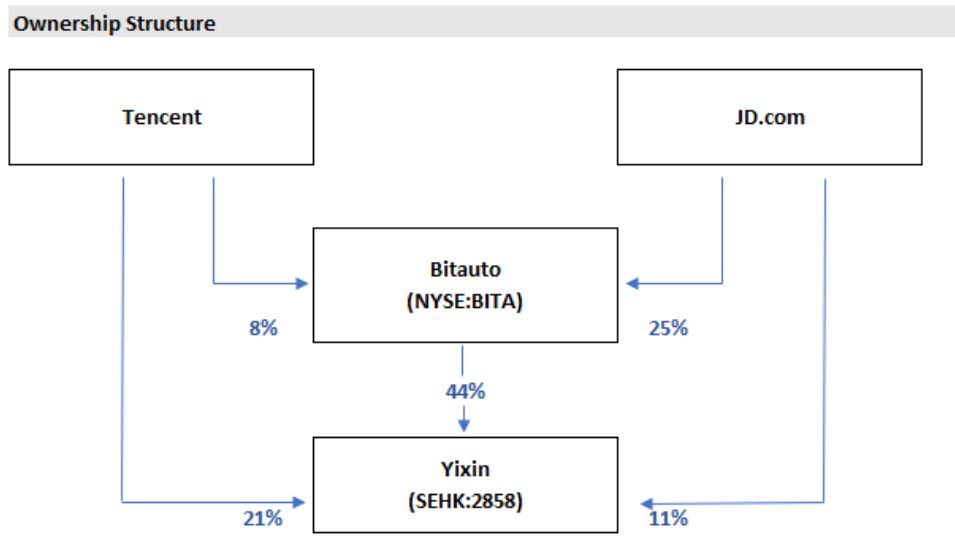 If I were in JD.com’s shoes, I would not want to be stuck with a minority position in a company effectively controlled by Tencent. Therefore, when I (JD.com) agreed to become a “supporting shareholder” and sell my shares in Bitauto, I would have wanted a guarantee that, if the deal goes through and Tencent then has to make an offer to buy out the remaining shareholders in Yixin, we are compensated via a juicy premium.

Translating it from lawyer speak, I believe it says “JD.com will not sell its holding in Yixin for less than HK2.00 per share.” There is a chance this means that they are happy remaining a minority investor, while handing control to Tencent. But as explained, I believe this would not be a smart move strategically and I cannot see why JD.com would have agreed to a transaction structured this way.

Normally, when a company triggers a change in control, it occurs through them buying shares and breaching some key ownership threshold (i.e. 30%). This makes calculating the “minimum offer price” rather simple, as in the case of a Hong Kong listed entity, it is simply “the highest price paid by the Offeror, during the offer period and within 6 months prior to its commencement.” 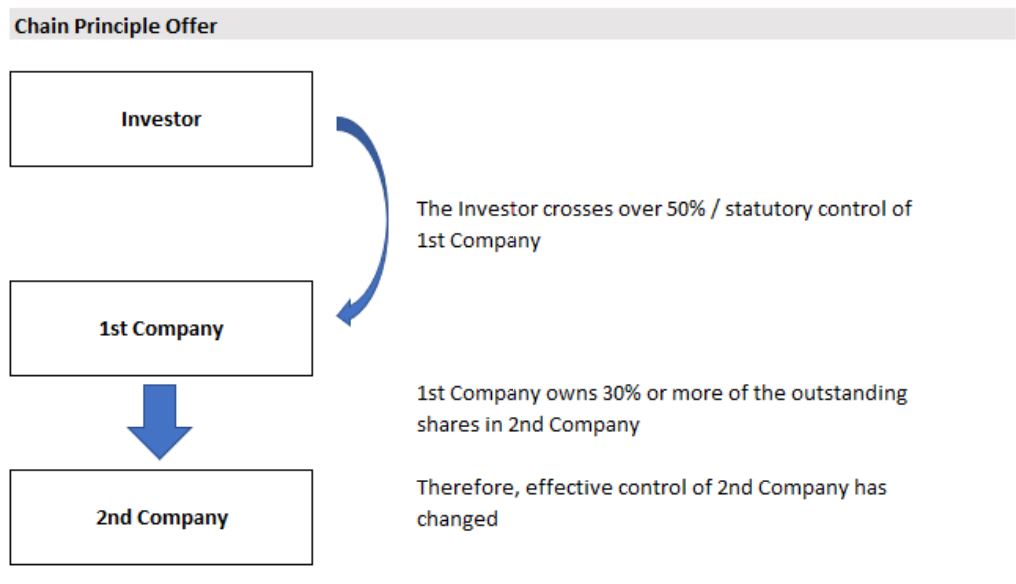 Per Practice Note 19 of the Takeovers Code, “the offer price should be calculated objectively taking into consideration the transacted price for shares in the first company and the relative value of the second company” i.e. how much of the price paid for the first company is attributable to its holding in the second? 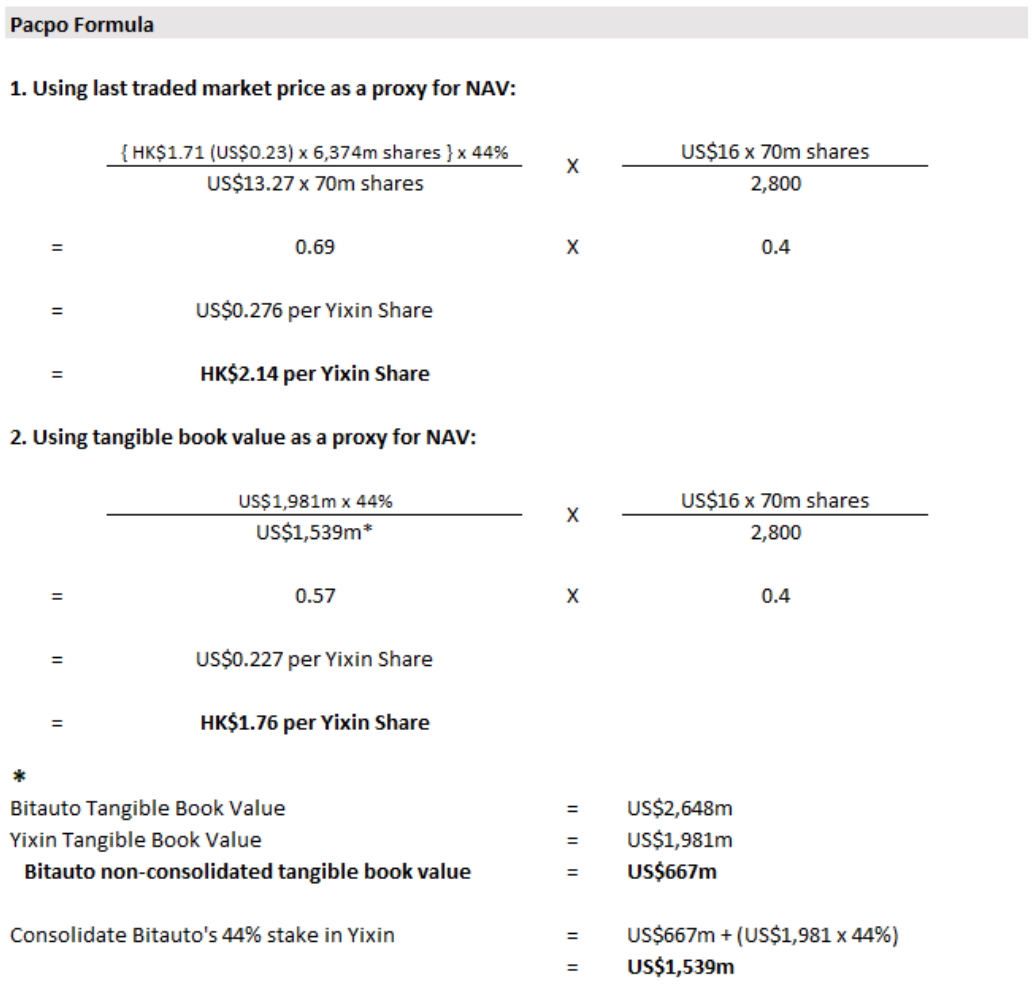 Having an idea of the potential upside in an investment is only one part of the equation, one also needs to consider the likelihood of being correct and the downside when we are wrong. From a fundamental perspective, the downside is difficult for me to judge as I am not an expert in Consumer Finance companies. However, at 0.7X tangible book value, with a 33% equity ratio, and not trading much above all-time lows, I think it would be hard to make a case that it’s overvalued.

Looking at the stock price chart, it doesn’t look to me like a high probability of a transaction is being priced in, with the stock declining significantly after an initial pop on the day of the announcement:

One argument I could imagine people making is “well a lot has changed in the last few weeks with the Coronavirus outbreak etc. so the probability of the Bitauto deal going through has declined.”

That was my initial thought too, however, if that were true, one would expect the spread between Bitauto’s market price, and the US$16 takeover price, to have widened over the same period (i.e. pricing in a lower chance of success). However, this is not the case, as Bitauto stock immediately jumped to US$14.95 on the day of the announcement and has remained in a relatively tight band since.

While Bitauto’s price (green line) has remained fairly steady, Yixin (blue) has declined ~25% since the announcement pop. This indicates that either a) the market got over-excited on day 1 and misjudged the price or b) the market is placing a lower probability on the Yixin deal completing (which doesn’t make sense because if the Bitauto deal happens, an offer for Yixin must be made).

So, in summary, I don’t know what the downside is. However, as usual I will use a range and cap it at an arbitrary 30% as I believe the lack of arb’s in the stock, and our relatively small position size compared to ADV would allow for this type of exit in a worst-case scenario.

To work out whether the current ~HK$1.68 price offers an attractive bet or not, we have to run a scenario analysis. The first step being, to work out what the probability of the Bitauto deal closing is. To do that, I revert to the “wisdom of the crowds” and back-solve what the market implied probability is (as I believe the US merger arb market to be pretty efficient): 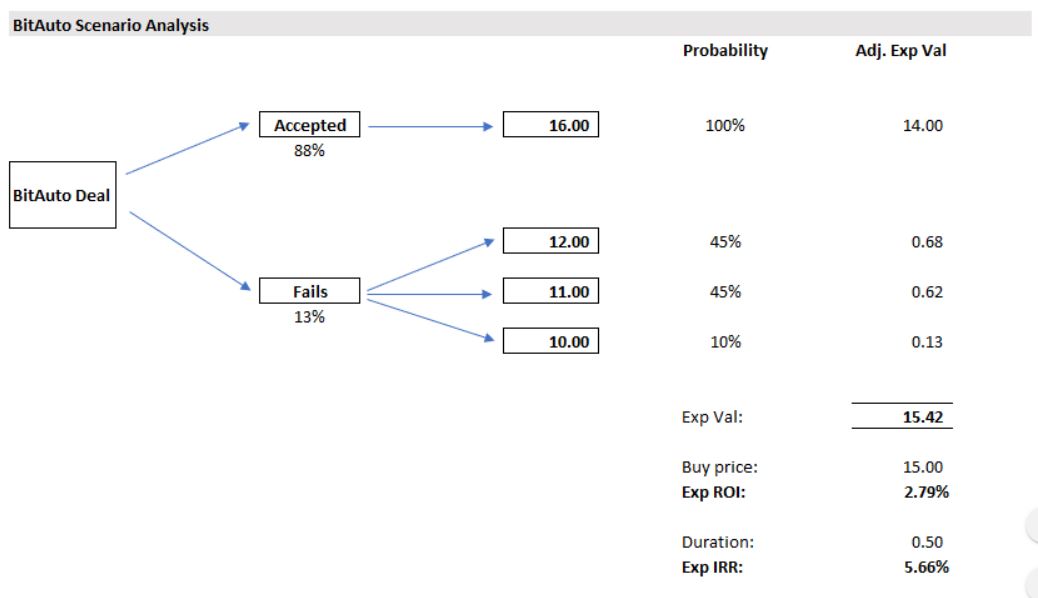