Liberty SiriusXM is a tracking stock for Liberty Media’s 72% stake in Sirius XM Holdings (satellite and online radio broadcaster – SIRI). As most tracking stocks it trades at a significant discount to NAV, which since 2018 used to be around ~30%, but has reached 40%+ over the last couple of weeks. Aside from the market panic there does not seem to be any apparent reason for this move. Thus the bet is on a swift return to the mean, offering 10% upside. SIRI borrow for hedging is available an cheap (0.57% annually at IB).

I think it is a matter of when and not if the discount will return <30%. And the main risk here is dedicating capital to this transaction instead of other potentially more lucrative market-recovery type situations. However, these opportunity costs can be avoided by buying LSXM outright (skipping the hedge) and betting simultaneously on the discount return to the mean as well as the recovery in SIRI stock price (down 29% since Feb, so rather in line with the broad market).

For more background on LSXM and SIRI please refer to the previous write-up on SSI and as well as this VIC article.

In the past (see graph below) there were other similar opportunities of LSXMA discount widening, however at the time SIRI borrow was tight/expensive and the discount differential was not as wide.

Liberty’s management (John Malone and Greg Maffei) has a very strong reputation of value creation for shareholders and their interests are well aligned (from VIC):

Moreover, management has been hinting on completely eliminating the LSXM discount for a few years already. 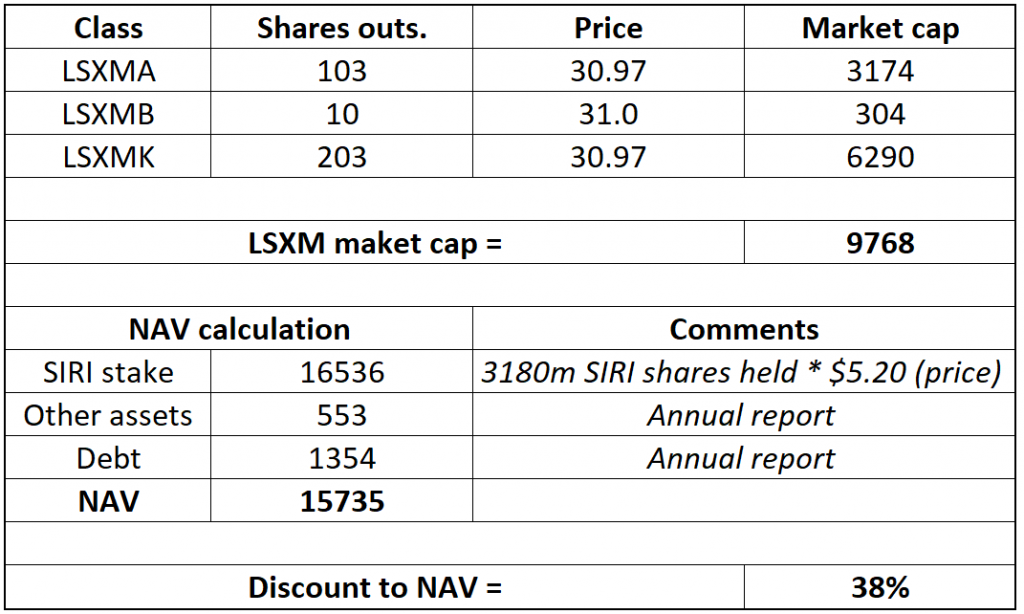 Historical discount to NAV during the last two years:

Note: SIRI stake makes up 97% of LSXM NAV. Minor fluctuation in values of other assets/liabilities have little impact on the overall calculations – so for the sake of simplicity I have used figures from Dec’19 financials for ‘other assets’ and ‘debt’ during the whole time period (i.e. these are not adjusted for every quarter).