On the 30th of Sep, 2019 Freudenberg (Acquirer) signed an agreement to acquire Low & Bonar PLC (LSE:LWB) from a group of shareholders for approximately £110 million. Under terms of the transaction, Freudenberg will pay £0.155 per share, representing 40% upside to current prices.

Low & Bonar’s shareholders approved the transaction on the 5th of Nov and merger remains subject to EU antitrust and court approvals. The scheme will become effective during H1 2020 and the long stop date is June 30, 2020. LWB’s year-end update noted that competition approval remains the key outstanding condition and that European level review is ongoing in the normal course. No further updates on expected timeline were provided.

Merger consideration will be funded from Freudenberg’s existing cash resources. The acquirer has agreed to pay Low & Bonar, a break payment in the amount of £1.5 million if the acquisition lapses or is withdrawn as a result of acquirer invoking.

Company had a challenging period in 2017 and 2018 during which it changed Chairman, CEO and CFO and reversed its previous strategy to grow its Civil Engineering division. Moreover, in early 2019 it had to make a £50 million equity raise at the price of 15 pence (current buy-out price), which provided some necessary support to the balance sheet and enabled the company to begin much needed investment, especially in its Asheville facility in the US and both CTT plants in Germany. Whilst progress has been made in reducing net debt, continued challenging market conditions and ongoing operational inefficiencies resulted in lower profitability than anticipated during 2019 and hence greater pressure on the banking covenants.

So in a way current transaction is a result of poor company performance and if it fails to complete Target is likely to move towards bankruptcy.

Freudenberg looks as a credible company. It develops leading-edge technologies and products and services for about 40 markets and for numerous applications: seals, vibration control components, technical textiles, filters, specialty chemicals, medical products and the most modern cleaning products.

In 2018, the Freudenberg Group employed more than 49,000 people in some 60 countries worldwide and generated sales of more than €9.4 billion.

Freudenberg has given assurances to the Low & Bonar Directors that existing employee rights, including pension rights, of current employees will be fully safeguarded. Freudenberg’s intention is to close Low & Bonar’s London head office and provide the respective functions from Freudenberg’s existing offices in the United Kingdom or Freudenberg’s headquarters in Weinheim, Germany. This office will be closed within 18-24 months following completion of the Acquisition as part of the wider integration process, but such closure is not expected to take place within the first six months following completion of the acquisition.

From Acquirer perspective, given it plans to close Target’s head office, the transaction makes a lot of sense. Target’s G&A expenses accounts for GBP 40m, so if you eliminate those your EBITDA may double from roughly GBP 35m (using May’19 TTM figures) to more than GBP 70m. If we look on the multiples of this transaction, even before potential cost synergies it is not expensive at EV/EBITDA 7.0x. Therefore, I believe that Acquirer is reasonably interested in the transaction and may extract some value by optimizing Target G&A expenses. 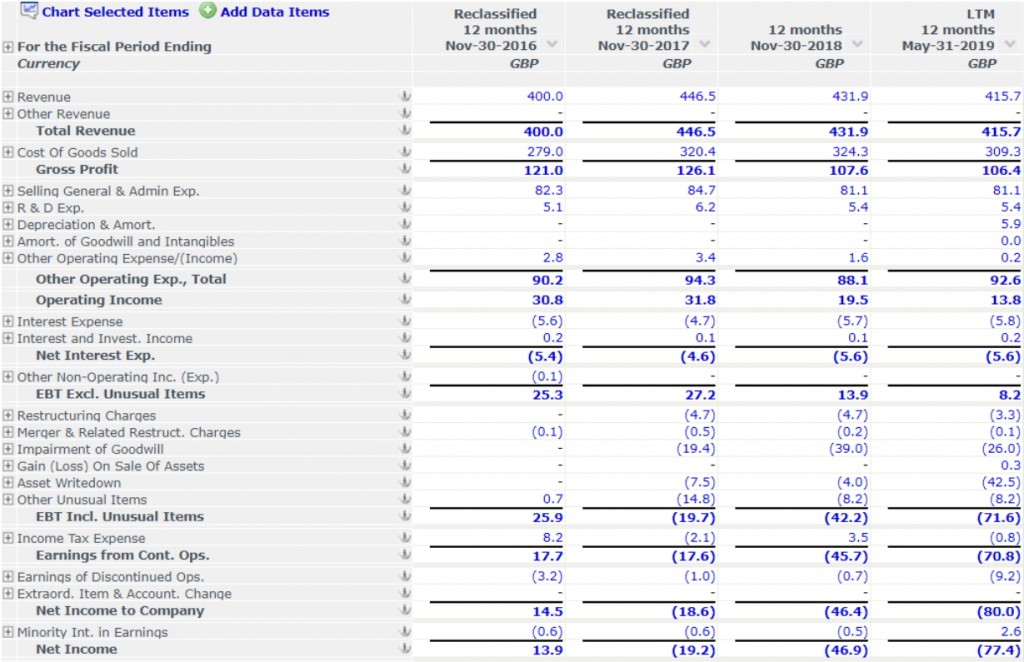 Results have deteriorated further over the last half a year. From the year-end update:

Further to the trading update of 20 September 2019, conditions affecting the Group’s trading remained largely unchanged during the period to 30 November 2019.  As a result, the Board currently expects, subject to audit, reported revenue for the year to 30 November 2019 from continuing operations to be £317m, underlying EBITDA to be approximately £18m and underlying profitability before taxation and amortisation to be approximately break-even

However, worth noting that LWB sold Construction Fibres and Needle-punched Non-Wovens businesses in summer of 2019 (and before the current acquisition announcement). These businesses represented c. 18% of 2018 revenues, so the 2019 revenue decline is not as sharp as might seem initially – effectively 11% drop in revenues for continuing operations from GBP354m to GBP317m. This is in line with 10% decline in H1 2019, so seemingly nothing the acquirer should be surprised about.

As the deal has already been approved by shareholders the only outstanding risk is approval by European commission of competition. Given the tiny size of the business of the Target it doesn’t look as a big concern. Acquirer has already secured the approval from the Russian authority.

Company is in breach of financial covenants from debt holders that has been waived to allow to accomplish the transaction. Covenant tests are scheduled to restart restart at 31st of May 2020 (threshold requirement of 3xEBITDA vs current levels of 5xEBITDA).

Agreement was reached with Low & Bonar’s lenders to amend the terms of the Group’s financing facilities to assist the Company in progressing the Acquisition.  As part of these amendments the testing of financial covenants as at 30 November 2019 was waived.  As set out on 10 October 2019, should the Acquisition lapse, covenants would be reinstated and tested within 14 days with respect to the financial position as at the month-end previous to such lapse.  In the event that the Acquisition does not complete by 30 June 2020, the scheduled covenant test as at 31 May 2020 would occur.  Shareholders should note that there remains a significant risk that, should the financial covenants be tested, the Group would fail to comply.

Why The Opportunity Exists

I couldn’t really think of anything except the obvious reasons of a small size, low liquidity and absence of any coverage. I couldn’t even find a ticker on seeking alpha, which probably is the main reason why this stock offers such high returns. Another reason is lack of update on the timeline and relatively long timeline for such a small transaction. Right after the announcement LWB was trading at 14.5p/share and then gradually declined to current levels during the next 6 months.