The graph below details the individual MoM performance of all the active/closed cases (excluding Quick Ideas) during March. 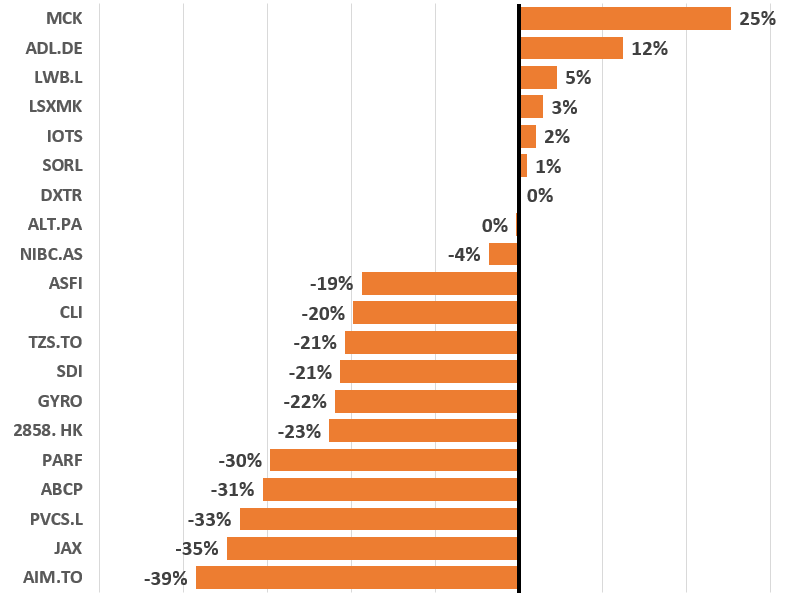 McKesson (MCK) +$1200 in one month
Another standard split-off transaction whereby McKesson distributed its remaining stake in Change Healthcare. Every $100 of MCK shares accepted in the tender were converted into $107.53 of CHNG shares, subject to an upper limit of 11.4086. Due to odd-lot priority provision, owners of less than 100 shares had an option to earn almost risk-free $1200, while the rest of the market was in downfall.

ADLER Real Estate (ADL.DE) -3% in two months
German arbitrage situation where ADO Properties was buying Adler Real Estate in an all-stock transaction. It was expected that in case the tender offer acceptance rate ends up being below 75%, ADO will proceed with a further takeover offer at a higher price. However, 83% of shareholders have participated in the initial tender eliminating the chance of increased proposal.

Altran (ALT.PA) -1% in 1.5 months
Consulting giant Capgemini’s friendly takeover of Altran at €14.50/share resulted in CAP owning 54% stake in ALT. Nevertheless, the opposing shareholders have filed in court arguing that the agreed takeover price is unfair and was driven by numerous corporate governance failings. If the court had invalidated the offer, CAP would have to rerun the whole process and make a new offer potentially at a higher price. However, the court judged in favor of the company eliminating any further upside from this merger.

Bolsas y Mercados Espanoles (BME.MC) -4% in two months
BME (operator of Madrid stock exchange) used to trade at 2.5% premium to €34/share merger offer from SIX due to expectations of a potential bidding war. A number of other exchange operators appeared to be interested in BME and were likely waiting for regulatory response before proceeding further. In a competitive bidding €37/share merger consideration for BME seemed easily justified. However, due to changed market environment and sell-off in the markets, the bidding war no longer seems a feasible expectation. BME share price dropped just slightly below the offer, so given further uncertainties with regulatory and shareholder approvals, it seemed tenable to close the position with a minimal loss.

Medley Management (MDLY) -75% loss in 4 months
MDLY / MCC / Sierra merger saga was ongoing already for more than 1.5 years, while the transaction is regarded as cash-out by MDLY insiders. MDLY was trading at a discount even to the cash portion ($2.96/share) of the total consideration indicating a material risk that is perceived by the market. During March MDLY and MCC sold off sharply and the merger under previously announced terms no longer seems feasible. There are rumors that the merger will get terminated, although the company’s IR continues to deny this. In the absence of merger, MDLY is very likely to declare bankruptcy or significantly dilute shareholders.

J. ALEXANDER’S (JAX) -50% in 10 months
Restaurant chain JAX received unsolicited and non-binding offer from its 8.6% shareholder Ancora Advisors (supported by another 6.6% holder). The board quickly rejected it, however, an eventual sale seemed likely. Later the board announced an extension of strategic review noting acquisition as a potential option, however, there were no further updates on this for 7 months. Due to the COVID-19 most restaurants of the company are now closed and business is likely to be significantly impaired, so any kind of M&A is unlikely in the short/medium term.

Cornerstone Capital (CGP.V) -14% in 13 months
This was a potential all-stock merger between two junior miners – Cornerstone Capital and SolGold – which together own Ecuadorian copper-gold project Cascabel. SolGold’s indicative all-share offer was rejected straight away, however, it seemed likely that either the offer gets sweetened or CGP will be acquired by one of its major shareholders – mining giants (Newcrest, BHP Billiton), which appeared to have a strong interest in Cascabel. Nonetheless, even though 5 months have already passed since Newcrests’ standstill agreement expiration, no further interest from the potential buyers was announced.