This idea was discussed in Maran Capital quarterly letter to investors (January 27) and shared by Michael.

Standard Diversified is a holding company that trades at 9% discount to its NAV where the main asset is 50.1% stake in listed tobacco products distributor Turning Point Brands. In Nov’19 both firms have announced intention to merge, which as a result should unlock SDI NAV and eliminate the discount. Before the transaction is consummated SDI intends to dispose all of its other assets leaving only the stake in TPB. Other assets are:

Current SOTP value of SDI (see below) stands at $15.1/share (9% upside). Additionally, as noted by Maran Capital, there is also a possibility that SDI might get a slight premium (increasing the potential upside) for giving up the control of TPB as it previously happened in Spectrum Brands/HRG Group transaction (2018). HRG held 59% of Spectrum as its principal asset. Through reverse merger HRG shareholders have received the amount of shares in the combined company equal to the number of Spectrum shares that were held by HRG + an additional bonus of $200m (6% of the stake value).

Since the announcement no further updates were provided except for the notice from SDI in Jan’20 on intentions to hold a shareholder meeting in the next several months. The combination would have to be approved by a special committee of TPB and shareholders of both companies (not clear if minority vote will be required). Over 90% of SDI shares as well as voting control is held by hedge fund Standard General (focuses on event driven opportunities), which most likely orchestrates the whole thing behind the scenes in order to eliminate the discount. It also owns about 3.4% of TPB.

TPB borrow for hedging is available and cheap.

SDI Sum of the Parts

Calculating sum of the parts value of SDI from regulatory disclosures is a bit complicated as financials are consolidated. Maran Capital in its calculations uses data from the Aug’19 investor presentation: 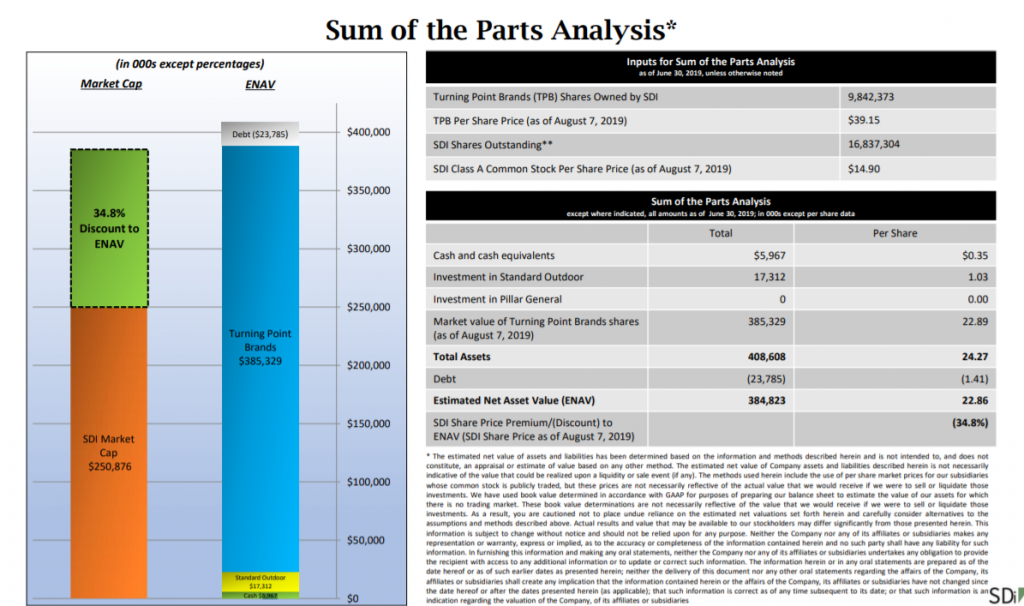 However the most recent 10Q (September’19) shows slightly different situation:

Therefore the updated SOTP valuation is:

* Class B shares are identical to Class A, except that they have 10 voting rights instead of 1 and are convertible into Class A at a 1-for-1 ratio.

According to their website Standard General (SG) focuses on “companies with complex capital structures that are undergoing dramatic change or are faced with material events”. The fund has acquired a controlling stake in TPB in Q2 2016. Then in 2017 SG conducted a reverse merger with SDI (which at the time was a shell company called Special Diversified Opportunities) – as a result SDI has received 52% ownership in TPB, while Standard General has received 88% of Class A and 90% of Class B shares of SDI. It seems the intent of SG was to create a holding company that aside TPB stake would be used for multiple investments, however now that the plan fell through (with unsuccessful insurance and billboard investments), it has decided to collapse the structure and eliminate the discount.

According to the most recent 13F filing Standard General has ownership in 5 companies, with SDI and TPB stakes being the smallest within the portfolio.