This idea was shared by Paul.

This is an MBO (management buyout) of a Chinese supply chain management firm.

On the 16th of March Li & Fung (LF) has announced a privatization by management and Singaporean private equity company GLP Group. Consideration stands at HK$1.25/share in cash. The main risk is that minority shareholders block the transaction.

LF is controlled by the Fung Family, which owns 1/3rd of the company. As is usual in Hong Kong, the offer will have to be approved by shareholders – a majority in number (headcount) and 75% in value of total shares voted + 75% of  disinterested shareholders (66.7%). Also the offer can’t be opposed by more than 10% of outstanding shares. So the blocking stake is only 6.67% of the unaffiliated shares.

Initially the company intended (9th of April) to delay the dispatch of scheme document until 31st of May. However, the document was issued earlier on the 19th of April and shareholder meeting was set for the 12th of May. Closing is expected on the 26th of May, while the cash payment is to be received on or before the 4th of July.

Given these changes in timing and credibility of the buyers (billionaire founding family, which knows the business very well and GLP – large investment manager with complementary assets & US$89bn AUM), the risk of them walking away is minimal.

At the same time due to recent under-performance of LF business and covid-19 impact on top of that, it is quite possible that shareholders will be fine with cashing out at 150% premium to pre-announcement price and 50% premium to pre-covid price (more information below).

However, when it comes to shareholder approval, the risk is quite significant, especially as there is one shareholder who can block the offer single handedly (owns 10.9%). Moreover, downside is tremendous as well – 57% to pre-announcement levels, but could be much higher due to the lockdowns that happened in the Western countries (where LF clients operate) since the announcement.

Essentially Li & Fung is a middleman between Western brands (including many major brands like Nike, Tommy Hilfiger, Walmart) and Chinese manufacturers. 78% of turnover comes from North America and 14% from Europe. LF operates in 3 business segments: 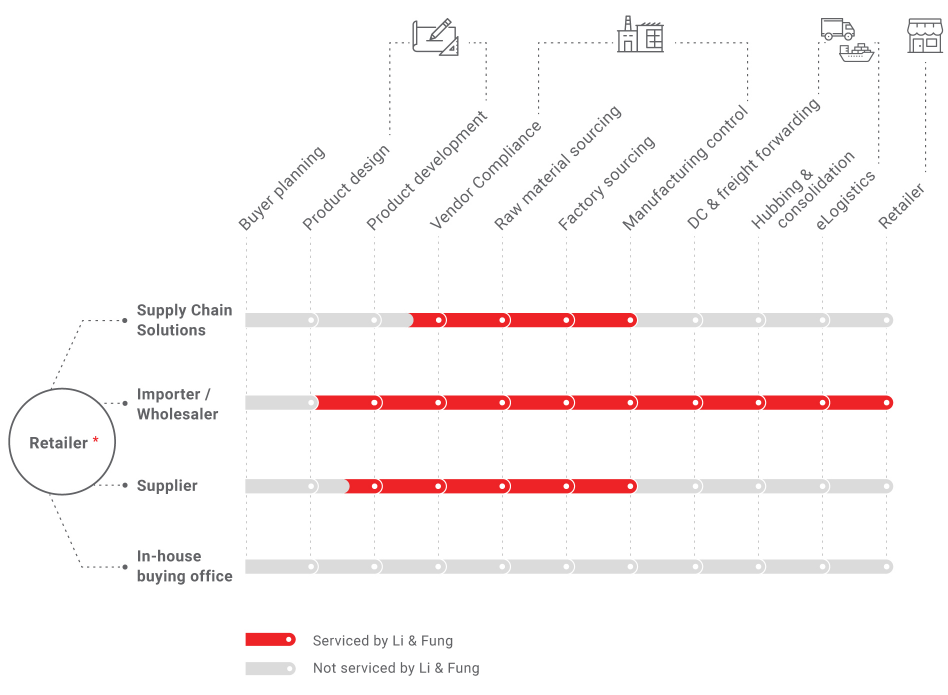 The company has been strongly hit by rise of e-commerce and the crisis/changes in the traditional retail industry – bankruptcies, store closures, inventory reductions etc. From the annual report:

In 2019, the multi-year destocking trend and store closures in retail industry persisted, negatively affecting turnover. Turnover was also impacted by decisions made by certain customers in earlier years to establish their own buying offices.

As a result, its revenues and EBIT have been shrinking consistently since 2013 and over the last 5 years LF has lost 39% of revenues and 75% in EBIT. 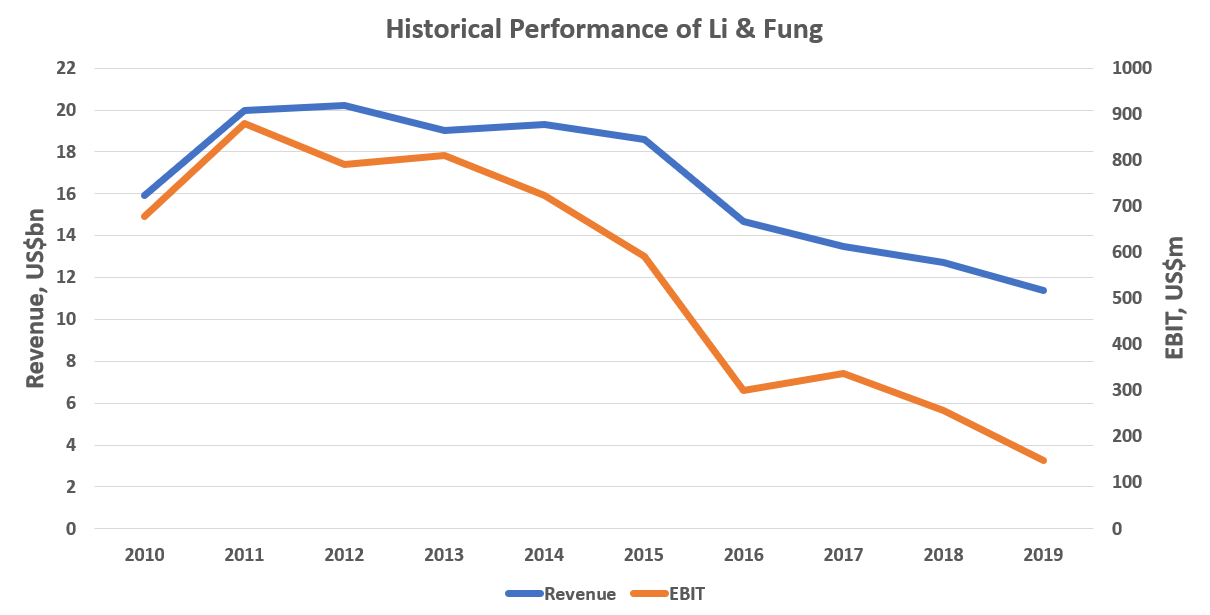 The company has been trying to combat these trends by improving productivity, streamlining its processes, diversifying its sourcing to other countries besides China and making use of technology such as 3D apparel design, however it wasn’t able to reverse the decline. From the proxy:

In light of digital disruption to the retail industry, the Company has undertaken restructuring efforts to reposition its businesses and to improve its competitive advantage. Although the Company has implemented a number of strategic changes to adapt to shifting market dynamics, the Company’s financial performance has remained under pressure. In addition, economic headwinds, which are expected to continue, are having a significant adverse impact on the Company’s business activities.

So, on top of that, while the supply chains in China are returning to normalcy, recent covid-19 outbreak and lock-downs paralyzed the retail business in the Western world, which means that LF will receive another strong hit this year. Last month CEO stated:

As the outbreak expands into North America and Europe, it may further affect retail sentiment, which is already being battered by economic weakness. At this juncture, we believe the impact will be felt throughout the year.

LF argues that its digitalization/transformation efforts will show better results while being private as it will release the company from short-term goal pressure. At the same time the partnership with GLP and its complementary assets, global customer network, technological competences will boost the whole process. These arguments are clearly positioned to win shareholder approval.

Second largest shareholder is investment manager Silchester International. It owns 10.9% of the company + 2% with affiliates (which seem to have been selling down LF since March) who are likely to vote in the same manner. Silchester became a major shareholder in 2017, then raised its stake to 8% in 2018 and to 10%+ in 2019. So Silchester bought a majority of its stake at HK$3.00/share+ and is currently in deep losses. So its vote here is definitely a risk, but again, given the current situation and the fact that before the announcement Li & Fung has traded below HK$0.50/share and is likely to drop way below that if the offer goes bust, is somewhat reassuring.

GLP is a large Singaporean investment manager with assets in logistics, real estate, infrastructure, finance and has a global property portfolio of approximately 62 million square meters. It operates across Brazil, China, Europe, India, Japan, and the U.S.

GLP will finance this acquisition and it seems that US$930m needed for the transaction should not be a problem here. It is also currently in the process of another US$1bn acquisition (logistics assets).