The graph below details the individual MoM performance of all the active/closed cases (excluding Quick Ideas) during April. 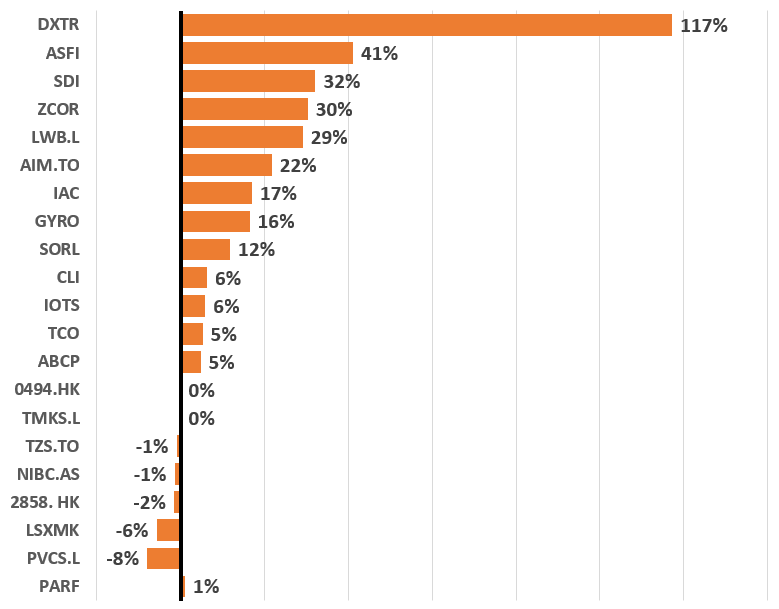 Low & Bonar (LWB.L) +35% in 1.5 Months
Freudenberg signed an agreement to acquire technical textiles manufacturer Low & Bonar PLC for £0.155/share in cash. Approval from the target company shareholders had already been received, while consent from the EU regulators seemed likely given the small size of the transaction. Spread stood at 40% at the time of write-up and widened even more (to 200%+) during market sell-off. The main risk was that Freudenberg could’ve used the COVID-19 situation (and its impact on LWB’s business) to renegotiate the terms or walk away from the transaction. Nonetheless, EU regulators gave their consent earlier than expected, which has likely limited the possibilities for Freudenberg’s to walk away and the merger is now expected to close shortly (12th of May) on original terms. 3.5% low-risk spread remains.

Tallgrass Energy (TGE) +40% in One Month
Oil & gas pipeline company Tallgrass Energy was due to be acquired by Blackstone for $22.45/share in cash. Shareholder approval seemed almost guaranteed as buyers already owned 44% of TGE, while the condition of minority shareholder approval was waived. Spread widened from 2% post announcement to 40% at the time of the write-up. The main risk was Blackstone terminating the merger or asking to change the terms given sell-off in the energy industry. However, Blackstone seemed like a credible buyer, which owned 44% of TGE and had already intended to buy it out fully a number of times before. Eventually, shareholder approval was received and the transaction closed swiftly after that.

Asta Funding (ASFI) – Going Private +12% in 6 Months
Controlling owners (60%) of Asta Funding submitted a non-binding proposal to take the company private at $10.75/share (below book value). The transaction was subject to approval by the special committee as well as minority shareholders. Strong balance sheet of ASFI (debt-free and 80% of BV in cash) and a decent track record of the management inspired confidence in the credibility of the offer. Eventually, not only a definitive agreement was signed, but the offer price was also increased to ($11.47). As a result, the spread narrowed to 2%, and the trade was closed resulting in 12% return over half a year.

SORL Auto Parts (SORL) +14% in One Month
A rather standard case of an US-listed Chinese company taken private by the controlling shareholder (59%) at $4.72/share in cash. This is an older case on SSI, that was closed after the spread narrowed to 2% in Jan’20. However, in March the spread widened significantly (at one point reaching 70%) with the backdrop of overall market sell-off. Although the company announced that COVID-19 has made a significant impact on its business, apparently it was still moving ahead with the transaction on original terms. As the spread has once again narrowed to 2%, the idea was closed again with 14% return in a month.

Standard Diversified (SDI) – Merger Arbitrage +4% in One Month
In Nov’19 Standard Diversified announced a merger with its main subsidiary Turning Point Brands (also listed). This transaction was set to eliminate SDI’s discount to its NAV. Satisfying the agreed conditions SDI has disposed of its two other assets (price was in line with the estimates) and a definitive agreement was signed in the beginning of April and spread had virtually closed. However, likely due to the COVID-19 impact the final consideration was reduced by 3%. Nevertheless, this trade resulted in 4% within 3 weeks.

CBA Florida (CBAI) +10% in One Year
CBAI is a shell company that is in the process of full liquidation and is trading at a discount to net cash. CBAI was due to distribute a major portion of its cash shortly after the asset sale (2 years ago), while the full liquidation was expected after the release of escrow funds in May’20. However, everything turned out quite differently. The initial distribution is due to be paid with almost 2 years delay and only for part of the funds on the balance sheet. And recently released proxy shows that full liquidation is expected to take another 4.5 years with far higher cash burn projections than estimated initially – most of the remaining funds will be consumed by the liquidation process. As the margin of safety was sufficient, the trade still ended up with 10% profits, however, this situation is a good example of the misalignment of insiders/shareholders’ interests and management’s self-service.

Liberty Sirius XM (LSXMK) -3% in One Month
Liberty SiriusXM used to be a tracking stock for Liberty Media’s 72% stake in Sirius XM Holdings. As a result of the market crash in March SiriusXM discount to NAV widened from the average ~30% (since 2018) to over 40%. Aside from the market panic, there seemed to be no other reason for this. However, the straightforward arbitrage thesis fell apart after Liberty Media unexpectedly announced re-attribution of assets between SiriusXM and another Liberty’s tracker, which significantly complicated the arbitrage and reduced the likelihood of eventual discount elimination.