The idea has been shared by Raphael.

This is another large cap situation, so the market likely reflects the risks more or less accurately.

Largest Chinese online classifieds company 58.com (listed on NYSE) has received a non-binding preliminary buy-out proposal from a consortium of PE firms and Jinbo Yao (founder, chairman & CEO) at $55 per each ADR share. The spread can partially be explained by the the non-binding nature of the proposal, while there also seems to be quite a bit of opportunism here as the offer comes shortly after COVID-19 outbreak/market fall (WUBA traded at $65-$69/share mid January). However, until mid-May WUBA used to trade at about 6% spread and then gradually widened to the current levels. Besides increasing political tension between US and China, I haven’t found any news/updates explaining the fall in WUBA price. 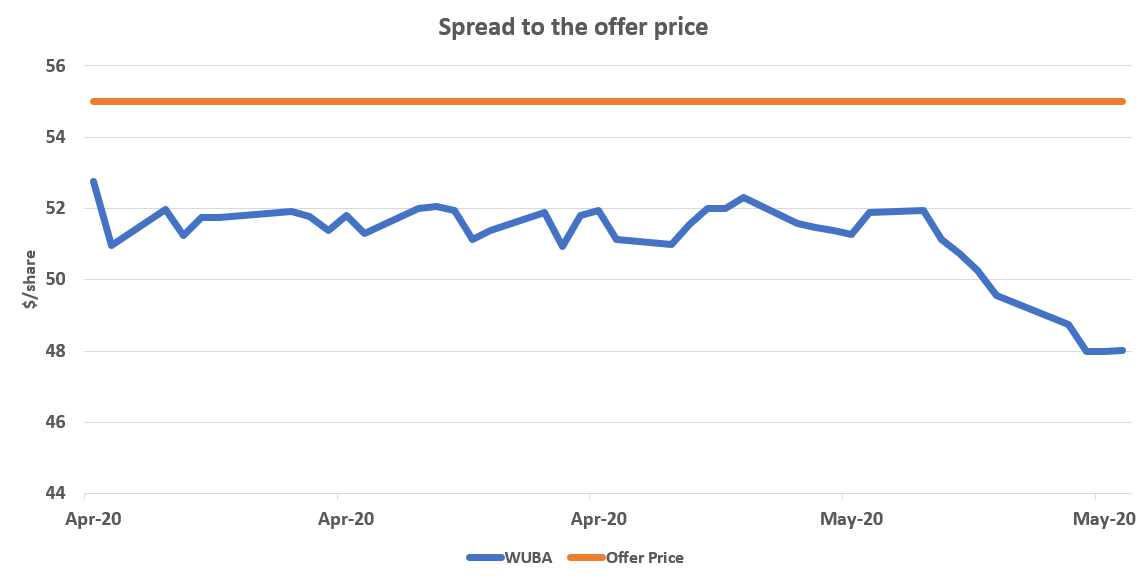 The positives are that buyers definitely seem credible (financing not a problem) and already have 44.1% of votes in their pocket (2/3rd of majority approval will be needed).

The whole play, however, revolves around  Tencent’s decision as the internet giant owns 28.3% of WUBA voting shares and can almost single handedly determine the outcome of the voting. There is also a possibility that Tencent might eventually join the consortium, however so far its intentions are not clear. Tencent has been an investor since 2014 when it acquired a 19.9% stake (currently owns 22.4% of common shares) for about $21/share. So the internet giant is sitting on some profits, however it may be of little importance as this transaction is relatively tiny and Tencent could decide to keep their stake for some kind of strategic/long term benefits.

The consortium together has 44.1% of voting power. Transaction will be financed with a combination of equity + debt and it should not be a problem given that buyers are large private equity funds.

Overall, 3/6 directors are affiliated with the buyer consortium, which indicates that the offer is likely to get accepted by the company.

However, the main issue lies with shareholder approval.

The company owns multiple large online classified businesses in China. It was founded in 2005 and in 2013 did an IPO for $17/ADS.

WUBA states that the impact from COVID-19 has been significant in Q1 (results are not out yet) as its largest business user base consists of SMEs:

Despite that, the company paints a brighter picture going forwards saying that recovery has already begun and that the impact is expected to be short-term in nature.