This is a merger between two auto parts manufacturers.

On the 28th of January’20 vehicle propulsion system manufacturer Delphi Technologies has agreed to get acquired by its larger peer BorgWarner for 0.4307 BWA per each DLPH (7% upside at current prices). Conditions include DLPH shareholder approval (meeting date is not set yet) and a number of regulatory approvals – FTC, DOJ and European Commission as well as antitrust consents from China, South Korea, Mexico, Russia and Turkey. FTC approval has been already received on the 2nd of April, however the most important consent will likely be from EU regulators as 39% of combined company sales will be generated in Europe (32% in NA).

Overall, this is a strategic acquisition and given the events described below it seems that the risk of buyer walking away now is minimal (as it would’ve happened already otherwise). Transaction size (just over $1bn) and DLPH trading until the end of March (more details below) indicate that there is no major antitrust risk here as well. Finally, given the current situation of auto parts industry, it seems that shareholder approval should not be a problem.

In case things go south the downside should be minimal. Since the 21st of Feb DLPH is down 29% already, while Dow Jones Auto Parts index fell only 18%, BWA – 13% and another peer VC – 9%.

After the announcement the spread was tight at 1%-3%. The spread exploded with the market fall in March, but only for a short period of time (the first spike in the chart below) and then went back to trade at 6%-8% by the end of March. So the market seemed relatively confident in the transaction closing even with the rest of the market still in panic mode. 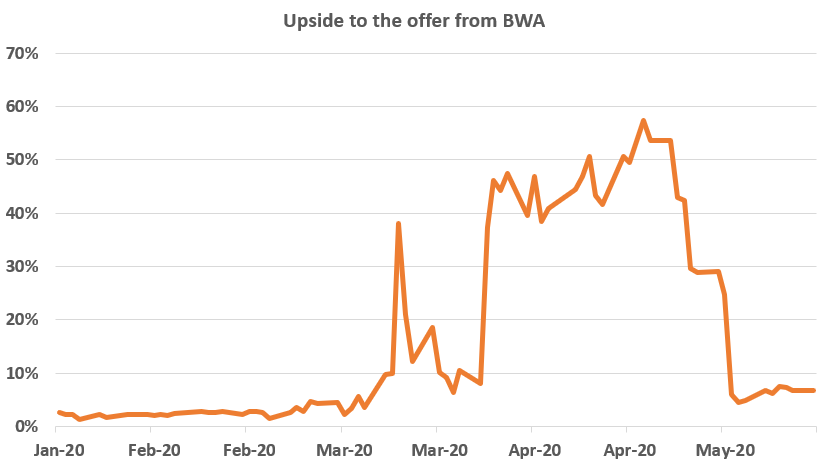 However, the spread has widened again drastically on the 31st of March when DLPH decided to fully draw its $500m revolving credit facility without BWA’s consent. Although Delphi stated that in light of troubling economic situation the additional liquidity was needed, the buyer has stated that the company has made a material breach to the agreement, which if not cured in 30 days, will be terminated. Given, the market situation, lockdowns and COVID impact on the auto industry it seemed highly likely that BWA was looking to get out of the transaction.

Quite surprisingly, on the 6th of May, companies have announced that they have reached an agreement and the merger is moving forward, although consideration has been cut by 5% to 0.4307 BWA per each DLPH (from previous 0.4534). Both companies claimed to stay committed to closing, which is still expected in H2’20.

DLPH is engaged in development, design and manufacture of vehicle propulsion systems (fuel injection, powertrain, electrification & electronics etc.). It supplies to OEMs of both light and commercial vehicles. Shareholders:

It also sells mainly to lightweight vehicle OEMs (83%), while sales for commercial vehicle applications makes up only 9%.

Q1 results showed BWA revenues falling 8%, which outperformed the market average of 20% (DLPH sales decreased 18%). Nonetheless, the impact from COVID further on in the year will be substantially larger – 20%-27% (company’s estimates).

Overall, portfolios of both companies seem complementary. The merger will strengthen BWA’s electrified propulsion system and combustion segments as well as expand the BWA’s exposure to commercial vehicle OEMs (combined company will have 16%).