All stock merger of equals between two Texas based banks.

On the 12th of Dec’19 Texas Capital and Independent Bank Group signed merger agreement. Consideration stands at 1.0311 IBTX shares for each TCBI share. Borrow for hedging is available and cheap. Shareholder approvals of both companies are required – meeting dates have not been set yet. So far in Q1 reports both companies have re-affirmed their intentions to proceed with the merger. Closing was expected in mid 2020, but might get delayed due to covid-19.

Pre-covid this merger used to trade at 1% spread and then for a short period of time (second half of March) the spread widened to 9%-13% (while the market was in panic mode and numerous other M&A spreads have exploded much more) and then returned to 5% levels. So the market seemed to have had relatively strong confidence in successful closing of this transaction. Nonetheless, since the end of April (after Q1 results) the spread has widened again. This was likely driven by large provisions on couple of TCBI loans as well as complete silence on the merger during IBTX conference call (all questions were met with ‘co comments’). TCBI decided to skip the call altogether citing pending merger. Lack of additional assurances from management were interpreted as signs that something negative might be developing behind the scenes. 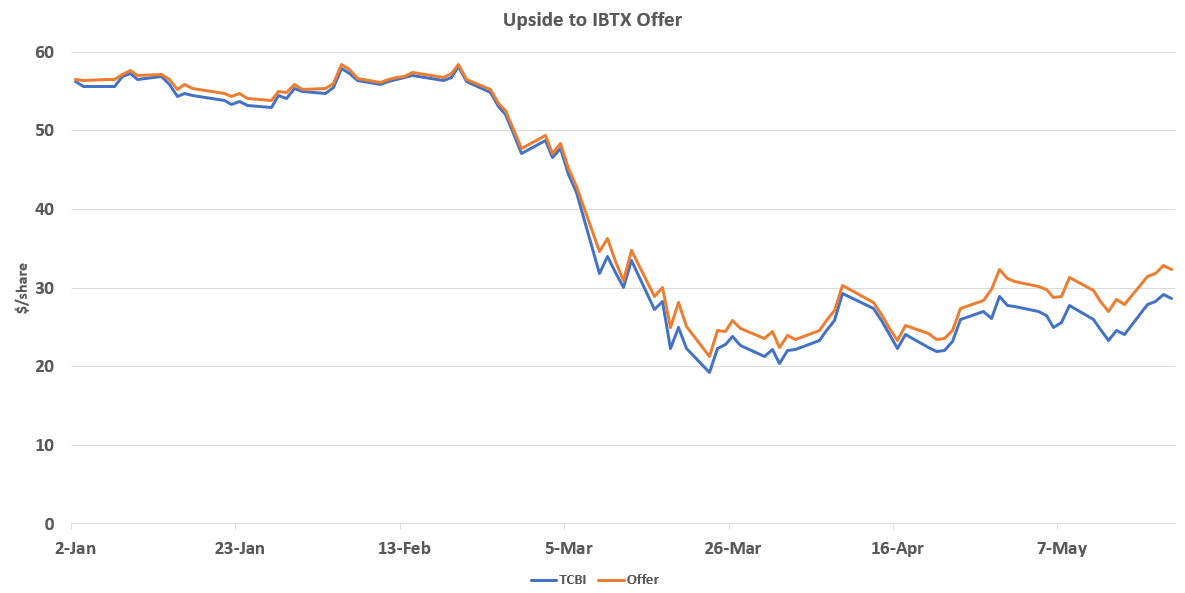 However, this merger makes a lot of sense from a strategic perspective and I do not think that temporary hiccups from covid-19 will influence managements’ opinion. Both banks are founder led institutions and finding the right partner has taken considerable effort (TCBI CEO claims he was looking for a good fit for a few years already). Both companies focus on commercial segment, however, their business models seem quite complementary as IBTX deals more with the needs of small/medium-sized local businesses, commercial real estate and also has a portion of residential real estate loans whereas as TCBI is more prominent in corporate banking and has strong technological platform. According to TCBI CEO (press release):

Business profile of both companies: 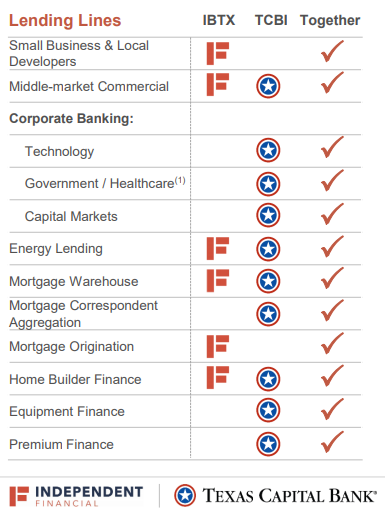 Note: Graphs are taken from the investor presentation.

Majority of IBTX loan portfolio is made of commercial RE to small/mid sized businesses (50% of LHI) – financing purchase of office buildings, retail centers, medical facilities and mixed-use buildings – and residential RE loans (13% of LHI), primarily made with respect to and secured by single-family homes, which are both owner-occupied and investor owned. Whereas for TCBI the key focus is on commercial lending (working capital loans, term loans, equipment financing and etc.) as well as mortgage finance (30 day mortgage warehousing, before these are syndicated and sold to other investors).

And so we want to be really thoughtful and any kind of fit, as I alluded to, over the years it kind of has to be that really just special, very difficult fit that we were looking for. And so, we found that here with David Brooks and Independent Financial. We knew over the last year or two that even with the success we’ve had with our different deposit verticals and mortgage finance and treasury business overall that a footprint of 12 branches, the same footprint we’ve had for well over 10 years was not optimum.

Nonetheless, there are certain worrisome aspects to consider as well:

Q1 showed a significant drop in performance and profitability due to covid situation, which resulted in $90m provisions (3% of BV) the majority of which ($55m) are attributed to two specific energy loans.

Q1 performance of IBTX has been significantly better compared to TCBI and with only $8.4m provision (0.35% of BV).

The company has been implementing an aggressive growth through acquisitions strategy and since 2010 made 12 acquisitions (TCBI being the 13th). This has resulted in fast growing enterprise (assets up 3x since 2016) and correspondingly high valuation (2x-3x BV). It also seems that these mergers were well-digested and the company has maintained a decent level of efficiency. The amount of goodwill the company carries on its balance sheet is also substantial (BV/share = $55.44, TBV/share = $30.08).

Most acquisitions were paid by stock and done in Texas. Moreover, the multiple payed (at least in the two recent large transactions) seems to be quite high:

So 15% IBTX shares voting in favor seems pretty much guaranteed (Vincent J. Viola’s son is a director of IBTX).