Split-Offs proved to be very lucrative in generating low risk arbitrage returns.  Just last week yet another split-off (ECL/APY) closed successfully with $2,100 ‘riskless’ return for hedged trades (c. +11%), while at at the same time unhedged positions delivered $10,000 (c. +50%-70%) in a month. The difference in pay-offs is clearly very material; however, higher returns seemingly come with higher risks (exposure to share price fluctuations).

In this article we look at historical data to assess pay-off profiles and riskiness of different split-off trading strategies – hedge vs no hedge as well as timing of entry and exit.

Since 2013 a total of 16 split-off transactions have been posted on SSI. All of these are listed below. The indicated returns are for the hedged odd-lot positions initiated after the transaction announcement. In most cases unhedged positions would have resulted in higher (but more risky) dollar returns.

What is the split-off transaction?

Before we dig into data analysis, a quick overview of what split-off arbitrage entails. Those familiar with this type of special situation can skip to the next section.

To put it simply split-off is a transaction usually come in two types:

In both cases parent company allows its shareholders to exchange parent shares for the ones of another listed company (let’s call it the ‘subsidiary company’). To incentivize the participation the exchange ratio is usually set at a premium (e.g. $110 of new shares in exchange for $100 of old shares) with upper limit in place to fix the max number of new shares to be received for each old share. Only small portion of parent company shares are accepted in the tender (around 3%-10%), therefore these split-off transactions tend to be heavily oversubscribed. As a result, only about 5%-10% of the tendered shares end up being accepted and exchanged (see proration factor graph below – proration has decreased with increasing popularity of these arbitrage trades).

However, all the listed split-off transactions so far have always included odd-lot provision, meaning that holders of 99 shares or less are being accepted on a priority basis. This allows to effectively escape the proration and have a guarantee that your shares will by accepted in the tender. Thus the ‘riskless’ arbitrage for odd-lot positions.

The timeline for such transactions usually goes like this: 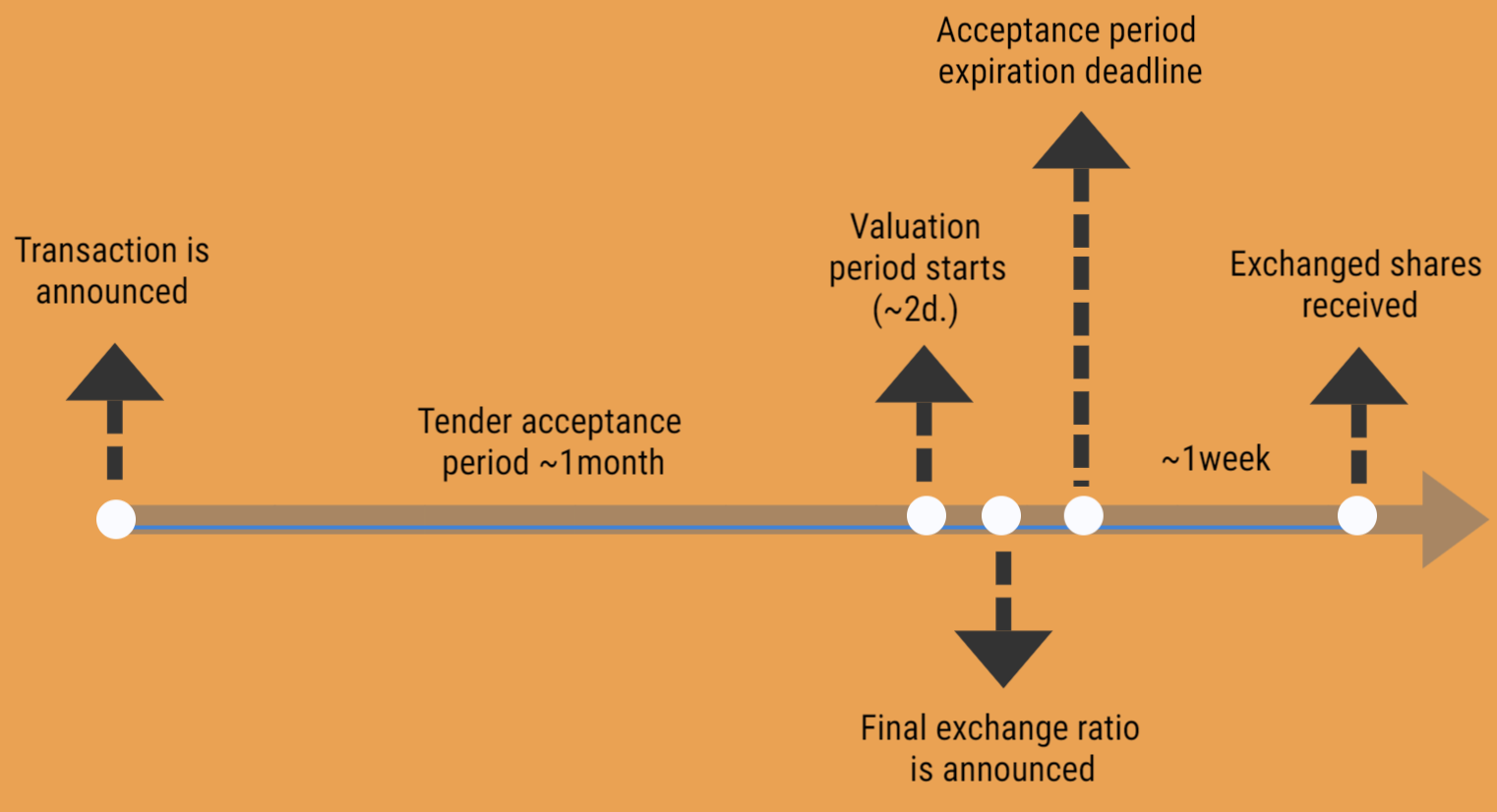 There are two important considerations one has to make before playing a split-off trade:

We analysed previous 16 split-off transactions and calculated the returns for each using 4 different arbitrage strategies – hedged vs. unhedged and with different timing for initiating the position. Borrow fee was not included in the calculations as for the majority of cases its impact was minimal (<1% upside consumed) and would not change the overall results. Short positions are usually held for a short period of time – about 1 month (if made after announcement) or 1 week (if opened after the final ratio), so even in the situations where borrow fee got very expensive (e.g. borrow for LLY/ELAN appeared 3 days before final ratio was set and was priced at 70%/year), the actual cost of hedging decreased upside only by 1%-1.5% due to short holding period.

Note: Unhedged position results provided in the charts below were calculated assuming that the trade will be closed on the same day as the exchanged shares are received. However, we also checked if different exit dates make a difference (see “Timing Unhedged Position Exit” section below).

Returns of the individual cases for each strategy:

Table below indicates the difference between unhedged and hedged (with positions opened right after announcements) strategies for the individual cases:

The difference between strategies is even more pronounced if returns are calculated in dollar terms rather than percentages. Unhedged strategies result in 2x higher average returns compared to the hedged ones.

Total returns if one would’ve participated in all 16 split-off transactions (with odd-lot positions):

For the unhedged strategies the numbers above were calculated assuming the position gets closed on the same day when the new shares hit brokerage accounts. We also considered strategies of holding on to these new shares for additional 1 or 2 weeks. The argument being that the share price of the subsidiary company is depressed during/after the transaction due to arbitrageurs and expected selling pressure from the 2x-5x increase in float (in some cases new shares make up 80% of total outstanding shares).

The chart below indicates average returns of different exit times for the Unhedged After Announcement strategy – the difference in returns is not that material neither on average nor for the individual cases, but closing right after receipt of new shares seems to be a better option even without considering the risks of keeping exposure open for another two weeks.

Number of Odd-Lot Shares and Proration