This idea was shared by Daniel

This is a potential merger arbitrage situation in New Zealand, therefore it is actionable only for those who have access to trading in New Zealand stocks (IB does not offer this possibility).

Bidder is attempting to claim a Material Adverse Change (“MAC”) to get out of acquiring Metlifecare (“MET”) at NZ$7.00 per share. This caused its price to fall ~40%, implying a 10-30% chance of the deal closing and creating the potential for upside of 52% if it does. Based on my review of the MAC clause within the Scheme Document, management’s public comments and the historic success rate of MAC clauses in allowing bidders to avoid a deal, I believe the market is overly discounting the probability of it closing. Combined with a cheap relative and absolute valuation of 0.6X NAV, MET looks like a compelling, asymmetric bet at current prices.

Initially, the stock traded at a tight 1.5% spread implying a ~95% probability of closing. However, in mid-March, as the Coronavirus-panic was increasing across the world, the merger-spread started to widen, with certain brokers speculating that APVG would try and get out of the deal. By the end of March, the speculation and panic had caused the share price to decline ~45% when finally, on the 8th of April, APVG formally gave notice to MET that they wish to terminate the Scheme.

Currently, MET trades at a spread of ~52% to the takeover price, below the pre-deal price and at ~0.6X book value/NAV – the second lowest multiple of its listed peers.

The market implied probability of the deal closing is somewhere around 13-34% (based on a downside price of $2.70-3.70). I think this is overly pessimistic given the Material Adverse Change clause within the Scheme Document clearly carves out a change in “General economic conditions” as a reason for APVG to pull out of the deal. This, combined with the generally low success rate Bidders have historically had in using MAC clauses to get out of deals, leads me to conclude that the “true probability” of the deal closing is more likely in excess of 50% – implying a very attractive Expected Return of 30%+ (if this bet could be repeated multiple times).

Finally, given where MET trades on an absolute basis and relative to its peer group, the situation looks highly asymmetric and has the characteristics of my favourite type of bet – “heads I win, tails I don’t lose much”. At 0.6X book value, MET trades at a material discount to all but one of its peers, and also its trailing 10-year average of ~0.9X.

Does AVPG have a reasonable case?

APVG’s main argument is that “Metlifecare has been and will be significantly impacted by COVID-19 triggering multiple termination rights for APVG under the Material Adverse Change.” The specific part of the clause they refer to is the potential for a reduction in NAV of >NZ$100m or the underlying net profit for the year FY20 (forecast) by more than 10%.

However, within the clause it states that it will only constitute a MAC if such an event is not the result of a change in ‘general economic conditions’ or a change in ‘law’… Management’s belief (which is based on legal advice) is that:

UBS has put together a good summary of both parties’ arguments:

It’s important to remember that we are not trying to gain certainty of what the outcome will be (as the future is unknowable). What we are trying to work out is the rough probability of each potential outcome, so that we can compare this to the odds we are being offered by the market and determine if we are being given an unfair bet.

Below is my summary of the key points regarding the Material Adverse Change clause within the Scheme document:

One of the biggest issues I usually have with merger arbitrage ideas is the inventory risk. i.e. I wouldn’t want to own the business in general, or the current price is substantially higher than what I would want to pay.

In the case of MET, it is a business that I think is “ok” and it is currently at a price that could be “attractive.” This makes the investment proposition more attractive, because a strong case can be made for the business currently being undervalued, meaning that in the scenario where the deal breaks, our downside could be relatively small, or even zero – making the situation highly asymmetric.

The company seems to be of decent quality, with a long track record of compounding book value plus dividends (per share) at around 10% p.a. 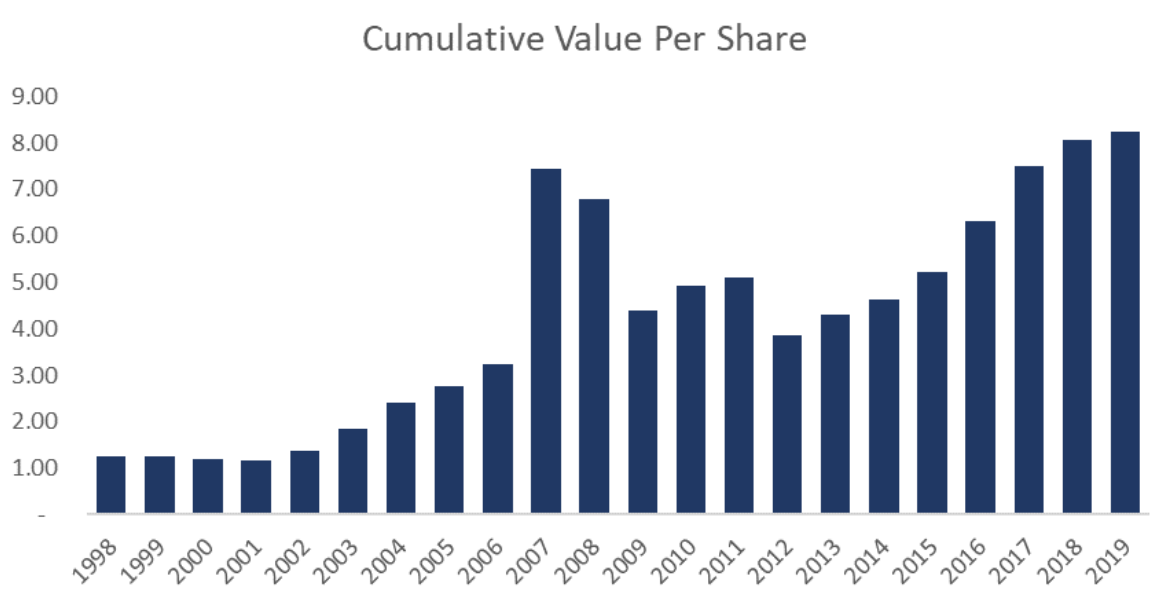 While a large part of this is driven by valuation changes – given the book value is predominantly determined by the Third-Party valuation of the Real Estate portfolio – the underlying assumptions behind the valuation do not look unreasonable: 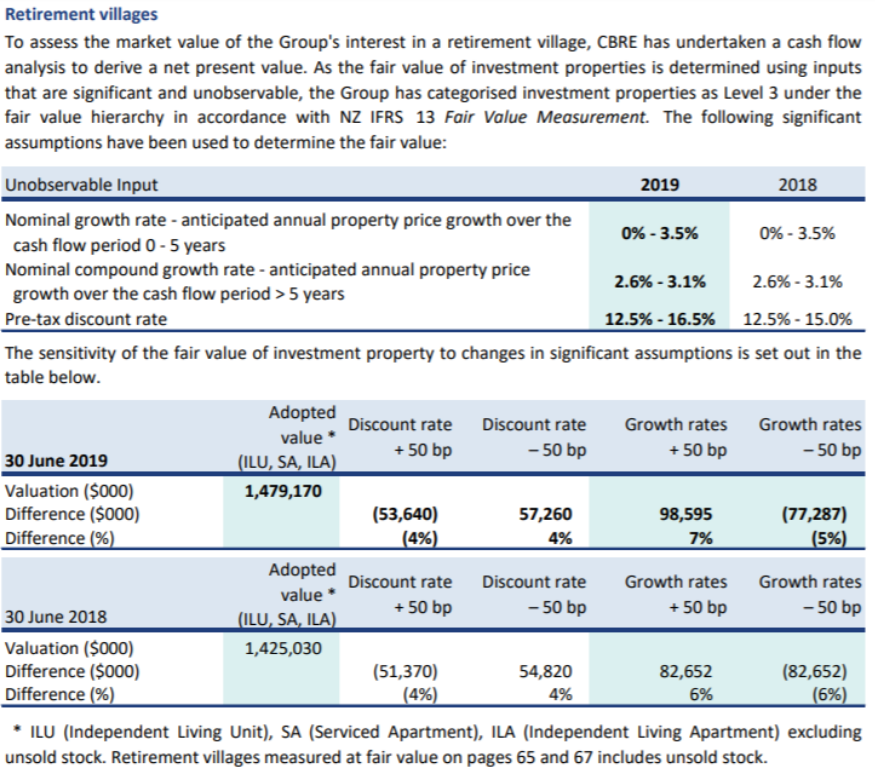 At NZ$4.20 the company is selling for 0.6X book value (NAV) which provides a further margin of safety.

Sanity checking the NAV by using the current underlying profits, it looks to be “reasonable” based on a back of the envelope calculation: CBRE valuation per share (book value): NZ$7.00 Current underlying operating profit (NOI): NZ$90m Per share: NZ$0.42 Implied cap rate: 6% These businesses are quite difficult to value accurately due to their opaque financial statements, however, at 0.6X book value and ~10X operating income, I think we can have some confidence that it is not wildly overvalued for a business that operates in an industry with growing demand (ageing population), limited supply and attractive economics (float).

It also gives me comfort that at 0.6X book value, it is trading at a substantial discount to both its all time (1.3X) and 10 year (0.9X) average P/BV multiples: 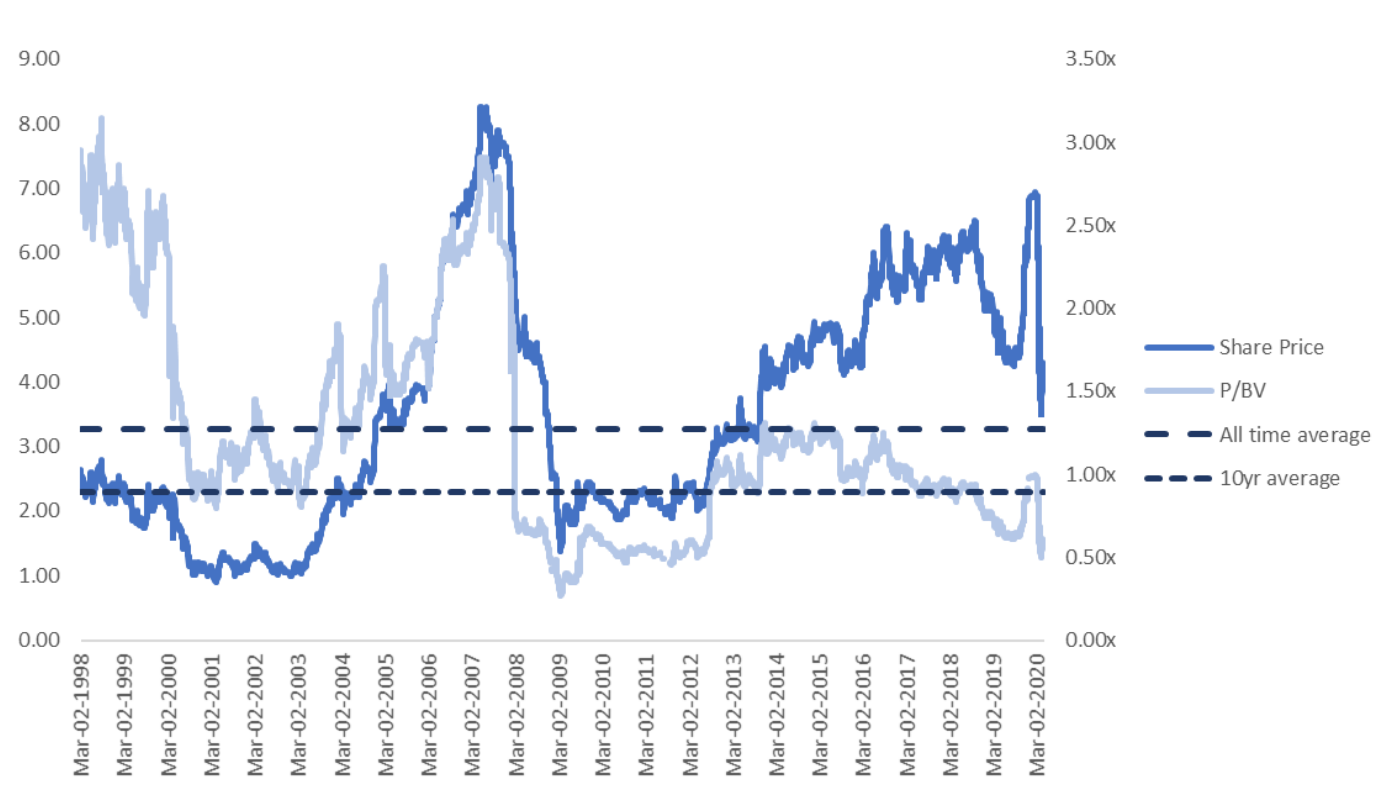 Is it a good bet?

The key to a good bet is having substantial positive expected value (and ideally, the ability to replay the bet multiple times). To calculate this, we need to consider the range of potential outcomes and their discrete likelihoods.

The first step of the probability tree is – deal or no deal? Given the infrequency with which MAC’s are used as the key reason for a deal being cancelled, this is obviously difficult to handicap using historical data. From my discussions with lawyers and after reviewing the MAC clause within the Scheme documents, I would guess the bidder’s best case of getting out of the deal is no better than a coin flip – 50/50. Importantly, for the Bidder to get out it has to be correct on two points:

The next step of the tree is, what happens in the event of a deal and what happens in the event of a break? The deal side is relatively simple as we can assume shareholders receive NZ$7.00 per share. The more difficult part is working out what we would expect to lose on our investment if the deal does not go ahead. This has two points of view: what is the business worth and/or where will the stock trade.

Valuation is part art, part science and it is impossible to narrow it down to a single point because:

So, while we can’t be sure what a business is worth, we can have an idea if it is in the bounds of “cheap, reasonable or expensive”.

As discussed above, relative to its own history it looks towards the cheaper end of the spectrum – 0.6X book value, vs long run averages closer to 1X. A 10X underlying profit multiple does not seem expensive either.

As for where the stock might trade, we can look to peers:

During the period in which MET has been “under offer” a lot has happened (Coronavirus in particular). Therefore, by looking at the share price moves and current multiples of its peer group, we can look at some potential ranges for where MET might trade if the deal breaks: 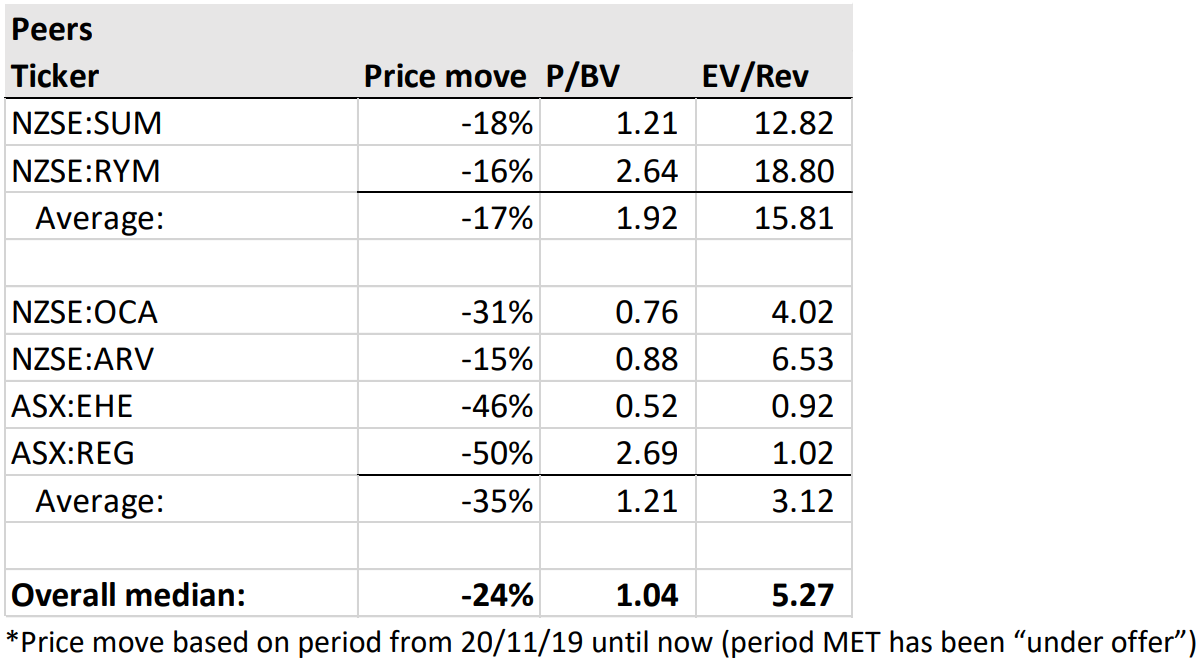 Applying these numbers to Metlifecare, we get the following:

Looking at the remaining data paints a pretty positive picture, with the worst price (based on the average price move of the second group) implying downside of ~20%.

It’s also worth mentioning the “market implied probabilities” of the deal closing, which we can calculate based on the various break prices:

Therefore, the market is pricing in a very low chance that the deal occurs.

Using the estimates discussed above, we can now start putting together our probability tree to work out our expected value, based on the range of outcomes and their likelihoods: 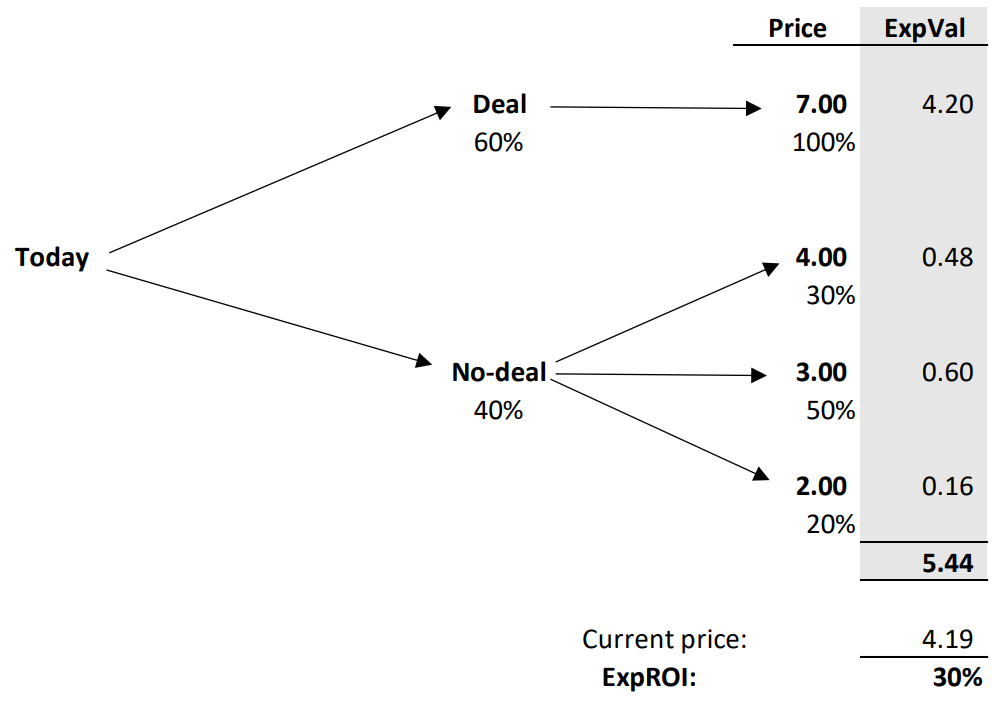 An Expected Return (“ExpROI”) of +30% is highly attractive, especially when one considers the reasonable probability of having zero downside – i.e. if one is not forced to sell on the day the deal breaks, it is possible it will head back towards fair value (>$4) in the following months.

I would imagine the Court case is likely to be lengthy, however, if early rulings were in the Company’s favour, I would expect the discount to narrow substantially. Therefore, our actual or achieved IRR could be substantially higher than our gross or expected return.

Why is it mispriced?

This is obviously a complex situation, with a lot of moving parts and a high degree of uncertainty. However, uncertainty does not equal risk. The key attraction in this arbitrage situation vs. many others is the potential for very limited downside – making it an extremely attractive, asymmetric bet.

Based on peer price performance and multiples, as well as compared to its historical trading range and fundamental value, there is a strong argument that MET is worth >NZ$4.00 per share. Therefore, by buying at current levels (~$4.20) we are risking $0.20 per share, for the chance to win $3.00 if the deal closes – 15:1 odds.

Even in a scenario where MET trades at a substantial discount to peers, at most we are risking $2.00 per share, for the chance to win $3.00 – which is a very attractive bet when one believes the chance of winning are >50%.