This month has been great for special situation ideas posted on SSI, with a number of closed cases delivering 30%+ returns and triple-digit IRR – see full list below.

Quite a few of these write-ups have been shared by members of our growing investor community.

The graph below details the individual MoM performance of all the active/closed cases (excluding Quick Ideas) during July. 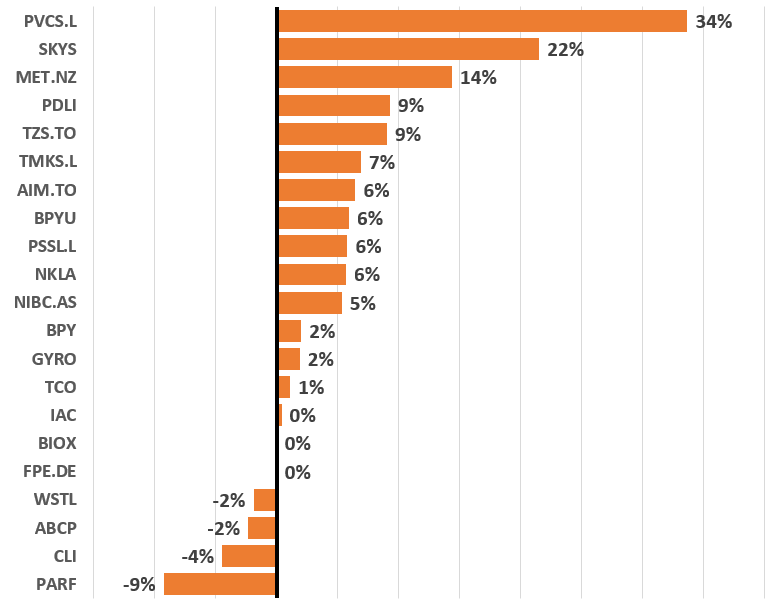 Sky Solar (SKYS) +100% In One Month
At a first glance, alternative energy firm Sky Solar seemed like a messy and repulsive situation (US-listed Chinese firm with fraudulent ex-CEO + pile of litigations), however, deeper research revealed that besides being backed by US VC firm, SKYS was also a target of several privatization proposals by non-Chinese parties. The most recent all-cash offer came from a Japanese led consortium, which then owned 72% of the company, whereas a certain SKYS debt holder Hudson Capital tabled a “considerably higher bid” (despite bombarding the company with litigations claiming insolvency). Eventually, the Japanese consortium terminated their proposal and filed a tender offer instead aiming to raise their stake from 77.5% to 90% and then move for a squeeze-out. On such news, most of the arbitrage spread was eliminated and the idea was closed with 100%+ return in 1 month. However, over the last week, the spread has widened again (currently at 19%) due to uncertainties regarding the previously agreed debt financing for the tender. The expiration date got adjourned by 4 weeks to the 28th of August.

Nikola (NKLAW) +36% In One Month
Capital structure arbitrage for a recently SPAC-listed Nikola Corporation. NKLA warrants were trading at a substantial ($30-$40/share) discount to NKLA common stock. Borrow was hardly available and extremely expensive (900%/year), however synthetic short through options offered an attractive arbitrage play. The trade had several risks with the main one being timelily SEC approval of new share registration statement, without which warrants could not be exercised into common stock. The consent from regulators got delayed by almost two weeks past the first exercise date, but the approval was eventually received and allowing to exchange warrants into common stock. This arbitrage resulted in a 36% profit in 1 month.

IAC (IAC) +70% (unhedged) & +30% (with MTCH hedge) in 3 Months
IAC announced an intention to split off its major asset – stake in March Group (MTCH). The spin-off was expected at the very minimum to eliminate the discount of IAC stock to its listed subs (MTCH and ANGI) and potentially even close the gap to IAC net asset value (listed subs + a number of other assets). The main caveats lied in potential delays, terms amendment, or outright cancellation of the split-off, however, continuous re-assurances from the company diminished these risks. Without any major hurdles, the transaction was closed successfully and in 3 months: unhedged trade resulted in +70% (partially due to market recovery from COVID), hedging only MTCH resulted in +30% (after borrow costs), while positions with both listed subs hedged returned a modest 5% profit (mainly due to 4x increase in ANGI price).

Metlifecare (MET.NZ) +28% In 1.5 Months
This was a merger arbitrage case in New Zealand – actionable only for those who had access to trading in New Zealand stocks. The bidder attempted to claim a Material Adverse Change to get out of acquiring Metlifecare at NZ$7.0/share, so MET price fell sharply (resulting in arbitrage spread of 52%). The market clearly saw limited chances of successful closure. Despite that, a review of the MAC clause within the Scheme Document, management’s public comments, and the historic success rate of merger terminations based on MAC indicated that the market was overly pessimistic in the case of Metlifecare. Therefore, combined with the cheap relative and absolute valuation of 0.7x NAV, MET looked like a compelling, asymmetric bet. Eventually, both companies have settled for a price reduction and the spread closed resulting in 28% arbitrage gains.

58.com (WUBA) +14% In 1.5 Months
Largest Chinese online classifieds company 58.com (WUBA) was subject to acquisition by a consortium of PE firms and Jinbo Yao (founder and CEO) at $55 per each ADR share. The main condition was consent from 2/3rds of the voting power. As the consortium owned 44% of voting shares, the whole play appeared to be focused on the decision of Tencent – second-largest shareholder with 26% voting power. Given the long-term ownership of Tencent in WUBA, it seemed reasonable to assume that buyer’s have already received its consent beforehand. Shortly, a definitive agreement was signed with at a slightly increased price ($56/ADR) and the spread closed. The trade resulted in 14% return over 1.5 months.

Forescout (FSCT) +18% In 2 Months
IoT cybersecurity company Forescout agreed to be acquired at $33/share in cash. However, after the COVID-19 outbreak, the buyer began citing material adverse effects with an intention to terminate/amend the transaction. Both parties went to court and as a result, the spread increased significantly (up to 60%). Nonetheless, after a few months of litigations, due to better than expected performance of FSCT and the buyer’s struggles to raise the debt, both companies have eventually settled for a price cut. The amendment is not small – the new offer stands at $29/share (vs. initial $33/share), however, due to a large initial spread at the time of the write-up, the idea still resulted in 18% profit in less than 2 months.

TearLab (TEAR) +15% In 2 Months
TearLab agreed to be acquired by health technology fund Accelmed Partners II for $0.0586/share in cash (total consideration amount was just ~$736k). Shareholder approval was already in the pocket and no further major hurdles were left outstanding. The buyer looked credible as well, so overall it seemed that this arbitrage opportunity existed simply due to the size of the company/transaction. As expected, the merger was closed in two months with a profit of 15%. Liquidity was limited, but certain investors (subscribers as well) managed to accumulate the positions.

TMK (TMKS.L) +9.5% In 3 Months
Parent of Russia’s O&G pipe producer TMK (65% ownership) announced a tender offer priced at 61RUB/share for all outstanding minority shares. After the second submission, the Central Bank of Russia approved the transaction and the tender offer commenced on the 19th of May at original terms. Interestingly, there were no minimum acceptance requirements, so the offeror was willing to accept any amount of tendered shares. Given the volatile O&G environment, cancellation of the offer/price reduction seemed to be the main risk here, however, TMK business proved to be quite resilient during previous oil downturns (2014-2015). The fact that the company proceeded with the offer and didn’t cut the price in the process diminished the risks as well. This arbitrage resulted in 9.5% gains with a currency hedge, while unhedged position returned 4% (due to ruble depreciation against the dollar).