The idea was shared by Colin.

This is a rather strange merger arbitrage case in the UK.

On the 25th of February UK lender Pollen Street Secured Lending announced a preliminary takeover offer from investment manager Waterfall Asset Management at £9.00/share in cash. The largest shareholder Invesco Limited (holds 25%) is supporting the transaction. According to UK law, the buyer was required to provide a definitive offer (“put up or shut up”) until the 24th of March, however, since then, this date has already been extended 5 times with the current deadline being the 14th of July. The reason for continuous extensions is an ongoing dispute between PSSL and its investment manager PSC which is tried to block the offer and failed to provide the information necessary for the buyer to perform due diligence. Therefore, PSSL has given PSC a 12 months termination notice and is currently looking for a new investment manager.

The most recent extension notice (16th of June), stated that the search is progressing well and that the decision on a new investment manager should be announced within a few weeks. However, it seems that PSSL is still having trouble receiving the required information, so the due diligence process has been stagnating for the past 5 months. The company states that it may be not possible to resume it until the new manager is appointed (12-month termination notice suggests PSC contract will expire only in Feb’21, so potentially another 7 months of waiting).

At this time the Board has been unable to make sufficient further progress in the provision of due diligence information requested by Waterfall, in particular due to confidentiality provisions with counterparties covering a proportion of the information requested. The Board will continue to seek to progress the due diligence process but is mindful that this may take some time and may not be possible prior to the appointment of a new investment manager.

Despite all of that, Waterfall stated that it supports PSSL’s search for a new manager, and remains committed to the merger (subject to the outcome of the pending due diligence). However, the risk remains that the buyer will walk away or that the final acquisition price will be lower given the likely impact on PSSL’s portfolio from COVID lockdowns. I would expect the price amendment to be proportional to change in NAV, which I conservatively model 14% lower. This still leaves room from the current share prices.

On a more positive note, if the offer doesn’t materialize, the company is likely to be put into run-off and liquidated.

Majority of the shareholders consulted (by both number and percentage of shares held) would like to see the Possible Offer brought to the table and otherwise are minded to support an orderly run-off of the Company’s assets and return of capital to shareholders.

Given this liquidation option, I would expect PSSL to trade at not more than 12% discount to NAV (where the trust was trading at the end of 2019) and the new post-COVID NAV to stand 14% lower relative to the current one (more details provided below). Taken this into account as a downside scenario results in share price of £7.1, which is not too far below from the current levels.

PSSL is an externally managed investment trust specialty lender investing in credit assets originated by non-bank lending platforms and other originators of specialist lending assets globally. The trust was listed in 2014 at £10.00/share and was previously known as P2P Global Investments (rebranded in 2019). Until 2017 (before PSC came into play), the company was poorly managed and overhyped on the P2P direct lending platform trend. In 2016, 70% of its portfolio was comprised of unsecured and poorly performing US customer loans. In 2017 the company announced a strategy shift and added more focus on higher quality, asset-backed, or structured loans to SMEs and real estate. The legacy portfolio has been largely run off and currently accounts for only 5% of the assets. More background on the “toxic history” can be found here. 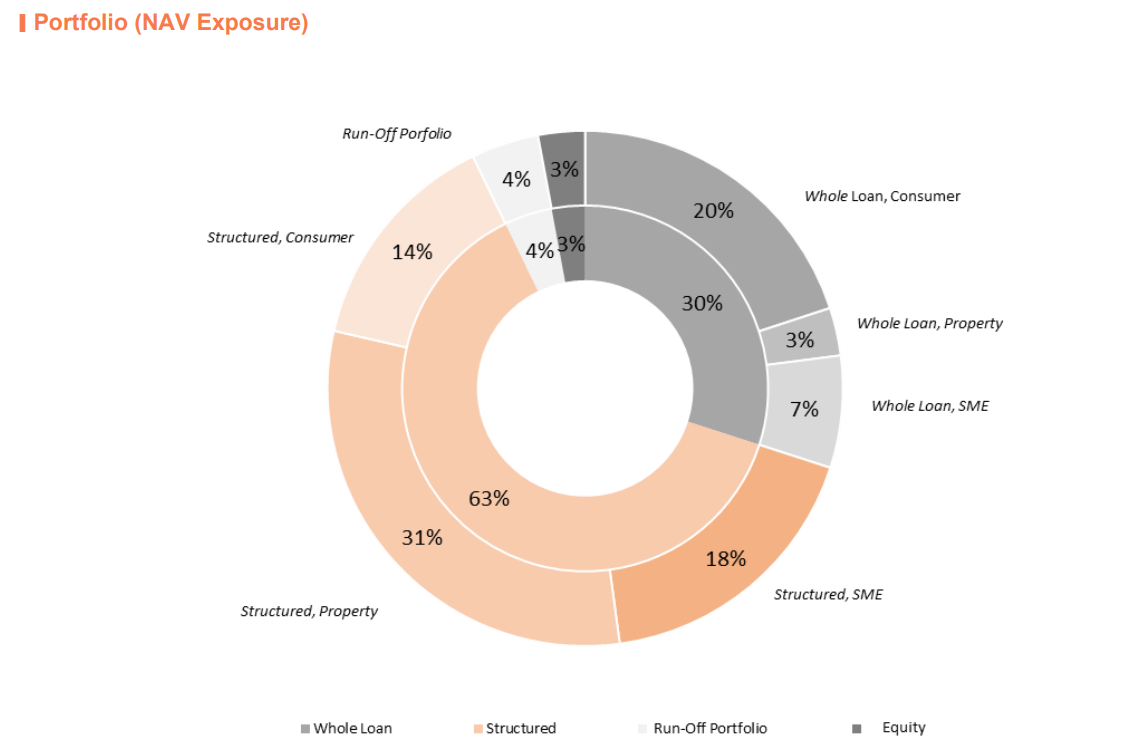 The majority of the PSSL portfolio (structured loans – 63%) is done in a partnership with the originator, while PSSL retains a senior capital position. Whole loans (1/3rd of the portfolio) are 100% owned by the trust. Overall, the portfolio is mainly focused on UK and US geographies with some exposure to other European and Australasian markets (details on geographical exposure are limited).

So PSSL is now focusing on:

Although the company doesn’t define a clear cut on the secured/unsecured portions of its portfolio it seems that the majority of loans are weakly protected. Aside from the structural protection (senior capital position), most of the loans are unsecured. Only the real estate part of the portfolio seems to be secured by collateral.

This elevated risk is also reflected in the yield of the provided loans – it ranges from 5% to 15%, while half of the portfolio yields 10%+.

Despite that, the annual credit impairments seem to be rather small (and consist predominantly of consumer and SME loans):

PSSL is employing limited leverage with net debt at 27% of the credit portfolio.

Despite exposure to SME and higher yield lending, PSSL claims that the COVID-19 effect has been limited so far:

Two of the company’s specialty lending peers Honeycomb (also managed by PSC) and VSL.L, both with fairly similar portfolios and lending profiles, also issued reports stating good performance of the lending books, minor write-offs and signs of recovery for SMEs due to governmental support. 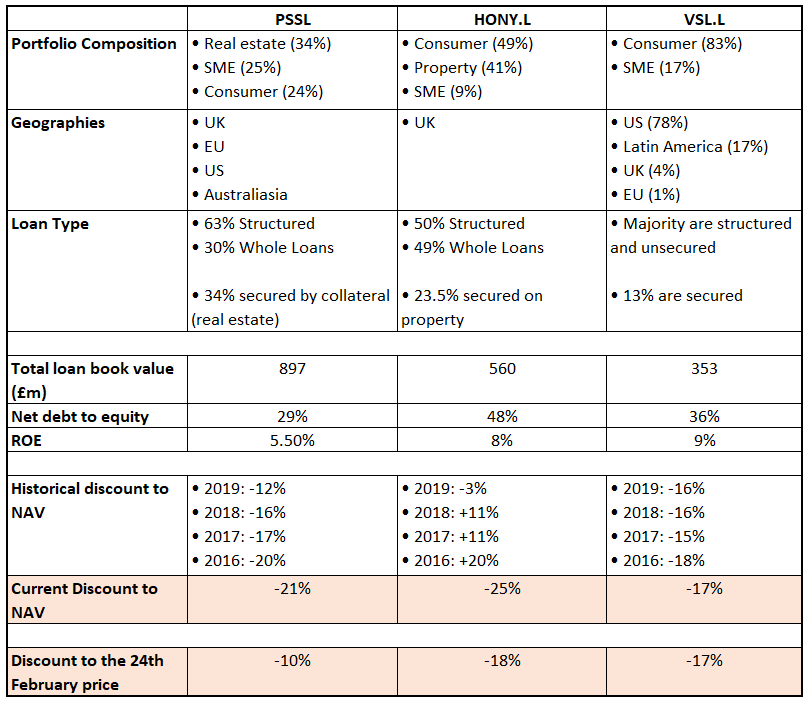 In case the merger fails, downside will be affected by two factors.

Putting this all together, in case the merger breaks I would expect PSSL’s NAV/share to stand at £8.1 post-COVID impact, and then 12% discount would imply £7.1 price per share.

This seems to suggest a limited downside from the current prices, however, keep in mind that my assumptions (especially on COVID impact) might be not conservative enough.

Also, there is a risk that PSC is reluctant to reveal information required by the buyer for a different reason than the wish to continue collecting ongoing investment management fees. The dispute between the board and PSC definitely raises some suspicions. Worst case scenario is some kind of fraud, but I do not think that it is likely.

PSC is an investment manager (£2.6bn AUM) that specializes in specialty lending and alongside PSSL manages HONY (since 2015).

The argument between the two companies was sparked after the offer from Waterfall was received on the 8th of January. PSC states that the required information for due diligence appeared to be unusually extensive for a public takeover (which signals high conditionality) and might have involved handing over confidential and sensitive information. Therefore, PSC tried to warn the board about this but was ignored. PSC also claims that some information that was requested doesn’t belong to PSSL (PSC investment papers).

PSSL, on the other hand, states multiple agreement breaches on behalf of PSC and claims that the manager failed to send the required information (the documents that were actually sent were largely redacted and irrelevant) and withheld files, which belong to PSSL including even the asset list of the company.

PSC then tried to urge PSSL shareholders to change board, however, in the most recent AGM (30th of June) shareholders voted for the current board to remain.

Potential liquidation of the trust

In the most recent monthly update for May’20, PSSL has stated that its consultations with largest shareholders have indicated that the majority of them (both in number and count) intend to support the offer and in case it doesn’t materialize, would like to see PSSL’s portfolio getting run-off and liquidated.

No final decision has been made yet, but if the company chooses the liquidation, the whole process will take a few years “due to the Group’s investments not comprising readily realizable securities”.

The buyer is experienced and knowledgeable in the specialty lending industry, while PSSL seems to fit its investment strategy well.

I haven’t been able to find many cases of other lender acquisitions/investments made by Waterfall except this £250m investment in Divvy (Jan’19).