Another great month for special situation ideas posted on SSI – a total of 9 cases have been closed in August and all of them with positive returns. See the full list below. At the moment we have

Quite a few of these investment situations have been shared by members of our growing investor community.

The graph below details the individual MoM performance of all the active/closed cases (excluding Quick Ideas) during August. 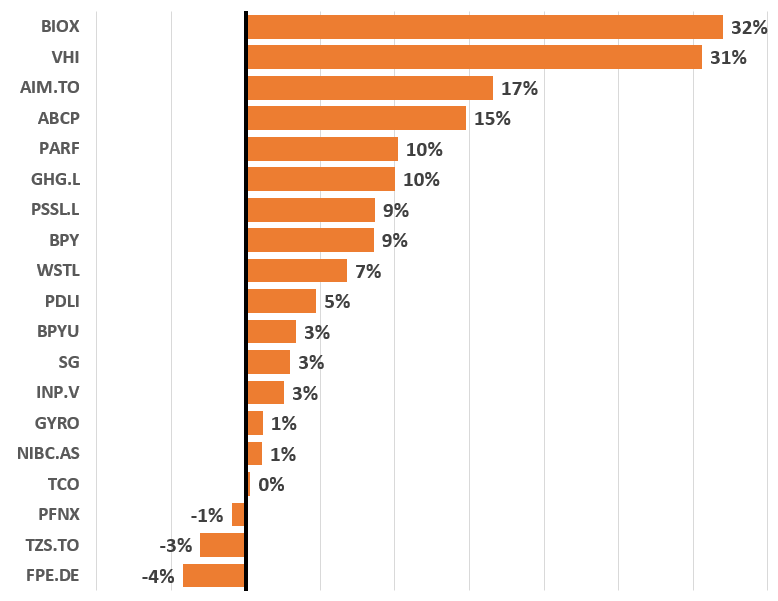 Craft Brew Alliance (BREW) +45% In Five Months
Brewing giant Anheuser-Busch was acquiring the remaining stake in craft brewing company Craft Brewing Alliance at $16.50/share in cash. The buyer already owned a 31% stake in BREW. Shareholder approval was secured and the only remaining hurdle was the antitrust consent. BREW shares used to trade close to the offer price, however, the spread exploded (to 50%+) after the COVID-19 induced market fall and delays in the antitrust decision. Even after certain divestitures have been agreed on in June, the regulatory decision was still pending. Recently, rumors started spreading that the merger will close shortly and the spread narrowed to 4.6%. This trade generated +45% in 5 months.

Bioceres Crop Solutions (BIOX) +32% In One Month
This was a rather unusual case as most often the spreads on warrant/common exchanges are close to zero. Bioceres Crop Solutions (BIOX) announced intention to eliminate all of its outstanding warrants and made an offer to exchange them into either $0.45/share in cash or 0.12 BIOX shares. All stock consideration provided with a 21% upside, while some borrow was available on IB (appeared/disappeared regularly). The minimum acceptance condition (50%) was very likely to be satisfied as certain warrant holders owning combined 48% of warrants agreed to tender. Overall, it seemed that the offer is very likely to go through. On the 24th of August, the warrants were exchanged successfully securing 32% profit for unhedged positions and 19% arbitrage gains for hedged positions in one month.

Brookfield Property REIT (BPYU) +$100 In One Month
Brookfield Property REIT launched a tender offer for 16.6% of its outstanding Class A shares at $12/share. Odd-lot accounts (99 shares and less) were to be accepted on a priority basis. As the BPYU price went up slightly above the offer price even prior to the expiration of the proposal, the idea was closed with $100 profit in one month. Eventually, the tender ended up slightly oversubscribed with proration standing at 81%.

Brookfield Property Partners (BPY) +10% In One Month
In parallel to the BPYU, Brookfield Property Partners has also launched a similar tender offer for 17% of outstanding units at $12/unit but without the odd-lot provision. Given the much larger size of the company (compared to BPYU) and the results of the last year’s tender offer (was significantly undersubscribed), it seemed that the chances of BPY offer ending up undersubscribed again are quite high. With BPY price also climbing slightly above the offer price, the idea was closed with a 10% return in one month. As expected, the offer itself ended up markedly undersubscribed (just half of the total limit was tendered).

Georgia Healthcare (GHG.L) + 10% In One Month
This was a merger arbitrage case in the UK with a virtually “risk-free” return. Georgia Healthcare was getting acquired by its parent Georgia Capital (owned 70% at the time) via a tender offer. Following the expiration of the tender the buyer reached 97.4% ownership and then immediately started the squeeze-out procedure for the remaining shareholders. Despite virtually no risks, the spread to squeeze-out consideration stood at 10%. This was likely due to lower stock liquidity as well as the admin burden required to claim the merger consideration (a bit more complicated than standard M&A). Squeeze out was completed on the 28th of August and the idea was closed with considerable IRR.

Pollen Street Secured Lending (PSSL.L) +15% In Two Months
Specialty lender Pollen Street Secured Lending received a preliminary takeover proposal (pre-COVID) from investment manager Waterfall Asset Management at £9.00/share in cash. The largest shareholder of PSSL (owned 25%) immediately showed support to the proposal. Nonetheless, a firm offer got delayed significantly due to the external manager of PSSL refusing to provide the necessary information for the due diligence process. This whole turmoil resulted in PSSL trading at 25% spread to the proposed merger consideration. With the buyer reassuring multiple times its commitment to the offer, the whole situation seemed more of a question “when” and not “if” a firm offer will be put on the table. Moreover, the downside was well protected by PSSL intentions to liquidate the company if the offer doesn’t go through (PSSL traded below NAV). Unexpectedly, in August PSSL appointed Waterfall (the prospective buyer) as its new external manager, which muddled up the situation and increased the likelihood that PSSL will go through lengthy liquidation instead of the swift takeover. Given a jump in the PSSL share price, the idea was closed with a 15% profit in two months.

Dundee Corporation (DC-PB.TO) +14% In One Month (C$242 for odd lots)
Dundee Corporation was buying 76%-88% of its Series 2 preferred stock at C$16-C$18.5/share. Shares were trading in the middle of the range at the time. However, given the size of the offer (76%-88%), the upper-level pricing seemed almost guaranteed. Actually, it turned out to be even better as, eventually, the company has decided to amend the terms of the proposal and buy all of the outstanding Series 2 preferred shares, while also upping the price to C$19.50/share + C$0.26/share in dividends. The expiration date is now set to the 8th of September, but shares are already trading above this new offer price. The idea was closed with a +14% profit in one month. There is a small chance that the offer price will be sweetened one more time.

Alt Resources (ARS.ASX) +5% In One Month
Alt Resources was subject to an all-cash takeover offer by Aurenne Group Holdings at A$0.0505/share. Conditions included regulatory approval (seemed to be not an issue) and a 90% minimum acceptance condition (quite common in Australia). Given the company’s dire situation and support from a number of shareholders and management, it seemed very likely the transaction would go through. Eventually, the buyer reached the 90% threshold and now will be able to squeeze out the remaining minority shareholders.

Guyana Goldfields (GUY.TO) +7% In Two Months
Guyana Goldfields, a small gold miner incorporated in Canada was getting acquired by a Chinese mining giant Zijin Mining at C$1.85/share in cash. Conditions included 2/3rds of shareholders’ approval and regulatory consents from China and Canada. Given the operational struggles and huge shareholder value deterioration of GUY over the last several years, it seemed fair to assume that most shareholders will be prone to cash out at 2.6x pre-COVID price. The regulatory risk was minor as well, so the existing spread was likely based on the negative sentiment towards China-related buyouts. Nonetheless, the buyer appeared to be credible and has already made one other (4x larger) acquisition in Canada this year. The merger closed as expected resulting in a 7% gain in two months.