M&A in the mining industry is always a bit of a black hole, especially when it comes to nano-cap exploration companies. So despite the sizeable spread and quick expected closing timeline, this idea is quite risky. On the other hand, similar transactions have closed successfully recently and major shareholder has already given its support here. On top of that, due to the small-capitalization of the companies, the spread is quite volatile and over the last 2 months since the announcement has fluctuated in the range of 5%-30%. So given the upcoming shareholder meeting (12th of August), the volatility might get elevated once again providing an opportunity to profit from the narrowing of the spread. 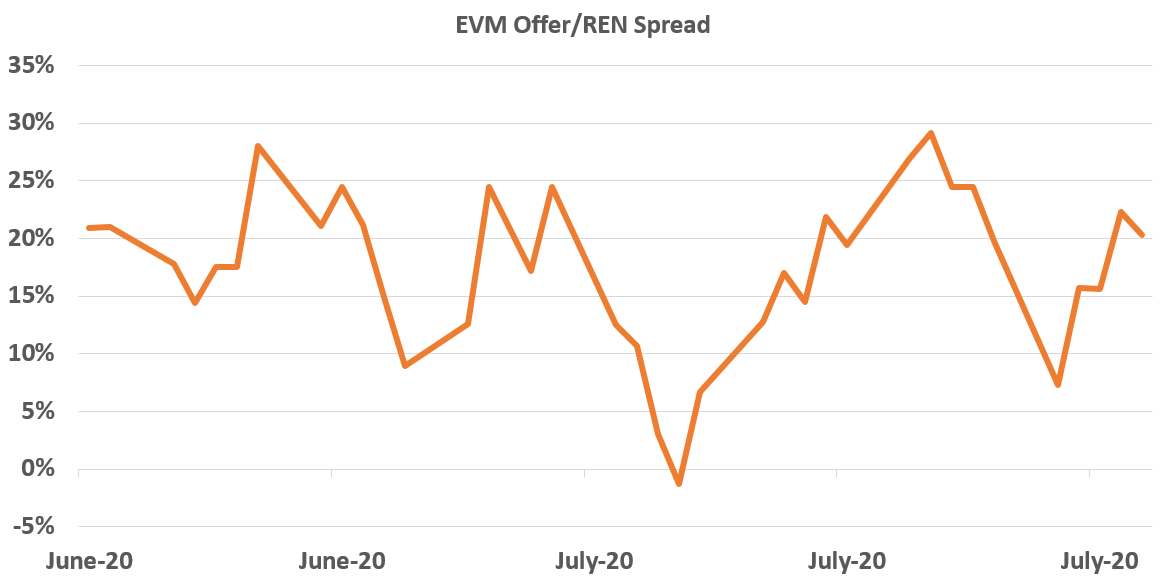 Renaissance Gold is subject to an acquisition by Evrim Resources (both companies trade with a market cap of C$40m). The offer was announced on the 10th of June, while the consideration stands at 1.2448 EVM per each REN share. The merger requires approval from 2/3rds of REN votes cast in a special meeting, which will be held on the 12th of August +  the support for the majority of EVM shareholders (meeting is set for the same date). REN already has over 23% of the vote in the pocket (directors – 10% and Altius Resources – 13.36%), whereas EVM side 21% of the votes already support the transaction (directors – 8% and Altius Resources – 13%).

Borrow on IB is available only for the USD nominated pink sheet listed EMRRF. The borrow fee stands below 1%/year.

Important to note that in case the deal breaks, the downside to pre-announcement price is substantial – 36%.

Both companies have the same business- to identify and secure exploration assets and then seek earn-in funding partners, who would acquire a stake in their assets by providing funds for the exploration. Eventually, REN and EVM would retain only a minor royalty stream (1-2% of net smelter return). Both companies combined currently have C$50m of exploration work being funded by partners.

The combined company will have multiple explorations assets with the most prominent being Ermitano Gold Project (Mexico) where EVM currently has 2% NSR (net smelter return) royalty and Silicon Gold – 1% NSR for REN. Nonetheless, all projects are still in extremely early stages, with Ermitano being the most advanced – pre-feasibility study is expected to be done in Q4, and production is planned to be started in 2021.

Among the expected synergies both parties include an increased capital market scale to transact on M&A level royalties, additional M&A opportunities, and C$804k G&A savings (for comparison, annual G&A spend currently is around C$2m/year for each).

So overall, the strategic implications for the merger here seem reasonable. There is nothing explicitly terrible that could be said about either company’s management (track record of fraud, etc.), therefore putting aside the general risk associated with the exploration mining companies, it seems likely that the merger should close.