This idea was shared by Maple Fun

This is a risky liquidation play with high uncertainty as some important parts of the eventual liquidation value cannot be estimated with accuracy.

Riviera Resources (OTC: RVRA) has been in a slow liquidation mode for the last 2 years. They recently made three announcements (here, here, and here) that they are selling the majority of the current assets (transactions to be closed in 2020 Q3 and Q4), while the remaining smallish assets are expected to be sold in Q4 (although no details are available on that so far). The company is majority-owned (64% combined) by a couple of PE/hedge fund shops – Eliott and Fir Tree and York Capital, which control the board and are pushing for the liquidation. The management has been paying big tax-advantaged distributions in the last 2 years and is fully committed to distributing the proceeds from recent asset sales in the quickest and most efficient way. My estimated liquidation value is approximately $2.2 per share, with the most part of it to be received in late 2020 and early 2021. The company has clearly stated that they will return the majority of proceeds to shareholders as soon as possible (PR):

The Company intends to evaluate the process of winding-up and of returning the majority of its remaining capital to its shareholders as efficiently as reasonably possible, at which point the Company would completely exit the upstream and midstream business, in the event this sale and other contemplated asset divestitures are completed.

The company has not made a formal call for liquidation of the company yet, however, given the involvement of the PE/hedge fund shops and the trajectory the company’s been taking over the last 2 years, it seems that RVRA should be liquidated shortly after the remaining assets get sold (expected in Q4).

Firstly the assets, which are currently on sale (the three agreements):

So all three sales already have the definitive agreements signed and the most important (largest) of them is Blue Mountain. Blue Mountain is getting acquired by Citizen Energy – a privately owned and newly created (2019) PE fund that in Q3’19 has acquired Roan Energy for $1bn. Given that Blue Mountain is a 10x smaller transaction, it is fair to assume that there should be no problems with financing, while the strategic reasoning (combining upstream and midstream assets in STACK/SCOOP areas) also seems legitimate. Overall, I assume that the probability of asset sales closing is very high.

After these 3 sales are completed, RVRA will retain only smallish mid-continent upstream properties, which the company is expecting to sell in Q4 (although no price or further details were given so far):

The Company has also previously announced plans to sell its remaining upstream assets, primarily located in the Mid-Continent region, with plans to close in the fourth quarter of 2020.

These Mid-Continent assets include “various other oil and natural gas producing properties and mineral acreage throughout Oklahoma”, however, due to consolidation, their value is not clearly defined in RVRA statements. Thus, to remain conservative, I have assumed zero value for these, however, any additional income from the sale will increase the potential liquidation value.

Estimated proceeds from the RVRA liquidation: 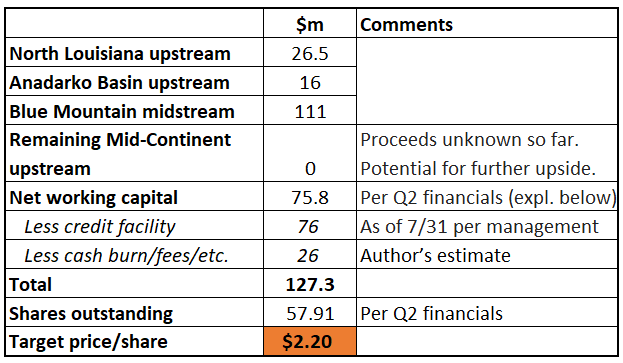 The most important wild card here is the Net Working Capital (NWC) as it is not clear how much of the indicated $76M (based Q2 numbers) will remain with the company following asset sales. If $20m of this figure gets transferred together with the asset sales, then the whole upside is eliminated. In the liquidation scenario above I have assumed the full amount stays of NWC with the company. Larger components of NWC:

Regarding the cash burn and other fees, I’ve modeled $6m for commissions/fees related to asset sales. That’s ~4% of the gross stated amount and is consistent with historical asset sales numbers. RVRA sold Hugoton Properties last year: $295M news release number, $283M net proceeds as shown on financials. That was 4% fees. They sold their office building this year for $21.4M, $21M shown on financials: 2% fees.

Furthermore, I have modeled an additional $20m of cash burn for running the business/cash leakage, liquidation expenses and etc. The number is arbitrary and speculative (another point of high uncertainty). Please note that during H1’20, with historically low energy prices, the company actually generated a positive $10M operating cash flow prior to changes in the net working capital. Moreover, RVRA shut its productions and cut personnel expenses in Q2 (a lot of severance pay already occurred), sold assets (so minimal capital expenditures in H2 and hereafter), and cut other expenses heavily.

The share price of Riviera has been very disappointing since its birth in 2018. Two reasons to explain: first, the overall U.S. shale industry has suffered a lot from low energy prices and bad economics of shale oil/gas. Second, Riviera’s midstream assets are in SCOOP and provide services to Roan Resources (acquired by Citizen Energy in Nov 2019). SCOOP has been hit extremely badly by low output and high decline.

Riviera Resources started selling assets and returning cash to shareholders from Day 1. However, worth noting that the share buybacks so far have been value destructive as shares were repurchased significantly above the liquidation value. Maybe at the time of buybacks management envision far higher liquidation value – hard to tell with limited communication.

Track records are as follows: