During September we have posted 11 new cases.

Yet another lucrative month for special situation ideas posted on SSI. A total of 11 cases have been closed with 10 of them ending up profitably. See the full list below.

Quite a few of these investment situations have been shared by members of our growing investor community.

The graph below details the individual MoM performance of all the active/closed cases (excluding Quick Ideas) during September. 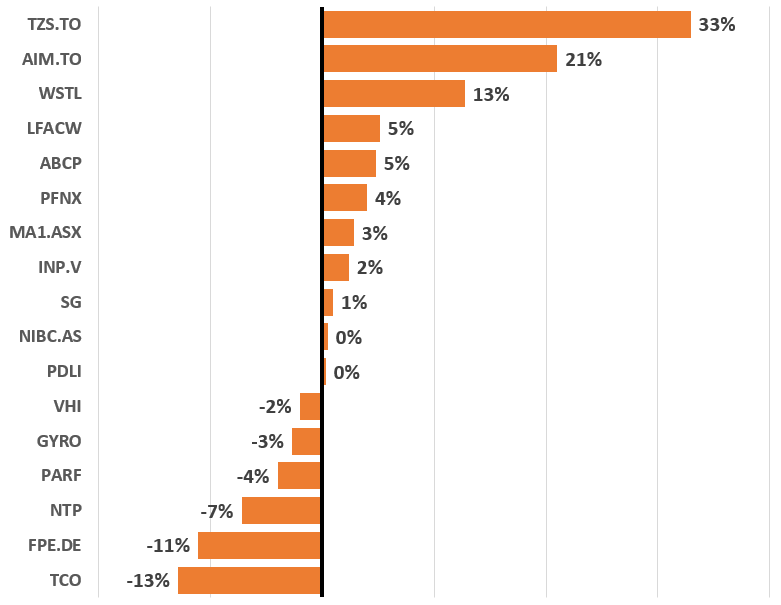 Marchex (MCHX) +23% In 1.5 Months
This was a “more-interesting-than-usual” tender offer. Analytics software services provider Marchex announced intentions to launch a joint and equal tender offer with its largest shareholder/activist Edenbrook Capital for 23% of outstanding shares. For quite some time activists have been pushing the company to improve it’s operational and share price performance and indicated valuation estimates at 2x-3x premium to current prices. Due to this the likelihood of the offer ending oversubscribed was low. Eventually, to entice shareholder participation the tender offer price was increased by 16%. And after the spread narrowed, the idea was closed with a 23% profit in 1.5 months. Given the strong interest from the activists, it might be worth keeping an eye on MCHX in the future.

Trez Capital Senior Mortgage (TZS.TO) +26% In Two Years
TZS was liquidating and traded at a significant discount to book value. Succesful recent liquidation of a sister company increased the likelihood of a similar outcome for TZS. Almost the whole lending portfolio had been sold-off already with only two mortgages remaining on the balance sheet. One of these was in default but had a very strong collateral support and a newly agreed repayment schedule. Although TZS was sitting on substantial amounts of cash, management was delaying distributions to shareholders with hardly any explanations. Two years later, after a couple of liquidating distributions, the spread to NAV closed resulting in a 26% gain during the holding period.

Nomad Foods (NOMD) +$100 In One Month
Dutch tender offer with an odd-lot provision for 11% of outstanding NOMD shares. The company has greatly benefited from the COVID-19 and management made very optimistic comments about future prospects. Directors with 14% ownership indicated they will not participate in the offer. Due to this, it seemed likely that the offer will end up undersubscribed and priced at the upper limit. As expected, all the tendered shares were accepted and pricing was set to the upper limit, resulting in $100 profit for odd-lots and 4% return for larger positions in one month.

Pfenex (PFNX) 120% Potential CVR Upside Pending
Ligand Pharmaceuticals was acquiring PFNX at $12 in cash + $2 CVR. The merger had a high likelihood to close, however with PFNX trading at a premium to the cash portion, the whole upside depended and still depends on CVR payout. The CVR is conditioned on getting therapeutic equivalence (TE) approval by the end of 2021 for Pfenex’s Teriparatide Injection drug (PF708) – supposedly equivalent to the market leader Forteo in treating osteoporosis. Available research data, comments from the management and FDA indicate a high likelihood of successful CVR payout. The merger has now been approved and will close in two days. We are removing this idea from active cases. Market valued CVR at $0.65 at the time of the write-up vs $0.9 currently. A further 120% apside remains on CVR investment in case it pays out successfully. Those not willing to hold non-transferable securities can still opt to exit the position today at a 3% gain.

InnerWorkings (INWK) +7.5% In Two Months
InnerWorkings was subject to an acquisition by privately held peer HH Global. Given the relatively low price, INWK shareholder vote appeared to be the main risk here. However, the strategic rationale of this merger (two complementary businesses) and support from Blackstone (financing) indicated high chances of approval. Eventually, shareholders gave their consent and the spread closed resulting in 7.5% profit in 2 months.

Carroll Bancorp (CROL) +12% In 6 Months
This was a tiny all-cash bank merger. Carroll Bancorp was subject to acquisition by Farmers and Merchants at $21.63/share. Shareholder approval seemed likely due favorable deal pricing and strategic sense. The consideration was subject to adjustments based on the CROL book value at the time of closing, however, historical BV showed a relatively stable pattern. Eventually, all conditions were satisfied and the merger closed generating 12% return in 6 months.

Northview Apartment REIT (NVU-UN.TO) +11% In 6 Months
Canadian REIT Northview Apartment was getting acquired by two large PE firms – Starlight Group (real estate investment) and Kingsett Capital (real estate investment/development). Consideration stood at C$36.25/unit in cash. NVU seemed to fit well within the existing Starlight portfolio, while the regulatory consent was unlikely to be an issue. Regulatory and shareholders’ consents were received promptly, however, the approval of certain NVU lenders got delayed by several months. Recently, the closing date was finally set for the 2nd of November and the spread was eliminated.

Onevue Holdings (OVH.ASX) +3.5% In 2.5 Months
Australian fund registry Onevue Holdings was getting acquired by financial software provider Iress. A major OVH shareholder (17%) expressed concern with the price adequacy. However, the claims and comments of the ‘dissenting’ shareholder seemed quite strange and suggested that this was likely more a move to attract other potential bidders than an outright rejection of the offer. A few weeks prior to the shareholders’ vote the spread narrowed down materially, and given the remaining uncertainty, the idea was closed with a 3.5% return in 2.5 months.

NIBC Holding (NIBC.AS) +3% In 6 Months
This was a merger arbitrage case that saw its spread widen significantly during the COVID outbreak. Blackstone was acquiring Dutch bank NIBC Holdings and two major shareholders (with 75% ownership) had already agreed to sell their stakes. The main risk was Blackstone walking away due to COVID-driven markets’ turmoil. However, a number of reassurances indicated that the buyer remains committed. Spread stood at 37% at the time of the write-up with NIBC trading close to pre-announcement levels. Eventually, the market was proven correct and Blackstone started showing the intention to either wiggle out of the merger or reduce the price. Finally, both companies settled for a 24% price reduction and the merger is due to close shortly. Despite this material unfavourable development, the idea still resulted in a 3% gain.

PDL Biopharma (PDLI) +0% In 3 Months
Following the strategic review, PDLI announced liquidation and was targeting the dissolution by the end of 2020. A bunch of assets still had to be sold, while SOTP calculations indicated a 25% upside. Management owned 11% and seemed to be incentivized to run the process smoothly. However, several recent negative developments (royalty portfolio value deterioration and COVID impact on Lensar spin-off) significantly decreased the potential upside. Moreover, the liquidation timeline got extended till Q4’23. Given the prolonged timeline, uncertainty, and a rather thin remaining margin of safety (only 10% upside with the potential additional value from NOLs), we think the investment case is far less attractive and PDLI was removed from active ideas

Input Capital (INP.V) +5% In Two Weeks
Agricultural commodity streaming company Input Capital was getting acquired by Bridgeway National. Although 13% spread seemed attractive at the time the case was published, deeper due diligence by our members showed that the CEO/Chairman of the buyer has a history of multiple fraud stories and litigations and that the financing for the transaction is questionable and uncertain. Due to increased risks, INP was also removed from the active ideas.