Charles & Colvard is a moissanite (cheaper diamond alternative) jeweler and a rather well-known company among microcap investors. For quite a while now the company was positioned as a potential growth stock that’s just on the verge of a breakthrough. Unfortunately, the breakthrough did not happen and the stock is at its multi-year lows. However, several recent developments indicate that the company could become a potential acquisition target soon. In May (the mid of covid turmoil) CTHR has received one opportunistic offer that was rejected by the board, while an activist/largest shareholder with a 9.8% stake is arguing that in the private market the company would be worth $2.06 – $3.01/share.

While the upside might be exaggerated (the company has not traded above $2/share since 2015, except for a short spike in 2019), the downside seems to be limited and the company appears really cheap if profitability returns to pre-covid levels.

CTHR price is already at its multi-year lows and trades at 0.62x to book value (vs 0.88x average in 4 pre-COVID quarters), which is mostly cash and inventory. Debt is negligible (<$1m), net cash stands at $0.51/share (58% of the current market cap). Inventory (moissanite gems and jewelry) is the major asset marked at $1.04/share on the balance sheet and even in the worst-case scenario should be worth something. Overall, the book value seems to be backed up rather firmly here.

The company earned $0.1/share during fiscal 2019 (ending Jun’19) and another $0.04/share during the first half of 2020 before COVID hit. This was a significant positive change compared to losses reported during the previous years and it was mostly driven by a strong improvement in gross margins. And while it is not clear whether these profitability levels will return in post-covid environment, the fact that 60% of company sales are through online channels where sales held up pretty well inspires some confidence. CTHR is currently trading at 9x pre-covid PE.

I won’t attempt to try modeling/estimating the value of the company based on future performance as so far none of the previously made forecasts have worked out. Substantial uncertainty remains whether moissanite can increase in popularity, especially with the COVID-19 impact, one can only guess how it will turn out going forward. However, the main idea here is that given the recent events and the multi-year low share price, the downside here is well-protected, while further events with activism/sale process could result in a material upside. 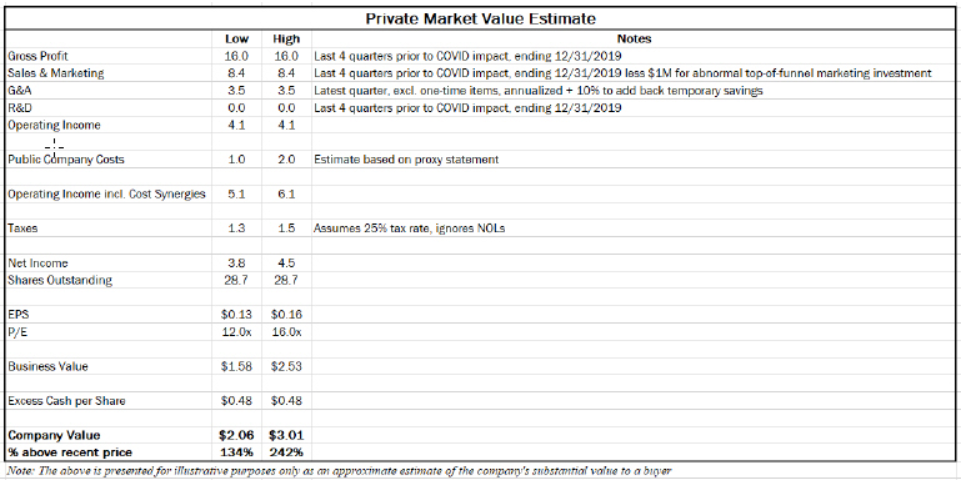 This valuation is pushed to the upside as the activist uses pre-COVID numbers, excludes some ‘one-time’ G&A items and public company costs. It is not clear how soon will the business recover and whether the financial performance of 2019 is a good reference point to start. 60% of company sales are through online channels and that part of business held up pretty well during the spring lock-downs (-8% in fiscal Q1 and -18% YoY in fiscal Q2, likely far fewer engagements/weddings during lock-down). However, the ‘Traditional’ segment saw a drastic decline in revenues (-29% and -32% YoY for the same quarters). Combined sales for the fiscal Q2 (June) were 41% lower YoY.

Charles & Colvard makes jewelry out of moissanite, which essentially is an affordable diamond alternative at 10% of the price. It scores a bit weaker on the hardness scale (9.25 vs 10) but has  higher shininess than the diamond (Brilliance Refractive Index (BRI) is 2.65-2.69 vs diamond at 2.42). The company doesn’t own any patents to moissanite development (most expired in 2015-2016, and competitors started entering the market), however, it claims that it has the best technology which results in much clearer and brighter products compared to peers. It sells loose jewelry (loose moissanite jewels) and finished jewelry (earrings, engagement rings, pendants, etc.) through two operating segments: online (60% revenues) and traditional retail points in stores, etc. (40% revenues). More background on the company can be found here and here.

The company is operating since 1995 and in that time had its ups and downs in terms of financial performance as well as share price fluctuations. In mid-2019 investors got excited when after many years of losses CTHR reported 6 profitable quarters in a row (Sep’18-Dec-19). Moreover, in the middle of 2019, the company has raised $9m in cash with the intention of significantly increasing its marketing efforts (market awareness is considered to be one of the main weaknesses of the company). The management has claimed that their ROIC on marketing is between 2x-8x, so investors strongly elevated their hopes for fiscal Q2’20 (Dec’19) results, which is also the strongest quarter (holidays) of the company. Eventually, it appeared that hopes were exaggerated and fiscal Q2’20 revenue growth was much worse than expected, whereas OPEX increased by 22%. Therefore, even pre-COVID (end of Jan), CTHR shares declined from $1.51/share to the current levels of $1/share. Although the results, weren’t great, the market might have actually overreacted a bit as the revenue growth was pressed down by the declining loose jewelry sales (40% revenues), which were down 14%. Meanwhile, the marketing efforts were actually targeting the finished jewelry, for which the sales have increased by 24%. Thus the efficiency of the increased marketing expenses was actually not as bad as the optics suggested.

Subsequently, the COVID-19 hit the company hard as it’s traditional retail points were closed, while the overall demand for moissanite went down as well: fiscal Q3 (Mar) revenue was down 18% YoY, while in Q4 it fell 42% YoY. Despite that, the management stated continuing focus on growth and expansion, while also looking for acquisition opportunities:

We intend to define and develop a strategic acquisition growth plan that will create sustainable long-term value for our shareholders. We plan to expand on our omnichannel reach by securing additional retail partners, giving our customers additional opportunities to experience our products firsthand.