October was a busy and intense month. 11 fresh ideas were posted on SSI and 10 cases were closed during the month (see full list below). At the moment we have 25 active and actionable ideas.

Teaser idea – we have recently published an interesting capital structure arbitrage opportunity. 36% spread is outstanding and borrow is available on IB. The expiration date is set for the 20th of November, so the timeline is quite short. Management seems highly incentivized to proceed and has recently waived all shareholder approval and financing-related conditions.

The graph below details the individual MoM performance of all the active/closed cases (excluding Quick Ideas) during October. 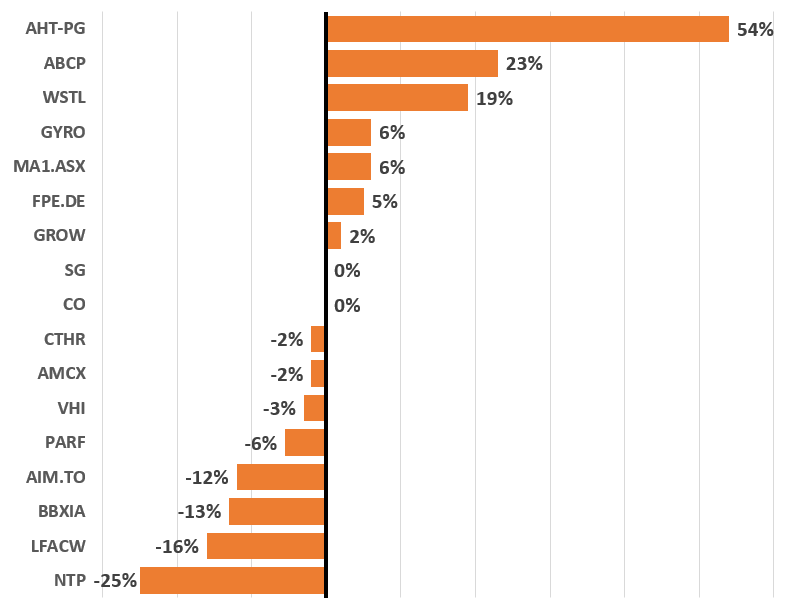 Acorn International (ATV) +49% In 1.5 Months
US-listed Chinese marketing firm Acorn International received a non-binding privatization offer from its co-founder and chairman Robert Roche. Consideration stood at $15.22/share in cash. Given the buyer’s position and share ownership (75% of ATV) approvals from special committee and shareholders seemed guaranteed. The financing agreement was already signed as well. The outstanding spread was likely a combination of an overall negative sentiment for Chinese companies and the fact that previous Mr. Roche’s proposal was canceled earlier this year. However, the suspension was done for seemingly legitimate reasons (COVID outbreak), so the new offer and lower price indicated low chances of another termination. Eventually, ATV signed a definitive agreement with the offer price raised by 38%. After the announcement spread was eliminated and the idea closed with a 49% gain in 1.5 months.

Monash Absolute Investment (MA1.ASX) +9% in 1 Month
MA1 is an Australian-based microcap managed fund with a majority of its portfolio in listed securities. It was trading at a ~10% discount to NAV and the company was trying to close this gap by transforming into an exchange-traded managed fund (ETMF). The process had started conversion was due to happen in early 2021. In the meantime, the spread between MA1 share price and its post-tax NAV was eliminated and the idea was closed with a 9% gain over a month.

Central European Media Enterprises (CETV) +18% In 3 Months
This was a rather risky bet with multiple political and COVID-related caveats. The acquisition of CETV by PPF Group was getting prolonged by almost a year with virtually no updates from the buyer. Target’s business (ad revenues) has been hit by the COVID, so the major risk PPF terminating the merger. Shareholder approval and certain regulatory consents were already received. However, a nod from the EU watchdog remained outstanding and had a non zero chance of rejection due to PPF ties to China. Eventually, EU clearance was received and the spread was eliminated. The idea resulted in a +18% profit in 3 months.

Westell Technologies (WSTL) +$450 in 3 Months
Westell Technologies was carrying out a 1 for 1000 reverse/forward stock split in order to deregister from SEC. Fractional shareholders had to be cashed out at $1.48/share. There were a number of positive signs that this reverse-split will not get canceled/amended as has happed in a number of cases before. Management owned a significant stake (26%) and the whole purpose of the transaction seemed to be buying out minority shareholders cheaply rather than only to save on the public listing costs. Eventually, the transaction closed as expected and fractional holders (999 shares or less) got cashed out generating a $450 return in 3 months.

Tiffany (TIF) +13% In 5 Months
Luxury jewelry retailer Tiffany was subject to acquisition by luxury goods giant LVMH for $135/share in cash. A few months into the COVID outbreak, rumors appeared that LVMH has concerns about the transaction. Eventually, both companies went to court and started firing claims at each other. Merger’s background and a kind of back and forth play style of LVMH indicated that the price amendment is more likely than the termination. Rather fast post-COVID recovery of TIF business supported this as well. A few months before the trial both companies settled for a price cut – $131.50/share, while additionally, TIF will pay out $0.58/share dividend to its shareholders. Spread to the amended price got eliminated and the idea was closed with +13% in 5 months.

Delmarva Bancshares (DLMV) +8% In 4 Months
This was a merger between two similarly sized nano-cap banks located in Maryland. BV Financial was acquiring Delmarva Bancshares for $8.90/share in cash. Given the price premium to pre-COVID levels, shareholder approval seemed very likely. The buyer’s balance sheet appeared to be strong (no problems to raise funds), while recently made similar acquisitions indicated that BVFL won’t back down from DLMV acquisition either. The strategic rationale was sound and eventually, shareholders gave their consent. In time, the spread narrowed down below 1%, so the idea was closed with an 8% profit in 4 months.

Fitbit (FIT) +7% In 10 Months
Wearable band maker Fitbit agreed to be acquired by Google for $7.35/share in cash. Shareholder approval was easily received, however, the main risk was related to regulatory concerns due to a large amount of customer data being transferred to Google. Regulators in the US, Australia, and Japan have expressed worries regarding the merger, while the EU watchdog even launched an in-depth investigation (Japan is considering this too). The decision is expected to be announced by the 8th of January. Google has made two rounds of concessions to EU regulators and there are rumors that a favorable decision for the merger will be reached. The market has reacted positively to this, narrowing the spread considerably. As the remaining spread seemed not enough considering the outstanding regulatory risks and uncertain timeline, we’ve closed the idea with +7% profit in 10 months.

AMC Networks (AMCX) -2% in 2 Weeks
AMC Networks launched a tender offer with odd lot provision for 25% of outstanding class A shares at $22.50 – $26.50. Shares were trading at the lower part of the range. There was a good chance the offer would end up undersubscribed and priced at the upper limit. The tender range close to 52-week lows, while management (with 26% economic interest, and 5% class A ownership) was not participating in the offer. Moreover, despite issues facing most of the cable network industry, AMC was still generating substantial amounts of cash and appeared relatively cheap. However, unexpectedly the final tender price was only slightly above the lower limit, resulting in 2% loss within 2 weeks.

Nam Tai Property (NTP) -30% in 1.5 Months
Nam Tai Property was a mismanaged real estate developer in China (listed on NYSE) that traded at a substantial discount to its sum of the parts ($17-$27/share). An activist IsZo Capital was trying to oust the board, garnered the support of 40% of shareholders, and requested to set up a shareholders’ meeting. A few days later CEO resigned and it looked like activist’s efforts in replacing management might be successful. Unexpectedly, NTP issued 18.7m shares to it’s ‘parent’ Kaisa (5/8 board seats) at $9.15 in a private placement. This increased Kaisa’s ownership to almost 50% and made any efforts by IsZo Capital futile. NTP shares have sold-off sharply after the announcement and the idea was closed with a 30% loss.

Gilat Satellite Networks (GILT) -38% In 4.5 Months
Israeli satellite services networking communications equipment Gilat Satellite Networks has agreed to combine with its US peer Comtech. Financing was already secured and shareholder plus US regulatory approvals were received. Consent from Russian regulators got delayed for unknown reasons yet seemed unlikely to derail the transaction. The major risk was a negative impact of COVID on GILT business increasing the odds that CMTL will push for merger termination or term amendment. This risk materialized with CMTL filing a complaint about the disproportionate impact of COVID on a certain part of the GILT business. It seemed quite likely that both parties will settle for a price cut (CMTL did this with another recent acquisition), however after 3 months, both parties terminated the transaction. The idea resulted in a 38% loss in 4.5 months.