Update: The situation has improved since the write-up. See discussion below.

US Global Investors manages a number of mutual funds and two ETFs (gold and airlines). Earlier this year, the COVID-19 triggered the airline industry crash, which has subsequently attracted a lot of investors/speculators betting on a swift recovery. As a result, GROW managed airline ETF JETS saw its AUM increasing from less than $100m to $1.7bn. Investors likely expected that this increase in the AUM would be instantly reflected in the upcoming GROW financial results finally turning the company profitable. However, the recently released annual report (FY20, ending in June) left the market disappointed as it appeared that operating expenses were higher than anticipated, and operating profitability wasn’t reached. As a result, GROW fell by 40%.

I believe the market overreacted and is overly pessimistic:

By my count, with stabilized AUM and Opex, GROW operating income for FY21 will be around $4.0m-$4.5m which compares to a loss of $2.4m during FY20. At 10x multiple and a further $12m of non-operating assets on the balance sheet, I arrive at a value of $55m vs $38m market cap currently, indicating 45% upside to the current market cap.

Moreover, a substantial further upside is likely to be achieved when the airline industry starts recovering. Airline stock prices are still c. 40%-50% below their pre-covid levels and not too far from the March lows. AUM would increase together with the improvement in the airline share prices driving additional fee revenues. It is not too difficult to envisage an optimistic scenario where AUM would double from the current levels if we see a full recovery of the industry. A free option on top of already discounted valuation.

There are 3 main risks here:

For more details and further background, you can also refer to this VIC article written in June – currently GROW trades just slightly above the levels at the time of that write-up.

US Global Investors provides investment management services to 9 small mutual funds, together called USGIF (natural resources, precious metals, minerals, China region, emerging European markets, etc.). Until recently, this was their main revenue source. Primarily due to shareholder redemptions, in 2016/2017/2018 USGIF faced significant AUM deterioration ($700m to $450), however, during the last 2 years the company has managed to stay consistently above the $400m mark. GROW charges a base management fee of 0.76% – 0.97% for its mutual funds and a performance fee (only for equity funds).

GROW also manages 2 ETFs: US Global Go GOLD (GOAU), which focuses on precious metals, and US Global JETS (JETS) – with portfolio. The expense ratio for both ETFs is 0.60%.

During the fiscal Q3’20 conference call (in May, when JETS AUM was expanding) management clarified on the delay between AUM growth and the effect on the financial results and hinted on the supposedly positive quarter ending Sep’20 (results have not been reported yet):

But since revenue is based on assets under management, operating revenues will increase. But these will be offset by increased business development costs related to the ETF creation. Consequently, there is a delay in when the increase in AUM is notable in net income. And this delay can be a few months. Therefore, we would expect that the net positive result of the recent increases in JETS will probably fully be represented in net income after a few months, which is going to most likely be in a quarter ending September 2020.

During the latest call (fiscal Q4’20) management added that there are certain one-off expenses related to new unit creation when the ETF is growing and also some variable costs directly related to the size of AUM.

But the – as far as where JETS AUM comes in, that really hit our revenue line item. And so we saw a significant increase in our revenue in the quarter ending June 30. Now, how it works for us is that, we do get those 60 bps that Frank had talked about earlier, but we also pay all of the expenses related to the ETF.

So with that, some of the expenses are based on AUM and will increase as AUM increases, plus we have some distribution costs that are related to inflows. And as you know, we had significant inflows during that quarter. So that did increase our expenses. But some of those distribution costs are like one-time costs, so we were seeing that.

The table below shows the projected financial performance for the next fiscal year (ending Jun’21) assuming the current level of ETF AUM remains unchanged. The key points: 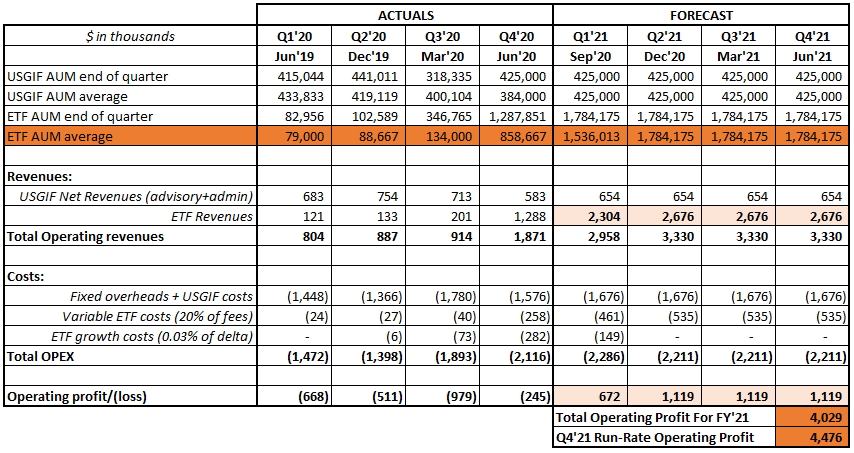 Aside from the operating business, GROW also has on the balance sheet:

The company also has about $9m of NOLs. These undoubtedly are worth something, especially when the company is going to turn profitable, however, I haven’t included in the SoTP valuation.

The combined valuation of operating businesses (at status quo, without further AUM growth) and non-operating assets results in GROW value of $3.5 – $3.8/per share. 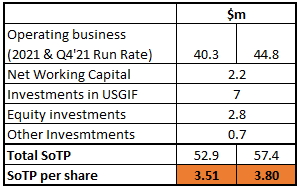