This idea was shared by one of our members, however, we think that a 9% upside looks a bit frail given the uncertainty regarding the intentions of the largest shareholder that owns a blocking stake (25%).

This is a pending merger in the Australian K12 online education sector, which involves several interested parties. 3PL had two takeover proposals – one from IXL Learning at A$1.35/share and another one from Indian ed-tech giant BYJU’s at A$1.50/share. IXL Learning proposal has already been rejected and voted down by the largest 3PL shareholder Viburnum Funds (recently acquired a blocking stake of 25%), while BYJU’s is still conducting the due diligence. Viburnum hasn’t officially rejected the A$1.50/share offer yet, however, it stated that a better alternative path for 3PL is to merge it with Viburnum’s subsidiary Blake eLearning (private).

The presence of Viburnum Funds adds a lot of uncertainty as on paper it can just keep blocking any further offers. Blake eLearning has been a customer of 3PL for quite a while with 3PL selling certain Blake’s educational products on its platform. 1/3rd of Blake’s revenues come from 3PL. Viburnum seems to be more incentivized to keep Blake / 3PL partnership as it is rather than risk losing 1/3rd of revenues under the new ownership of 3PL. So it seems fair to assume that it won’t give away the control of 3PL unless Blake eLearning is acquired as well. There is a chance all parties will find some kind of path forward, but uncertainty is high.

On the other hand, BYJU’s offer’s price doesn’t seem expensive when compared to a similar public peer and has some room for improvement. The buyer itself is well funded, has made multiple acquisitions recently, and is looking to expand in AU (3PL fits well into its portfolio).

The downside is difficult to estimate. Pre-announcement price is at A$1.09/share. However, the initial offer from IXL Learning was back in August and since then, 3PL reported non-inspiring annual results – growth still remains flat since 2018. Tailwinds from COVID-19 and a newly signed contract are expected to break the ice during FY21 (ending Jun’21) and return the company to growth. This, as well as the considerably increased interest in 3PL from the market, indicates that 3PL won’t fall back to August levels.

Aside from its proprietary products, 3PL has distribution rights to products owned by Blake Elearning (reading, math, and other products).

The company was taken public by Macquarie and Insight Venture Partners in 2014 at A$2.50/share (fully subscribed). Both exited their stakes shortly after the IPO. The offering was done at 19.6x FY15 EBITDA. Initially, the company has slightly outperformed its FY15 guidance, however, since H1’FY16 started rolling downwards due to lower than expected sales and profitability growth (competition, pricing pressure issues, etc.). Since the end of FY16, the company has started a 3-year restructuring process, changed its CEO and CIO, and refocused on math and literacy products. However, no significant improvements in performance were made and since 2018 the company keeps reporting flat revenues.

In June’20 the company announced a contract with a Ministry of Education of a certain Middle East country for providing online math education products. The contract is expected to bring A$13.61m (US10m) revenues in FY21. The agreement is made for a period of 12 months with a possibility to renew. In the annual report, the company states that:

This contract could expand to a whole of country opportunity and will serve as a lighthouse account for other countries in that region which represents significant new TAM for 3P.

So in FY21, significant growth is expected – Morgan Stanley estimates  3PL revenues at A$72m and EBITDA at A$27m.

BYJU’s offer comes at 12.5x FY20 EBITDA (ending Jun’20), compared to its peer (KME) valuation of 13.7x FY EBITDA. FY20 3PL margins were suppressed (27% vs 33% in FY19) due to increased expenses related to staff hiring because of the increased demand (pandemic and school closures). Taking this into consideration and accounting for the control premium, BYJU’s offer seems to have some room for improvement here.

12.5x EBITDA also seems inexpensive compared to the 3PL IPO multiple of 19.6x in 2014. Since then the company has grown its revenues from A$36.5m to A$55m (FY20), but EBITDA was hardly changed (from A$13m to A$14.6m). Of course, at the time of the IPO the company showed much better growth prospects (vs zero growth over the last 3 years) and had higher margins (35.5% vs 27% currently). Due to expected COVID tailwinds and impact from the Ministry deal the growth and margin improvement should come back once again (FY21 EBITDA margin is expected to be 31%).

On the 20th of Nov, Viburnum made a proposal for 3PL to acquire Blake eLearning. Viburnum values Blake at $188m and sees the consideration in 90% 3PL stock (issued at A$1.35/share) and 10% in cash. The acquisition would almost double 3PL share-count and dilute existing shareholders.

Visually this comparison of FY21 performance makes Blake look quite expensive, however, it should be noted that over the last 3 years its “revenue has grown at close to 30% per annum”, compared to the flat revenues of 3PL. Moreover, at this point, it is also unknown if the Ministry contract of 3PL is going to be renewed or it is just a one-off (expected to add A$13.6m revenues in FY21).

Viburnum states that the combined company would have a much larger market cap and would immediately get re-rated. Viburnum expects the share price of the combined company to be in the range of A$2.69/share to A$3.22/share. For these calculations, it uses 14x EBITDA multiple (of SaaS peers), which seems justifiable given the peer example above.

Viburnum Funds is an investment manager of the Australian public and private equities. Known to take activist ownership positions.

BYJU’s is one of the most successful ed-tech startups in the world and the second-largest startup in India. Recently it completed another funding round of US$200m, lifting its valuation to US$12bn (previous round of US$500m earlier this year valued the firm at US$11bn). The company made 6 acquisitions so far – the biggest one is the recent WhiteHat Jr takeover for US$300m in August. In September it bought LabInApp – science-lab-like simulation on mobile devices for an undisclosed amount.

In September BYJU’s CEO stated that they are continuing to look for more acquisitions and intend to expand to the UK, US, and Australia (here and here):

You will hear of a few more acquisitions from us. We are exploring some of them very seriously. […] Most of the recent fundraising is to finance inorganic growth, like full-cash acquisitions. We are utilizing it to add some strong business models. We never raised money because we needed it. It was always to add the right partner.

The company is mostly targeting niche business with play-based products for Children. Overall it seems that both 3PL and Blake would fit very will into its portfolio:
Some of BYJU’s acquisitions: 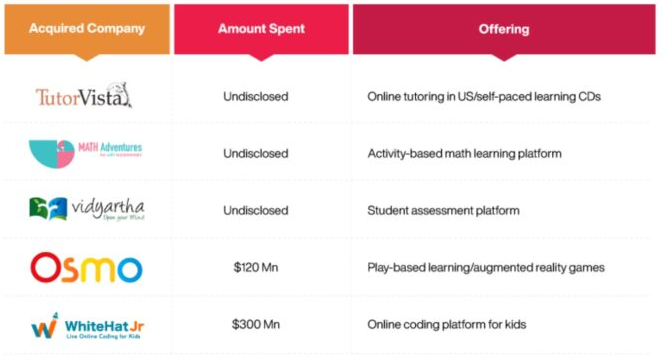