This is a fresh merger arbitrage case in UK. On the 9th of November Countrywide, one of the largest RE agencies in the country, has received a preliminary offer at £2.50/share in cash from its peer Connells Group (private). A firm offer is subject to due diligence and board approval. The deadline is set for the 7th of December (put up or shut up). Approval from 75% of the total votes cast will be required.

Uncertainty regarding the firm offer (and potential price amendments) remains and the situation is still largely speculative. Despite that, there are a couple of points that hint at potentially favorable developments for this case:

The main risks are offer termination (28% downside) or adjustment the merger consideration.

Countrywide believes that, in the absence of a recapitalisation, Countrywide is unlikely to be able to execute its business strategy over the short and medium term and there is a risk that it could end up in administration, with Countrywide shareholders losing all or a substantial portion of their investment.

CWD comparison with LSL Property Securities (a similar real estate agency) is supportive of this statement in the activist letter:

The decline in Countrywide’s financial performance over the past four years has been disappointing. The Company’s competitors have outperformed on several key metrics and now command far higher valuations, despite generating lower revenues.

Additionally, the table includes the available information on Connells (annual results, interim results), which clearly shows superior performance of the buyer. Connels generates a substantially higher EBITDA margin and had zero debt as of 2019 (no information was provided regarding H1’20).

CWD is a full-service real estate agent group with over 700 branches in the UK.  It has 1 core segment:

And 3 non-core segments (called non-core by the activist):

CWD.L became public in 2013 (worth £750m at the time) and in 2016 the business entered a sharp downtrend – became unprofitable and started losing market share. CWD stock reflected these trends. 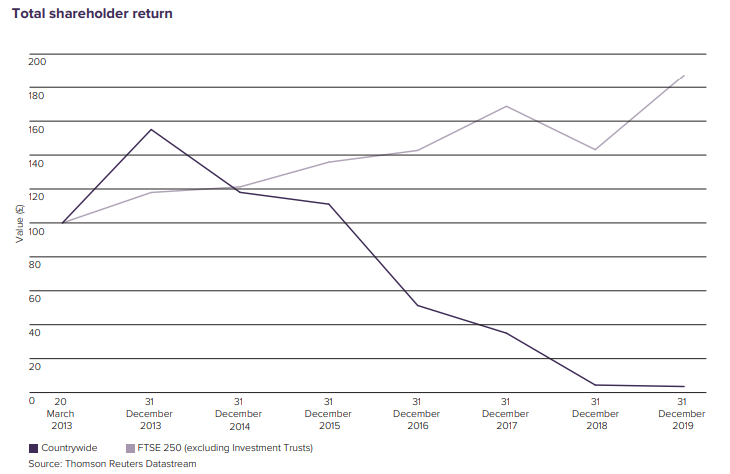 CWD is being pressured by the sluggish UK real estate market due to uncertainty regarding Brexit, problematic RE affordability (tax change-induced price increases), competition from cheaper online rivals, etc. In 2018 the company announced a turnaround plan that was supposed to re-focus on the core business (RE sales and lettings), improve the selling of complementary services (conveyancing, mortgages, insurance, etc.), and continue growing B2B and financial services business units. The results were somewhat positive in 2019 with adj. EBITDA up by 16%, sales and lettings segment returning to profitability, increased income from complementary services, and improved landlord retention rates. However, following the COVID-19 outbreak and lockdowns, H1’20 results showed a revenue decrease of 28% and adj. EBITDA falling 22% YoY. With Britain again in lock-down mode the same trends are expected to continue.

As of Q2 the company had already drawn all of its original revolving credit facility (RCF) of £125m and managed to secure an additional £20m super senior debt facility (matures in October 2021). Any additional debt raising is likely not an option. So far, due to COVID outbreak lenders have already agreed to waive debt covenants for March’20 and to amend the covenants going forward until Sept’21. The board forecasts that without additional liquidity CWD.L will breach Sept’21 covenants.

CWD is in the process of selling its failed commercial real estate business (Lambert Smith Hampton). The company had a buyer already (documents signed, shareholder approval received) that agreed to pay £38m for the division, however, at the last moment transaction failed. The company states that it is in talks with some other acquirers and still expects to sell it shortly, however, given the current market environment the chances of a swift sale are very low (no substantial updates were made in the last six months). Net proceeds (after transaction costs) are expected at around £20m (15% of EV, so still fairly significant, here and here). No details were provider on this, but understanding is that Connells’ offer already includes LSH division as well (they won’t need to wait for the sale to be completed).

CWD shareholders as of April’20:

Connels is one of UK’s largest high street real estate agencies and property service providers. Its services include sales and lettings, mortgage services, conveyancing, surveying, and more. The company operates over 500 branches and is a subsidiary of Skipton Building Society (mutual lending and savings organization with £25bn AUM).

Connells Previously made other real estate agency acquisitions, although significantly smaller than CWD.L:

Alchemy is an investment firm specializing in debt and equity special situations across Europe.