Dundee Corporation has announced another dutch tender offer with an odd-lot (99 shares) provision. This time the company intends to buyback 12%-14% of subordinate voting shares (class A) at prices of C$1.40 – C$1.60/share. The offer will be funded by cash on hand and will expire on the 11th of January. A certain director (Sinclair) holds 3.10% of class A shares and will tender all or a portion of his shares. Besides that, there is no information on the intentions of other shareholders. Polar Asset Management holds 17.45% of class A shares. Shares current trade at pre-announcement price.

Paid-up capital of the company is higher than the upper range of the offer, therefore both Canadian and non-Canadian “shareholders will not be deemed to receive a dividend”. This means, that there won’t be any withholding taxes applied for non-residents.

Upside for odd-lot shareholders is only C$20 here, however, after a quick look, it seems that participating with larger positions could also be an option:

Dundee is a holding company currently mostly focused on the mining sector: 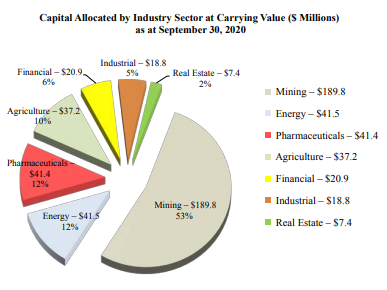 The company was founded and is still controlled (76% voting power, mostly through super-voting class B shares) by Canadian billionaire Ned Goodman and his family. Until recently, the company used to be run like a mess, after the financial crisis in 2008 it made a number of bad calls on commodities and got burned in the mid-2010s with the fall of commodity prices – share price was decimated from C$21/share in 2014 to C$0.80/share last year. In 2018 Ned’s son Johnathan took over the role of CEO and started a turn-around of the company.