Australian childcare services provider Think Childcare has recently received preliminary takeover interests from two parties. The first non-binding proposal came at A$1.35/share from Alceon Group (private equity firm with US$2bn AUM) and another one, week later (23rd Nov), was an overbid from a childcare group Busy Bees at A$1.75/share. The company is still reviewing the proposals without any further updates released so far.

Although the situation is still in rather early stages, there are several aspects that make the proposals (especially the Busy Bees one) particularly interesting:

The downside to pre-announcement stands at A$1.25/share (-17%). However, given the recent interest from two credible buyers, which clearly state that the company is worth more, I expect the eventual downside to be lower. Meanwhile, there is additional upside from potential bidding.

Given that CY2020 guidance of peers was not available, the relative comparison of 2019 results is provided in the table below:

The proposal comes at 10.5x 2019 EBITDA vs peer valuation of <7x, which definitely doesn’t scream undervalued at a first glance. However, the company is growing fast, executes 10+ new center acquisitions per year (quite cheaply, see section below), and therefore has reported considerably better 2020 performance than its peers’. H1 results showed revenues increasing by 3%, underlying EBITDA up by 24%, and NPAT up by 63% YoY, whereas TNK peers reported significant losses on all metrics. Moreover, in November the company has increased its CY2020 underlying EBITDA guidance from the previous A$15-A$17m to A$22-A$23m, considerably above the $14m generated in 2019. Whereas, the projected profitability of its peers seems to be just in line with 2019.

Of course, some of this growth was non-organic and achieved through M&A. During H2’19 the company acquired 15 new centers. 11 of them were expected to generate $4m underlying EBITDA in CY2020, so assuming the remaining 4 had similar profitability, the acquired EBITDA was supposed to be (without the pandemic) at around A$5.5m. This year in August TNK acquired another 6 new centers with an annual EBITDA of A$1.25m and 4 more in November with an annual EBITDA of $2.1m (the effect from these latest acquisitions likely had no/minimal impact on the improved EBITDA guidance yet). So overall it seems safe to assume that given the COVID-19 impact and excluding H2’19 and 2020 acquisitions the adjusted CY2020 guidance would stand at around $16m-$17m, which is still a 13%-19% improvement over 2019 results.

YTD stock price performance also suggests TNK stands out among its peers – TNK pre-announcement price was at pre-COVID levels (12th Feb), while GEM is down 32% and MFD decreased by 19%.

Adding up all these points, it seems that the premium valuation of TNK is justified, while at 6.6x CY2020 estimated EBITDA multiple, there is some headroom for a better offer as well.

Some more highlights on peer performance:

In 2017 the company has moved away from acquiring new centers on the market to developing their own services or acquiring them from third-party incubators. Acquisitions criteria is 75% utilization rate and $250k+ EBITDA.

The company acquires the new services rather cheaply (4x EBITDA) and then continues to grow them, improving the utilization rate/occupancy and profitability. Effective multiple (purchase price and earn-out/LTM EBITDA) of the services acquired in 2018 is now significantly better vs the 4x multiple made at the time the center was purchased:

In 2020 August, TNK has acquired 6 new Nido centers + 4 further pipeline services (for further development). In November, the company has acquired 4 more Nido centers, including 2 from Think Childcare Development and 2 from third-party incubators.

Currently, the company has 51 more new childcare centers (half from 3rd party incubators) in the pipeline worth over A$100 ($25 EBITDA), which it expects to acquire in the next 3 years. 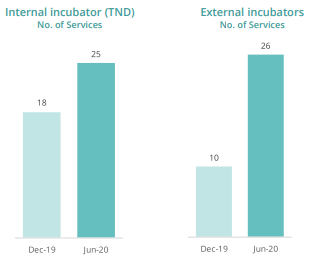