Haier Smart Homes, the Chinese home appliances manufacturer (one of the largest in the world, with $30bn in sales and $35bn market cap) has recently completed its listing on the Hong Kong stock exchange and now has 3 different listings. All three classes have equal economic value:

D shares consist of only 3% of the total share capital. And despite being economically equivalent they trade at 48% discount to the recently listed H shares. This offers an interesting opportunity to play on the narrowing of this discount as there are multiple reasons to believe that this will happen in the short term. Most importantly, the company has announced a large scale D share buyback (up to 57% of the free float). Eventually, I expect the gap between D/H shares at least to get in line with similar discounts of <20% of this type (e.g. BHP Group). At the current H share price this would be equivalent to €2.9+ per D share. Both share classes are very liquid and there is plenty of cheap borrow available on IB. 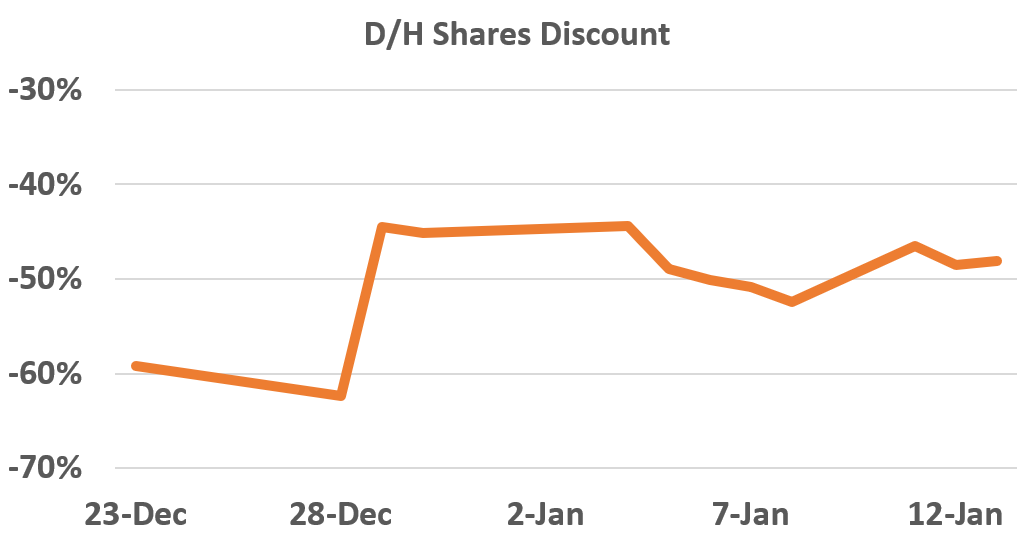 The only risks I could envisage for this arbitrage are potentially extended timeline and a potential increase in borrow fees. However, given the recently announced buyback (major catalyst) and liquidity as well as a far higher float of H shares, neither of the risks seems prominent.

It is quite common for a Chinese company to have 2 share classes – A shares (domestic) and H shares (HKEX). Domestic shares are not available to foreigners, so to appeal to a wider investor base, companies also list in HK. A and H shares are not exchangeable, while A shares almost always trade at a premium to H shares (due to China capital controls and somewhat limited investable universe of local stocks). However, unusually for a Chinese firm, instead of going for H listing, Haier Smart Home conducted an IPO in Germany in 2018. It seems like the offer wasn’t really successful – originally it intended to sell 400m shares, however, the offer was made for only 300m. All shares were subscribed at €1.05/share, the lower part of the €1.00 – €1.50/share range, while around 50% of the buyers were Chinese companies. After the IPO, the price tanked over 20% and until recently used to trade under €1.00/share. Since then D shares remained relatively stranded, ignored by the analysts, and presumably unknown by the market in general. As a result, D shares have been trading at a significant discount to A shares (much wider than the Chinese average H/A share discount of 40%):

As mentioned in the section above, D shares used to be fairly forgotten by the market. However, the recent listing in HKEX is likely to fix that. The appearance of another, economically equivalent, targeted at foreign investors, potentially exchangeable (not yet, explained below) listing will (and to some extent already has) catalyze market’s awareness of the Haier German listing. In fact, after the debut of Haier H shares, D shares have already shot up by 85%. In time, more and more investors should realize that they can buy the same company 2 times cheaper. Also, the count of H shares is 10x higher relative to the count of D shares (even bigger difference in terms of free float) – suggesting that a small percentage of H shareholders getting their eyes on the German listing might be enough to put sufficient buying pressure on the D shares and for the spread to start closing.

Some level of discount between H and D shares will likely prevail (till the time both classes will be made fully exchangeable). However, the discount among two equivalent share classes of this size (48%) is simply unprecedented and should not remain at the current level.

This is the most important catalyst for the thesis. The company seems to have recognized the extreme size of the discount and now intends to capitalize on it itself. On the 31st of December, Haier announced a large scale open market buyback during the six upcoming months. To put it short, the parent company, Haier International, currently owns 57m (21%) of Haier’s D shares and intends to increase its stake to €66m to €277m (including €57m already owned) of D shares:

The maximum limit of the current buyback amount stands at 58% of the remaining D share float (excluding Parent’s currently owned stake). If the buyback is carried out at this level I would expect the spread to close completely.

At the lowest limit, €9m of incremental buybacks, Parent would purchase only about 2% of the outstanding D shares. However, there are several arguments indicating that the buyback will be far larger than €9m. First of all, the economic incentive is very sound. Current buyback is actually the exact same Shareholding Increase Plan that the company announced in September’19, when the Parent has acquired the first €57m stake in D shares. However, apparently, it has been delayed until now by the matters related to HKEX listing. The Sept’19 announcement states that the Parent has acquired the stake in a private transaction from another shareholder, but doesn’t mention the price. Assuming it was done around the market price of that time, the purchase was settled at a 48% discount to A shares (vs 59% currently). A substantially larger current discount provides an even greater financial incentive for Haier to buy as many D shares as possible, especially when due to the existence equivalent and accessible by foreign investors H shares and the reasons explained above, the company can’t afford to wait any longer (the discount should only narrow in the future).

Another interesting twist is that Haier has not allowed H/D shares to be exchangeable at the moment, despite such option being possible from the regulatory perspective. The proxy for H share listing (see page F-291) clearly stated that there is a regulatory process available to exchange H/D. However, in the later documents the company has decided not to allow the conversion:

I don’t think Haier would’ve blocked the conversion option (seemingly temporarily, but that is only my personal guess) if they weren’t getting ready to capitalize heavily on this arbitrage opportunity themselves.

Concurrent with H shares listing, D share price has jumped up significantly and for the first time broke over the IPO price ( €1.05/share). So far the daily volume of D shares has increased 10x. 34% of the free float is owned by the original IPO investors and a further 34% by other major shareholders who have also acquired their stakes under €1/share. With shares currently 80% above the cost basis of major shareholders (vs €1.85 currently), some might be taking profits – this would help to explain why the spread is still so wide despite a drastic jump in trading volume.

It’s possible that with the initial excitement of the recent listing, H shares are a bit overvalued. This could be judged from Haier’s A/H share premium standing at lower levels than the average premiums of other Chinese dual listings in Shanghai and HongKong. This might drive the price of H shares lower in this way also benefitting the hedged D/H shares arbitrage.