Liberty Health Sciences, a vertically integrated medical cannabis retailer operating in Florida, is subject to an acquisition by its peer Ayr Strategies. Consideration stands at 0.03683 Ayr shares per each LHS share. Consideration is subject to certain adjustments: if the price of Ayr Strategies (Canadian listing) shares remains in the range of C$23.08 – C$27.15, the consideration will be capped at C$1/share (US$0.79/share) and if it gets below C$23.08, the exchange ratio turns to 0.0433. This adjustment structure provides decent downside protection for the trade.

250k shortable shares are available on IB at 9%, which reduces the upside by about 2% at current rates. Both stocks (Liberty and Ayr) have two official listings – in Canadian and U.S markets and trading on both markets seem to be quite liquid.

On the regulatory front, Ayr’s CEO stated that he doesn’t see any problems as there is no geographical overlap in assets and expects closing in late Q1/early Q2 2021.

Overall, given the strategic importance of the transaction for the buyer and seemingly low price, the risk of Ayr terminating the merger is quite low.

Below you will find more detailed aspects of this transaction. Some part of it is based on the acquisition conf. call, which was quite informative and is worth listening to. I found no public transcript yet, so the included quotes are my own transcript version (excuse me if there are any mistakes).

Liberty is one of the 22 license owners in Florida and operates 28 medical Cannabis dispensaries there. By the end of February, it intends to open 3 more stores and then another 11 stores by the end of the year. As of June’20 there were just over 300k registered active patients in FL, while the number of qualifying patients (are eligible to receive medical cannabis treatment) was 6m. So there’s plenty of room for further medical cannabis growth in FL.

Ayr is a top-performing, vertically integrated multi-state medical cannabis operator, which seeks to increase its presence in the most important U.S. states for the cannabis industry.

The cannabis industry is moving to another stage of development (from expansion/landgrab to operational excellence) and this transaction allows Ayr to secure a strong presence in medical cannabis sector in one of the most important states in the country – Florida. Ayr strategy is to buy underperforming/high growth potential assets in states with high population. The company has identified 10-12 such states and currently pending acquisitions will put it in 7 such states. In Florida there are only 13 serious competitors and Liberty Health is the 5th largest player in the state. Apart from Liberty, there are literally no similar targets that offer the same potential – other competitors are either significantly larger, or already being acquired, or offer limited growth opportunities. So, Overall, Liberty is being acquired for its retail footprint in FL and the buyer has been targeting it for 18 months already. Ayr’s CEO states (acquisition conf. call):

The reason why I though it was crucial to get this transaction done, FL is about a landgrab. If you think about it, most municipalities aren’t gonna allow 20 cannabis companies into their town. They’ve already started limiting the number of stores they actually want., the number of brands. So it is crutial to find a platform that can produce 42 retail stores through 2021 to make sure you’re locked in. […] If you’re not in today, you’re probably gonna get locked out in the future. So the landgrab was significant. […] If you’re not in certain municiplities, you’re probably never going to get there and that’s why it is crucial to do this transaction now.

Liberty is one of the most lagging medical cannabis firms in the state. Its cultivation yield per sq.ft. is one of the lowest in the industry (for comparison Ayr’s yield is 3.5x higher). Moreover, their cultivation efficiency is poor as well, 20% lower than Ayr’s. This results in Liberty not being able to provide enough flower for their stores, so they operate only 4 days/week. Revenue per store is also one of the lowest in the state. All of this offers a significant upside for Ayr (conf. call):

Today liberty’s assets are massively underperforming […] 20 grams per sq.ft. versus ours which is north of 70. This creates problem on their retail side, cause they only have flower for 4 days a week. They couldn’t open stores cause they don’t have flower.
[…]
Liberty sells out everything in its retail. Its never left with inventory. Its just that they sell flower only 4 days a week. If we can just get that to 7 days a week, as I said they’re doing $2m revenues per store. The average is $4.5m and it goes up to $10m per store, there is a tremendous amount of upside right here.
[…]
No one grow 20 grams per sq. ft. That’s just not a number that exists in the industry. If we simply get it to what we do or even to 50 grams/sq.ft, this investment looks so inexpensive. […] Some assets you can increase 30%, 40%, 50%. Here we’re talking about growing grams/sq.ft. that is 60% less than what we do. We’re talking about stores that don’t have flower in them.
[…]
They have 25% crop failures in testing. We have less than 5%. If we just pass when we put it in to have analysed, right, tested, if we just take it from 25% to our current average, there’s tremendous upside. The highest cost you can have in your cultivation is not passing tests. 25% of your harvest fails. Just take that to our average, that’s tremendous upside.

Ayr also sees an opportunity in offering their best selling products, which are not available in the state so far (neither among the competitor’s products):

While the production and the yields are lower than what we are currently doing and that is all upside, additionally FL allows for gummy bears and concentrates, and frankly, Liberty doesn’t produce that. We know how to do concentrates, we know how to do edibles cause we do it every day on a large scale. Simply bringing those products into the marketplace, creates enormous revenue opportunity.

So Ayr intends to invest 15m of CAPEX into Lib production improvements and get its operational performance to Ayr’s level. The improvement processes seem to have already started as about a month ago Liberty has hired a new head cultivator who apparently is a good colleague of Ayr’s head cultivator (from conf. call).

As a result, Liberty has the potential to become Ayr’s most important asset based on all metrics (market size, dispensary count, cultivation capacity, etc.). Footprint summary:

Overall, it really seems like this is a crucial acquisition for the buyer and it is rare to see a CEO of the buying company to be as excited about an acquisition.

Last week was quite important for the whole cannabis industry as democrats won the elections in Georgia and secured a slim control in the senate. This increases the chances of passing the MORE Act, sponsored by VP Kamala Harris and passed by the House of Representatives in December to decriminalize recreational cannabis on the federal level. However, the act was voted down by Republicans, which used to have a majority in the senate. Now that Democrats have control again, the chance of legalization on a federal level has increased. As a result, US cannabis stocks jumped by 20%, while certain analysts rushed to increase their price targets for the industry.

Overall, the development is very positive and is likely to catalyze further consolidation providing an additional incentive for Ayr to proceed with the merger.

Liberty is getting acquired at 6x est. 2022 adj. EBITDA. These adj. EBITDA calculations include the assumptions of getting Liberty’s cultivation yield to 70 grams per sq. ft., increasing revenues per store from the current $2m to the state average of $4m, having stores open 7 days per week, and opening 1 additional store per month on average. No potential upside from the recreational cannabis industry is included in the estimates. In 2021 Liberty expects to open 14 additional stores, so growing on overage 1 store per month shouldn’t be an issue. Other assumptions seem completely reachable as well with Ayr management taking the wheel and spending the planned $15m on capex. In this context, 6x forward adj. EBITDA multiple seems like a bargain price. Comparison with similar cannabis companies in Florida is difficult as currently there are only 13 serious competitors in the state, and most of them are either private or not generating positive cash flows yet.

The table below outlines forward multiples for a number of US cannabis companies. The names are not directly comparable to Liberty as they are all larger multi-state operators. However, directionally it is enough to get the idea of valuation levels in the industry. Also the after the recent run-up in cannabis stocks, the multiples are even higher than indicated in the table. For example, Trulieve the biggest player in Florida (50% of market share), now trades at 10x 2022 EBITDA (vs 8.9x in the table). In light of this, the takeover multiple of 6x for Liberty seems low.

Lastly, the Ayr’s CEO himself has stated multiple times that the transaction is cheap for them (see the quotes above as well).

In my view it’s gonna look very inexpensive in 9 months from now, because its such a massively underperforming asset with a terrific footprint, with cultivation building and already being built and it just needs to be tweaked.

Certain Liberty’s shareholders, led by James V. Baker (ownership % unknown) have gathered into a group (United Liberty Shareholders Group) that claims to hold “tens of millions” of shares and are opposing the acquisition. They also have a Facebook group with about 600 members. James V. Baker claims that given Liberty’s future revenues potential, it should be valued close to $3/share. The group intends to vote against the transaction. The total amount of shares they own is not exactly clear (I guess could be around 5%), however, if the opposition gathers more attention from the media, there is a chance that Ayr might consider improving the terms. Given the strategic rationale and the CEO’s comments, it seems that they really want those assets and would likely go for a price increase rather than risk losing the transaction.

There are a few examples of other acquisitions James V. Baker uses to argue that the current offer is undervaluing Liberty:

Worth noting that these examples do not include the actual operational performance differences among the assets. For example, although GSD is much smaller, its revenues per dispensary stand at $10m (vs $2m for Liberty). However, assuming that Ayr manages to significantly increase Liberty’s performance, the provided arguments seem quite fair and Liberty is undervalued relative to other transactions in the market.

The company is a vertically-integrated multi-state cannabis operator. The company owns 5 dispensaries in Massachusets (attractive locations in Greater Boston), 6 dispensaries in Nevada, and also operates a wholesale business – provides flower to 60+ third-party stores. Ayr is one of the most efficient operators in MA and NV markets ($10m revenue/store in MA and double that in NV) and is one of the most profitable vertically-integrated MSO’s in the country: 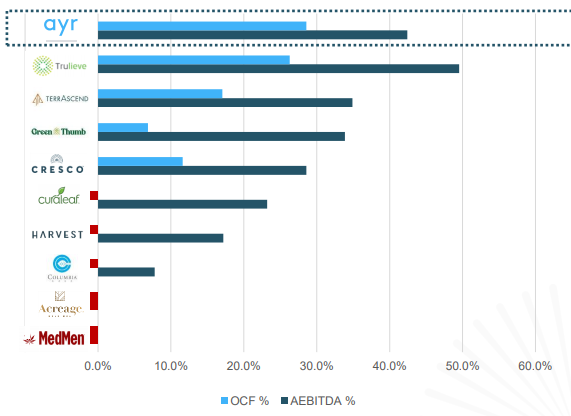 Despite that, the company appears to be one of the most undervalued firms among peers on a forward EBITDA multiple basis (refer to chart in the valuation section).

Recently Ayr has been on an acquisition spree and announced 7 takeovers. 2 of them (Pennsylvania) have already closed, and 5, including Liberty in FL and GSD in NJ are still pending. All of them should close by Q1, except for GSD which is expected to close in mid-year. After that, the company will be done with expansion and will focus on integrating new assets. 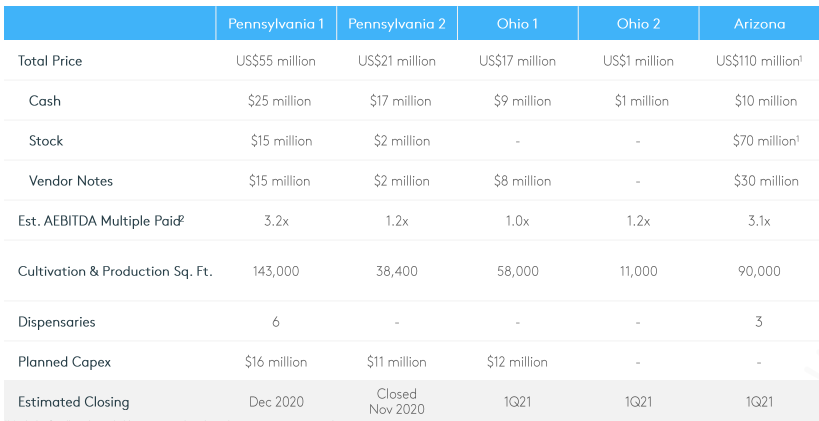