The year has started out great. In January 2021 we posted 12 new ideas and closed 9 cases. Two situations stood out quite exceptionally – METX (+175% return in one month) and CTHR (+91% in 3 months), which is up another 50%+ since we decided to close the position. More details on both of these cases are provided below.

Our SSI tracking portfolio has generated 17% return during the month – most of the gain was contributed by the METX and CTHR cases noted above.

Most of these are low-risk, protected/limited downside situations on a brink of an emerging catalyst. There is also an interesting case of a discount convergence between two share classes of the same company. It has already generated 25% return over a couple of weeks and is expected to bring another 25%-56%. Strong short-term catalysts exist for this to happen.

We are constantly seeking to improve SSI and members’ experience of our service. Last month we have conducted a survey of all members to see which direction SSI should move forward. We have received plenty of constructive feedback and many great suggestions – will do our best to take these into account and gradually start implementing them. So stay tuned – significant improvements are incoming!

The graph below details the individual MoM performance of all the active/closed cases (excluding Quick Ideas) during January. 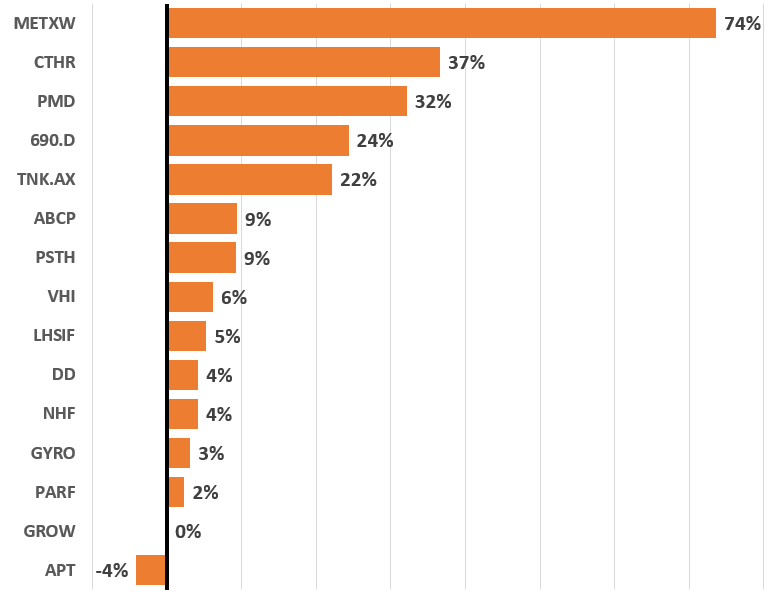 Meten EdtechX Education Group (METXW) +175% In One Month
Meten EdtechX Education Group was a failed post-merger SPAC that due to liquidity issues, temporarily reduced the exercise price of their warrants from $11.50 to $1.40 per each warrant. The situation provided an attractive arbitrage opportunity and it seemed that the offer was likely to go through as the company was impacted by COVID and needed extra cash to survive. Aside from that, insiders held a third of the warrants and also seemed to be incentivized to cheaply increase their ownership in METX. There was a 65% acceptance condition, however, it was eventually waived and the offer went through as expected generating +175% returns on the warrant price in one month.

Charles & Colvard (CTHR) +91% In 3.5 Months
Charles & Colvard, moissanite received an opportunistic acquisition proposal that was turned down by the board. At the same time an activist/largest shareholder with 10% ownership was pushing for the sale of the company with $2/share (150% upside) valuation in a conservative scenario. Downside appeared to be limited and the company looked cheap assuming recovery from COVID and a successful tunr-around plan. Eventually, the company announced Q3’20 results, which were very positive, and expectations for Q4 were even higher due to the holiday season, reopening of the stores, and addition of 50 new retail stores in Macy’. Insiders continued to acquire shares as well. All in all, many different catalysts seemed to be on the table. Although there have been no further news from the activist, CTHR stock appreciated significantly during the last quarter. The idea was closed with a 91% return in 3.5 months.

NexPoint Strategic Opportunities (NHF) +10% In One Month
Closed-end fund NexPoint Strategic Opportunities (NHF) launched an odd-lot tender offer to exchange 30% of its outstanding common shares at $10-$12 per common share. The consideration was supposed to be paid 80% in newly issued preferred (not yet listed) shares and 20% in cash. The eventual upside of the trade depended on two factors – tender price ($10-$12) and market price of the newly listed preferred shares. Several aspects indicated that the offer should get priced materially above the lower limit and that prefs should trade close to the 5.5% yield (at $25 par value). As expected, the price was set to $12/share, while pref shares started trading somewhat below initial expectations at around $23/share. The idea generated 10% return in one month.

Newater Technologies (NEWA) +9% In 3 Weeks
This was a rather standard US-listed Chinese company privatization. Manufacturer of water membranes Newater Technologies signed a definitive agreement to get taken private by its chair/CEO and CFO at $3.65/share. The definitive agreement indicated high success chances, while shareholder approval seemed easy to reach as buyers owned 44% of NEWA. Price also appeared favorable to the buyers. Eventually, the stock price jumped up considerably without any news. We’ve closed the idea at a higher price than the offer, resulting in a 9% return in 3 weeks.

CIMC-TianDa Holdings (0445.HK) +8% In 2 Months
This was a going-private transaction in Honk Kong. CIMC-TianDa announced a privatization offer by parent CIMC Group and Macao QiXin private equity fund. Consideration stood at HK$0.266/share in cash. The offer was subject to tight shareholder approval requirements (as usual in HK), however, given the consent from the largest shareholder and favorable price it seemed that shareholders should support the transaction. Management argued that in order to make the company’s transformation more efficient, it needs to be relieved from short-term goals, so it will show better results while being private. Eventually, shareholder approval was received and the merger closed successfully.

Cellular Biomedicine Group (CBMG) +6% In 5 Months
Cellular Biomedicine Group signed a definitive agreement to be taken private by a consortium of management and all major shareholders (owned 55% combined). Price was set for $19.75/share. The buyers’ group seemed credible (included a major pharma player Novartis) and given the signing of definitive agreement, the offer seemed likely to close. CFIUS approval was the largest risk, however, it was eventually received and the spread was eliminated.

Orca Exploration (ORC-B.V) +C$40
This was a tiny situation for odd-lot investors in Canada. Orca Energy Group launched tender offer for 25% of its outstanding Class B shares. The price range was set at C$6.50-C$7.50/share. Oversubscription seemed nearly guaranteed, however, the offer included odd-lot priority. As expected, the proration ended up at 32%.

Prevail Therapeutics (PRVL) – Potential for 7x In Several Years
Prevail Therapeutics was getting acquired by pharma giant Eli Lilly. Consideration was $22.50/share in cash + $4.00/share nontransferrable CVR payout. CVR was conditioned on commercial use approval for any of PRVL products (11 candidates) in any of the given markets (US, Japan, UK, Germany, Italy, or Spain) till the 31st of December’24. As expected, the transaction has closed successfully, leaving a potential 7x return on the cost of CVR (was $0.58 at the time of the write-up).

3P Learning (3PL.AX) -2% In 2 Months
3PL (Australian online education) received two takeover proposals – one from IXL Learning at A$1.35/share and another one from Indian ed-tech giant BYJU’s at A$1.50/share. IXL Learning proposal had already been rejected and voted down by the largest 3PL shareholder Viburnum Funds, which recently acquired a blocking stake of 25%. BYJU’s was still conducting the due diligence at the time of the write-up. Eventually, after conducting due diligence, BYJU’s did not go for a firm proposal.

CCUR Holdings (CCUR) -2% In 3 Weeks
CCUR Holdings intended to go private via a 1 for 3000 reverse stock split transaction. Shareholders holding less than 3000 shares were to get cashed out at $3.06/share. Recently, the company has filed that they’ve been potentially defrauded by one of their clients for $14m (half of the market cap). This has substantially increased the risk of transaction cancellation, and the idea was closed with 2% loss.