This idea was shared by Lucas.

This a speculative idea of a potential company sale with a rather well-protected downside. You also should not be discouraged by the name of the company – it is not involved in the psychedelics business, actually, quite the opposite.

Recent events indicate that it’s quite likely that Psychemedics (hair follicle drug screening services) could get acquired in the short term:

Opportunistic timing increases the chances of a takeover. Due to the COVID-19 outbreak drug testing volumes were strongly impacted. However, the company is recovering and the demand for its services is expected to resume quickly after the pandemic is over. PMD still trades 50% below pre-COVID levels, while the demand for drug screening is expected to resume quickly. Assuming the eventual recovery in revenues to 2019 levels PMD currently trades 0.82x EV/Revenue multiple, which is cheap for a consistently profitable company (pre-COVID). Also it is below the historical PMD valuation multiples as well as below peers.

Aside from the potential sale catalyst, the PMD share price is also expected to be positively affected by Q4 results, return to profitability, and resumption of quarterly dividends, which were suspended in Q1’20.

He is a credible investor with quite an impressive track record. Previously he was a founding member and managing partner of ValueAct Capital ($9bn AUM now) and later founded 3K Limited Partnership (not much available info). His personal SEC filings reveal that he rarely crosses 5% ownership in a company, however, the track record is great and he seems to really have a knack for spotting undervalued stocks (many of them get acquired later on). A few of the “more recent” examples:

Overall, I think that his involvement here, especially after the initiation of a strategic review is a very positive sign.

Psychemedics provides drug testing services through the analysis of hair samples. The Company’s testing methods utilize a patented technology that digests the hair and releases drugs trapped in the hair without destroying the drugs. The company claims that it is the only hair testing laboratory that manufactures its own screening assays and has full control over all aspects of its technology.

Hair testing is apparently superior to urine testing as it provides much longer-term analysis, can be easily re-tested (unlike urinalysis, where the presence of a drug is gone in 1-2 days), and is much harder to “cheat” on. Pretty much the only drawbacks of a hair test are that drug evidence appears in hair samples only 5-7 days after the ingestion and that the price is higher than for urine test. 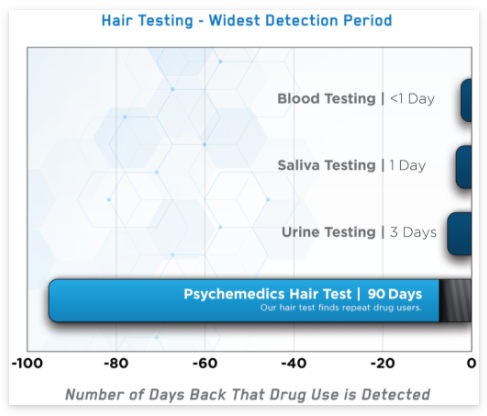 PMD focuses on the private sector offering services for workforce and job applicant testing. The company claims to serve over 10% of Fortune 500 companies, major police departments, Federal Reserve banks, etc. It also provides testing for schools and parents (to test drug use of their children).

Psychemedics used to operate only in the US, however, in 2016 Brazil government passed a law, requiring all professional drivers to do a drug test before applying for their licenses. The demand for hair testing skyrocketed and PMD has successfully jumped into the train with 2016 revenues increasing 44% YoY and Brazil segment generating over 33% of the total revenues. The market seemed very optimistic about the prospects, especially when in 2018 Brazil was expected to pass another law, significantly shortening the license renewal period and doubling the demand for testing. Unfortunately, the law was not passed and revenues from Brazil started declining (down 25% in 2019) due to market conditions and lower volumes.

The company was significantly impacted by the COVID outbreak, which put significant pressure on the revenues and made the operation unprofitable for the 9 months of 2020. Due to the pandemic, Brazil has closed all driver license bureaus and extended the renewal period for all drivers. Q1 revenues fell 23% YoY (domestic -10%, international -57%). Q2 revenues decreased 64% YoY (domestic -54% and international -92%), however, some signals of recovery appeared with June avg. volume increasing 79% over April. The CEO stated (PR):

Had we not had these unusual legal expenses, along with the PPP inclusion in income, our earnings for Q2 would have been almost breakeven.  As such, we believe these reported results do not reflect the real underlying strength of our company.

We saw a significant improvement in our business in the third quarter versus the second quarter. We are still not at our pre-COVID-19 (Coronavirus pandemic) levels; however, each month in the quarter showed an increase in testing volumes over the previous month.

And the company expects to see significant performance improvements in the US segment going forwards (PR):

We believe these reported results do not reflect the real underlying strength of our company. We look for continuing improvement as the country continues to open up. Companies and our clients continue to give us feedback that they need to be even more vigilant than ever to try to keep drug abusers out of the workplace given the long shut-down of the country. Therefore, we believe we are well-positioned, especially in our domestic business, as the economy recovers.

Risk with the Brazil segment

The major risk lies with PMD’s Brazilian operations (27% of revenues in 2019). The business is sold there through only one independent distributor. The distributor only sells the tests (no labs or testing services are provided). In 2018, the distributor (independent at the time) was acquired by a much larger (US$500m) Brazilian medical labs firm Instituto Hermes Pardini (ref. IHP). The distribution contract is subject to termination by a 90-days notice. So given the size of IHP, there is a substantial risk that it could eventually pull out of the agreement and go for developing its own product instead. On the other hand, the distribution agreement apparently allows IHP to market and sell its own competing product alongside PMD tests, so the issue of competition is not that sharp as it seems here.

The second issue is that due to the license renewal deadline extension of 18 months in mid’20, revenues from Brazil will likely remain depressed until the end of this year (Q3’20 report):

Due to COVID-19, the Brazilian government extended the renewal period for drivers licenses to 18 months, causing a major fall off in volume and revenues from Brazil.

Previously, Brazil revenues generated around 30% of PMD revenues, however, in Q2 it was only 5% and in Q3 – only 1%. This gap of one additional year creates substantial uncertainty regarding future operations in Brazil, especially in light of a new significantly larger distributor, who controls the sales in the country.

Nonetheless, the bullish scenario still remains, and operations could potentially return to 2019 levels (or higher) very quickly after the extension is over. The additional catalyst of the new law shortening the renewal period is also a possibility. The law was supposed to go into effect in 2018 and then was delayed to 2020 (annual report, p.14), however, due to the COVID outbreak, the government was forced to extend the renewal period instead to keep people from spreading the virus.

The company states that it has received positive feedback from its clients re intentions to increase drug testing in the post-COVID environment. The additional stress induced by the pandemic has already increased (is expected to increase further) the drug abuse in the workplace. So the demand for PMD services is likely to resume rather quickly.

Assuming full recovery (including Brazil operations too), PMD currently trades at 0.82x 2019 revenues. This is significantly below testing industry peers. This comparison is somewhat skewed as all of the public peers are significantly larger-scale multi-billion companies with diversified testing products. However, keeping in mind that before COVID, PMD used to be constantly profitable (operating margin in 2019 was 8% vs 11% for LH), the 0.82x multiple seem low.

Note: PMD EV is calculated assuming $1.7m forgiveness for the PPP loan (as expected by PMD). 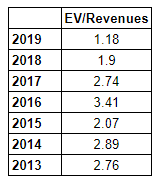 Even assuming the eventual closure of Brazil operations, the 2019 revenues multiple valuation still seems low as before 2016 the company used to trade at 2x+ EV/revenues with flat revenues of around $26m-$28m annually.

Recovery in revenues to 2019 levels and 1.2x multiple would price PMD shares at around $8/share (46% upside from the current levels). This target does not seem like a stretch, especially considering likely the takeover premium in case of a merger proposal.