One of the major cannabis multi-state operators Cresco Labs is acquiring a small Florida retail player Bluma Wellness. Consideration stands at 0.0859 Cresco shares and is subject to downside protection adjustments: if Cresco shares fall to the range of US$9.99 – US$7.00/share (currently at $15.70), consideration will be fixed to US$0.86/share. If Cresco’s share price falls below $7.00/share, the exchange ratio will be fixed at 0.1229 per Bluma share. Closing is expected at the beginning of Q2’21.

Given the size of the merger (US$170m) and Cresco’s absence in FL, regulatory approval should not be an issue (as further evidenced by the relatively short indicated closing time). 40% of Bluma shareholders are supporting the transaction. The price comes at around 12x+ estimated 2020 revenues of Bluma, which is definitely not a low valuation for a small cannabis player. Initial premium to pre-announcement price was 29% and now stands at 55%, which adds further confidence of a favorable shareholder vote.

Major risk is merger cancellation or terms amendment, especially, when the buyer has already terminated a number of other mergers. This might be partially responsible for the current spread. However, in my view previous terminations/term amendments were carried for legitimate reasons under specific market conditions (more info below). Bluma acquisition is different – market conditions are now very favorable and the strategic rationale is sound.

Overall, it seems very likely that the deal will close as expected, however, keep in mind that merger arbitrages in the cannabis industry are generally on the riskier side.

Cresco (listing in US with ticker CRLBF) borrow appears to be plentiful at a 3% annual fee (IB).

Keep in mind that BWEL-U.CN listing is in Canada, however, the share price is quoted in USD. Also the US listing BMWLF appears to be more liquid than the Canadian one.

This acquisition is a pure land-grab deal, which will allow Cresco to secure a market presence in the 3rd largest US state (2nd largest with a green light for medical cannabis). This rationale was summarized well by the CEO of Ayr Strategies (Cresco peer, currently making a similar expansion into Florida):

FL is about a landgrab. If you think about it, most municipalities aren’t gonna allow 20 cannabis companies into their town. They’ve already started limiting the number of stores they actually want. […] If you’re not in certain municipalities, you’re probably never going to get there and that’s why it is crucial to do this transaction now.

The merger will enhance Cresco’s retail segment and add 7 new dispensaries to their current 20 stores. Blum is one of the fastest-growing new cannabis players in the market – it started operations a year ago and is expected to generate about $14m sales in 2020 (Q2 revenue growth was 190% QoQ, Q3 – 50% QoQ, Q4 growth is estimated to be over 120% QoQ). Moreover, Bluma is expecting to more than double their number of stores in the short-term (from 7 to 15).

Cresco has been eyeing Florida for quite a while now – it tried to enter this market in 2019 by acquiring VidaCann (private, 7 stores at the time) for $120m. However, due to certain market circumstances/structure of the merger (more details in the section below), the whole thing was called off and the company focused on its other segments instead (Illinois and Pennsylvania), while promising to come back to FL with a more capital efficient move:

We will continue to monitor Florida closely for opportunities to enter the market in a capital-efficient manner.

This time the situation is different – Cresco’s IL and PA segments have already been strengthened considerably, and the FL market appears to be more attractive than ever:

This is the major caveat for the transaction. Cresco has a history of flopping/amending transactions, however, in my view all of those happened for legitimate reasons, which are either not present in the current situation or not posing a big threat:

In light of these cases, the current Bluma merger consideration being all-stock is an advantage.

As for another potential market crash – the whole industry is still riding the tailwinds from the increased chance of federal legalization. The merger is expected to close in 1.5-2 months, while the government will likely take much longer to take any decision on this front. So I expect the cannabis stock prices to stay elevated at least until the upcoming vote in the Senate this year.

Bluma is a cannabis retailer operating in Florida. Previously it operated as a subsidiary of Canadian investment firm SOL Global Investments (ticker: SOL.CN, US$255m market cap) under the name of CannCure. SOL Global acquired CannCure in 2019 for $41m and made two further investments of $2m and $6.5m for a total of around $50m. In comparison, the current offer values the company for around $170m (EV). In May’20 CannCure conducted a reverse merger with a shell company Goldstream Minerals and changed the name to Bluma Wellness.

The company has acquired its first dispensary in FL at the end of 2019. By mid-2020 the number was expanded to 3 and currently Bluma owns 7 stores. Short term plan is to expand to 15 dispensaries.

Cresco
Cresco Labs is one the largest vertically integrated multi-state cannabis operators in US. It owns a dozen of different brands with a total of 350 products. The majority of its business is wholesale (62% of revenues) – Cresco sells to 700 dispensaries in the US. Additionally, it operates 20 retail dispensaries (38% of revenues) in 9 states, including 6 top states (7 with Bluma). 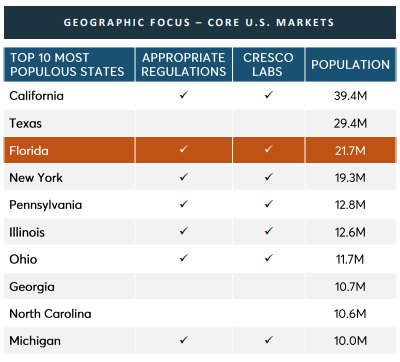 The company has made several acquisitions before. Recently it closed Verdant Creations (4 dispensaries in Ohio) for $2m, while the largest transaction up to date has been Origin House ($1.1bn initially, about $500m when it closed).