This idea was posted on VIC when the share price was lower and uncertainty much higher. At this point the situation presents close to risk-free opportunity to benefit from the expected better offer for the minority shareholders in GTX voluntary bankruptcy case. Keep in mind that this write-up and investment idea include various legal issues and nuances – I am not a lawyer so take whatever I am saying with a grain of salt and do your own due diligence before investing.

Garrett Motion (manufacturer of turbochargers) voluntary bankruptcy is proceeding very fast and seems to be geared to enrich the controlling shareholders (58% ownership) at the expense of minority owners. Recently the offer by controlling shareholders was selected as a winning bid and includes an equity cash-out option of $6.25/share – making the downside well-protected at current share price levels. Meanwhile, the equity committee and minority shareholders are opposing the winning bid and claim that other bidders have made superior proposals (for both creditors as well as minority shareholders). On top of that, equity committee came up with its own reorganization plan, which at least on paper seems to offer more than 100% upside for minority shareholders in the long term and the latest revision includes $7.00/share cash-out option (documents have not been finalized yet).

However, for the equity committee proposal to be considered, bankruptcy court needs to terminate GTX management’s exclusivity to select the winning bid on its own (the management is obviously favoring the interests of its controlling shareholders). There are a number of arguments – outlined in the sections below – suggesting the exclusivity is very likely to be terminated. And if it does happen, shareholders can expect higher cash-out price, further bidding war, or simply a more favorable outcome from the equity committee’s plan.

Equity committee motion to modify exclusivity will be heard by the court on the 16th of February.

GTX was spun-off from Honeywell in March’18. Together with the spin-off, it has entered into an Indemnification and Reimbursement Agreement, which bound the company to cover Honeywell’s costs of personal injury claims of the employees exposed to asbestos-containing products stemming from the Honeywell Bendix division. In Dec’19 GTX went to court arguing that the agreement was improper and seeking relief from these liabilities. The court hearing for this litigation is set for the first half of Feb’21.

In Sept’20 GTX filed for Chapter 11. The company was actually solvent and the main purpose of this bankruptcy was to eventually get rid of Honeywell’s legacy liabilities ($1.4bn at the time of the filing). Honeywell is fighting to keep these liabilities intact and has partnered with two GTX controlling shareholders (Centerbridge and Oaktree) to win GTX bankruptcy auction with a proposal that would see Honeywell’s liabilities almost fully covered.

Through bankruptcy proceedings, Garret Motion has conducted an auction for the operating business where three parties showed interest and have been increasing their offers multiple times.

Right after the announcement of the winning bidder, equity committee (formed to protect the interests of the equity holders), has started an opposition campaign against COH’s offer claiming it is favoring the controlling shareholders and significantly and unnecessarily dilutes the minority investors. As reported by the committee, most minority shareholders (40%-50% of them) also objected to COH’s offer. Consequently, the committee has proposed its own standalone plan, which would have similar creditor settlement terms as the COH offer (including Honeywell), but significantly less dilutive to minority equity holders. The latest iteration of the equity committee plan also seems to come with a $7/share cash-out option.

All of the offers came in different structures and terms, however, the most important value factor for minority shareholders is the actual percentage of the equity being reinstated for pre-petition owners after the restructuring. This is illustrated in the following table (as presented by the equity committee):

Clearly, COH proposal was designed to favor controlling shareholders at the expense of the minority investors. Assuming full shareholder participation in the pref offering, equity would still get diluted significantly – current equity holders would own only 30.7% of the post-organized equity, with the rest of value transferred almost solely to the controlling shareholders through issuance of very lucrative preferred convertible shares. Meanwhile, equity committee’s standalone plan would allow significantly larger participation in the reorganization resulting in 96% of the equity being reinstated. The value difference caused by the dilution also very visible in the long term projections:

Equity committee has stated that the COH proposal “needlessly transfers $1.1bn value away from shareholders” and now has filed a motion to terminate GTX exclusivity to file a plan of reorganization.

For the court to consider the termination request it must pass the requirement of “cause” – the interested party must demonstrate that there is sufficient ground for such a request. The are several “cause” factors that the court considers, yet not all of them are relevant for each case (page 2).

Equity committee is currently seeking to terminate debtors’ (=GTX) exclusivity and have its own standalone plan to compete with COH proposal. The whole case is presented in detail in the Equity Committee’s Motion Filing, which also provides a lot of details on the background of the sale process and is well worth reading.

The committee argues that termination would make a “good faith progress toward reorganization”, which debtors failed to achieve by completely ignoring its equity holders. It also clearly shows how one-sided COH proposal is and throws light on rather strange debtors’ behavior during the whole process, e.g. filing bankruptcy for a solvent company to nullify Honeywell’s liabilities, then choosing COH proposal (which largely keeps those liabilities intact) over KPS during the last minute. In fact, the whole background and auction sale process described in the docket would make a rather good script for Billions (TV show).

Overall, to my uneducated eye, the committee’s case seems sound and there are several reasons to believe that the court might make a favorable decision here:

It would be an interesting conundrum for Honeywell if somebody else proposed a plan that had the exact settlement terms . . . as to Honeywell but different terms as to other people as to how exactly Honeywell would explain that that was improper.

The standalone plan from the equity committee offers exactly that – same settlement for the creditors + significantly less dilution for the minority shareholders and now even the cash-out option at a higher price. Thus, it would be hard to imagine the judge turning away from the interests of the minority s and approve COH proposal.

Worth noting that even if the exclusivity termination is not granted, the current opposition of the equity committee can still be valuable when the court will evaluate COH offer:

Even if the court does not terminate exclusivity, the parties will have alerted the court as to their concerns and will have previewed issues that may arise when the debtor ultimately files a plan.

I’m not exactly sure if under these circumstances the judge could singlehandedly block COH proposal and to what further developments it could lead (if anyone has an insight on this, please share).

Debtors have, of course, objected the motion. However, I think their contra-arguments are significantly weaker than the equity committees.

With the situation that we currently have on our hands, the downside is protected at $6.25/share (COH cash out option). However, there are several potentially favorable developments that could take place in the future. The most important is whether the court will grant the termination of exclusivity. As quoted by the equity committee:

Termination of exclusivity provides an open market for competition in the form of competing plans.

This should get decided during the upcoming weeks – equity committee motion hearing set for the 16th of February.

If the exclusivity is terminated and the equity committee files its own standalone plan then we have a number of ways to win here as GTX minority shareholders:

If the exclusivity termination is not granted, then as stated above, there is still a possibility that the judge would consider all the issues raised by the committee and minority shareholders and decline to approve the COH offer at its current terms.

The worst-case seems to be that if COH offer goes through at current terms, the downside is protected at $6.25/share cash-out option.

Just a quick note regarding the asbestos claims. The hearings regarding the validity of Honeywell liabilities are set for the first half of February. Overall, it’s quite likely that Honeywell’s claims will be cut significantly by the court.

Honeywell has been acquiring GTX shares from October to mid-December (paid up to $4.20/share). At this time, KPS proposal was considered to be the leading bid. However, under KPS offer, for equity shareholders to recover anything of Honeywell’s liabilities had to be cut by 63% and for shareholders to recover anything above $4.2/share those liabilities have to be cut by 80%-90%. These purchases seem to suggest Honeywell itself expected the court to cut these liabilities significantly (this theory fails if there was some kind of secret pre-agreement that COH offer would be announced as a winning bid eventually). KPS bid was valuing Honeywell’s liabilities at zero. Gabelli Funds also called Honeywell’s claims overstated and eventually sued the company.

The background of the situation is provided in the section below. Some additional details on the background and auction process can be found in the equity committee’s filing (docket 794). 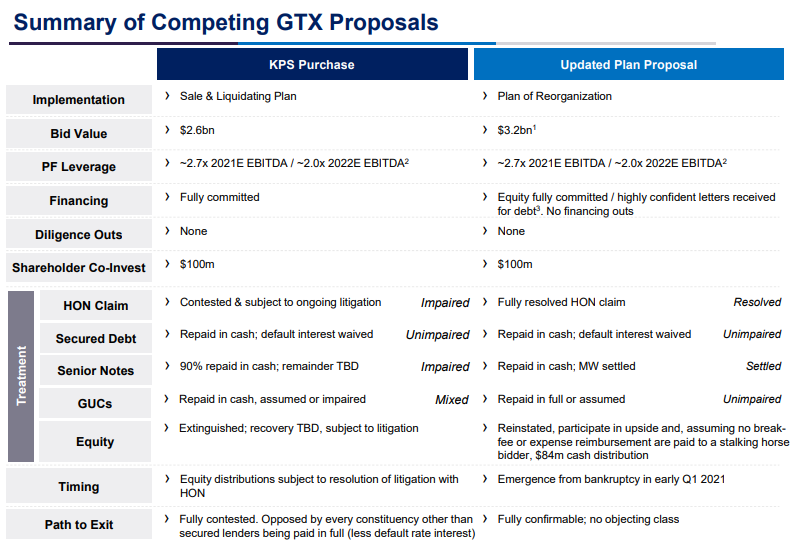 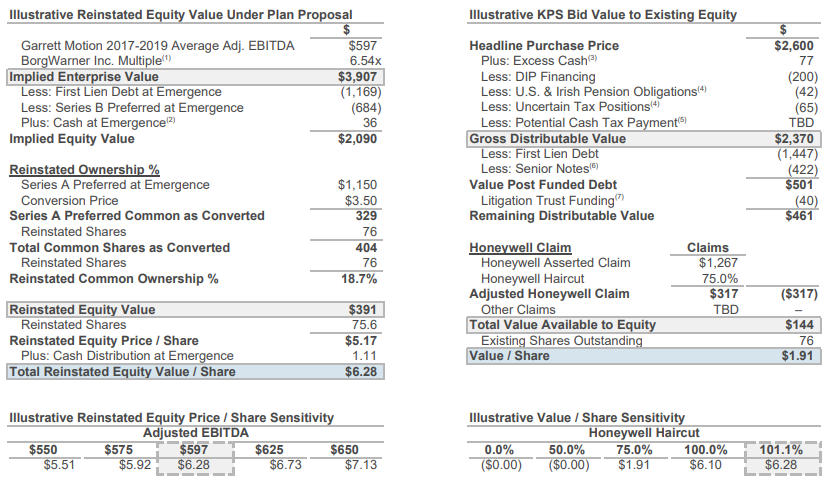