This is a quick and fairly speculative short idea with an upcoming catalyst in 1-2 days. For background on the company please refer to the short thesis published on VIC a year ago.

PLMR is an extremely overvalued insurer, which currently trades very close to an all-time high price and extreme 8x BV / 150x TTM earnings valuation. The company has reported significant (almost equal to the net premiums earned) catastrophe losses in Q3’20. The results were followed by a strong sell-off in shares (-30%). Estimated cat. losses for Q4 are also very sizeable (around 40% of the usual net earned premium per quarter) and I expect Q4 results announcement to trigger a similar sell-off. The earnings should be released in the upcoming days (16th-18th Feb). Q4 estimated cat. losses are smaller than in Q3 and therefore share price reaction might be more muted. However, there are a few other aspects that further support the overall thesis – slow down in growth and regulators putting a stop on PLMR’s camouflaging of poor results.

There is also a chance that similarly to Q3 price reaction, the sell-off could translate into a downtrend/extended decline. The stock is already wildly overvalued and it is only a matter of time until the market realizes that – the upcoming results could act as a major catalyst in that direction. However, as the saying goes – markets can remain irrational longer than you can remain solvent. This is especially true in today’s environment. Thus, my bet is on a short-term (1-3 days) share price slump only.

The biggest risk is that for some reason Q4 results will trigger an opposite price reaction and PLMR stock will jump up. However, the share price is already above the level when the estimated cat. losses for Q4 were announced (4th of February). Moreover, PLMR is now trading close to an all-time high price with absurd valuation multiples. Therefore, even in the worst-case scenario, the downside should be limited.

1m shares are available for borrow on IB, at a 0.3% annual fee rate.

PLMR is an insurer focusing on earthquake and specialty homeowners insurance. Underwriting segments include:

Over the last two years, due to a variety of reasons, PLMR share price has skyrocketed tenfold reaching an unbelievable 8x BV and 150x TTM earnings valuation. The reasons include a rather quick topline growth as well as highly promotional investor communication. PLMR management is selling to investors a completely ungrounded competitive advantage story using creative accounting (aggressive adjustments to bump earnings) and promotional/vivid language in their PRs. The company has even created its own non-GAAP valuation metric – adjusted EPS ex. catastrophe losses. The whole thing is apparently loved by Wallstreet analysts, who continue to pump the company issuing bullish reports based on creative new metrics (EV/gross written premiums, etc.). Overall, this valuation bubble should eventually burst. A solid and detailed valuation short thesis has already been presented in the VIC article mentioned above (March’20). However, over the last year PLMR price continued to increase even further from 5x BV to the current 8x BV. It is difficult to explain such multiple expansion – it might have been caused by massive money inflows into various funds and ETFs since the start of the pandemic (PLMR is a constitute in several fairly large indexes, e.g. Russell 2000, S&P 600, etc.) as well as retail investor inclination towards growth story stocks.

The sour fruits of management’s focus on an aggressive expansion and deceptive claims (underwriting edge based on superior tech platform) started emerging in Q3 2020. The company reported very sizeable catastrophe losses related to 4 hurricanes in Q3’20 – $36.5m vs $42m of net earned premiums in the same quarter. These losses used to be almost non-existent (see the table above) and materialized as a result of expansion into specialty homeowners and commercial all-in segments (outside of the management’s core competence, earthquakes). The announcements were followed by quite interesting price action: 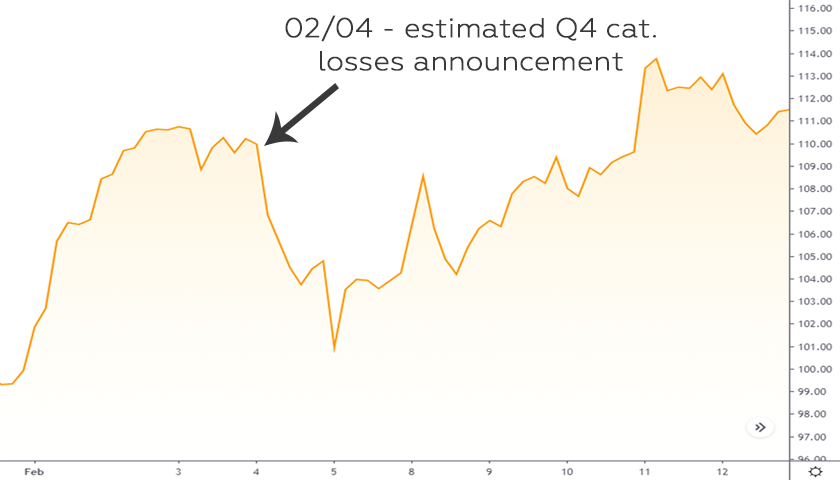 The press release with Q4 results with high catastrophe losses and exit from some of the businesses are going to be issued this week (most likely on Wednesday/Thursday). I expect the announcement will be followed by a slump in share price and likely a larger one than on the 4th of February. The idea of betting on the assumption that the recently announced losses are not already priced-in and will surprise the market is a bit speculative. However, Q3 situation showed that such an outcome is very possible. Given that a substantial amount of PLMR investors are growth story chasers/momentum investors, I highly doubt that many of them read all press releases other than the result announcements. Moreover, various algo traders/quants might be also picking up the new data only from the quarterly performance releases (same thing probably happened with Q3 results).

Other than that, it is very likely that Q4 performance will be poor and trigger the sell-off. Aside from the $15-$16.5m cat. losses the company has started exiting its 2nd and 3rd largest business segments (29% of GWP combined), which will likely be reflected in lower growth (it has already slowed down in Q3). Moreover, the company will no longer be able to camouflage their performance with the nonsensical ex. catastrophe losses metrics. This “invention” has actually received attention from the SEC, which on the 21st of Dec, issued a letter to PLMR forbidding it to exclude cat. losses from the non-GAAP metrics. This should also play a part in laying bare the lackluster results. From the letter:

Please represent to us that you will not present your non-GAAP performance measure, adjusted net income excluding catastrophe losses, in your future annual or quarterly reports, earnings releases and/or any other material provided on your website or otherwise. In this regard, we note that you are in the business of writing insurance policies that specifically cover the catastrophe losses you remove in this non-GAAP performance measure and that these claims are normal, recurring cash operating expenses.

And with all that, keep in mind that PLMR already trades at 8x BV and is close to an all-time high price.