This is a fairly interesting CVR situation, which involves high uncertainty due to some political aspects in a third-world country and potentially extended timeline. However, the upside is quite attractive and several recent developments have increased the chances of a favorable outcome. But keep in mind that this situation is in the mining industry, where things rarely turn out as expected.

In early 2019 one of the major silver/gold players, Pan American Silver, acquired Tahoe Resources. The consideration included a contingent value right (ticker PAASF) exchangeable into 0.0497 PAAS shares upon restart of the Escobal mine – the flagship asset of Tahoe. The restart will be considered effective upon the first commercial shipment of concentrate. The rights expire only in 2029 (arrangement agreement), so there seems to be plenty of time for positive developments. At current prices the spread between PAASF and PAAS stands at 100%. It’s possible to play this trade both hedged and unhedged, however, unhedged trades leave investors exposed to silver price fluctuations. Plenty of cheap PAAS borrow (0.34% annual fee) available on IB.

The mining operations in Escobal have been suspended since 2017 due to certain opposition from anti-mining group and locals claiming that the government has violated the rights of consultation of the local Indigenous Xinca community when the mining license was issued in 2013. In September 2018 the constitutional court ruled that in order to restart the mine, a 4 stage (review, pre-consultation, consultation, and court approval) consultation process is required – the decision was based on the International Labor Organization (ILO) convention rule 169. The review stage was completed rather quickly and at the time operations were expected to resume at the end of 2019/early 2020. However, since then the process has stagnated due to various political nuances, Guatemala’s government elections (end of 2019), and then the COVID-19 outbreak. On a positive note, the newly elected government appears highly interested in resuming Escobal mining operations and has already started pushing the process forward. Several other aspects also suggest that the mine is likely to get restarted.

The timeline is quite uncertain at the moment, however, stage 2 (pre-consultation) is set to start in April and is expected to take 2-3 months. The consultation stage should follow after that.

Risks involve potentially extended timeline, questionable political situation in Guatemala (see the risks section below) as well as hedge/silver exposure-related caveats. And there is always a risk that PAAS will wiggle out of CVR liabilities, however, the conditions for conversion seem really straightforward – the first commercial shipment of concentrate from Escobal.

On the 14th Jan’20, Alejandro Giammattei was elected to be the new president of Guatemala. He is a strong supporter of the mining industry and has promised to “restore confidence n the mining industry within his first 90 days in the office” and a swift conclusion to the Escobal situation. Due to the COVID-19 outbreak shortly after, the plans got delayed substantially. However, the president indeed took action to back up his words: declared martial law in two other states opposing mining operations and appointed Juan J. C. Alonso as a Special Secretary to the Vice President. From 2013 to 2019 Alonso acted as a general director of the Guatemalan subsidiary that operates the Escobal project (now called Pan American Silver Guatemala) and was responsible for obtaining the Escobal mining license back in 2013. Moreover, Escobal consultation has been pushed forward as well – the government has finally recognized 59 consultation representatives of Xinca indigenous community, which was a major hurdle in the whole process.

The Supreme Court favors the interest of the mining industry

Certain reports from the anti-mining, opposition groups portray a very biased Supreme Court, which is looking out for the interests of the mining giants instead of the local communities. over the last two years the supreme court has completely ignored numerous claims from the Xinca Parliament and has eventually rejected them:

The Supreme Court issued a blanket rejection of all the legal chanllenges presented by the Xinka Parliament relating to the failure of the government and company to comply with the key aspects of the Constitutional Court order, signaling the court’s intention to clear the way for the process to proceed despite procedural errors and violations of due procvess dating back to 2018.

Moreover, in 2017 the Supreme Court has already tried to reinstate Escobal’s mining license. The decision was appealed by the anti-mining group, so the operations were not restarted (see the timeline below). Nonetheless, this clearly shows that once the consultation stage is over, the court’s approval should not be an issue.

Another positive aspect is that in contrast to the usual biotech industry CVRs (where the buyer has strong financial incentives to avoid CVR  payouts), PAAS is actually very interested in restarting Escobal and hardly has any way to avoid the CVR payouts given the expiration only in 2029.

2019 annual report shows PAAS proven and probable resources (ex. Escobal) at 265m and 27m ounces for silver and gold respectively. During 2019 the company has produced 26Moz of silver at an average AISC (all in sustaining costs) of $10.46/oz. The size of the proven and probable silver reserves of Escobal mine is almost the same size as the rest of PAAS silver reserves – 265Moz. Over the twelve operational months before the shutdown Escobal was producing 21Moz of silver at AISC of $8.63/oz. So the mine is a very important asset, which when restarted, will double the silver resources and double the low-cost silver production of Pan American, while potentially increasing revenues of the company by 14% (based on 2019 data).

Despite that, the dilution effect from the CVR conversions would be quite negligible (7%).

PAAS currently seems to be is actively involved in the consultation process and has recently started various social/community programs to win the favor of the Xinca people:

The company was collecting signatures and identification numbers in exchange for food supplies, reminiscent of company tactics used to fabricate support for the project before it went into operation in 2014

Such actions were condemned by the Xinca parliament accusing the company of lobbying/bribing local communities:

According to the Xinka Parliament, the company is using the COVID-19 pandemic to expand outreach at the community level, increasing tension and conflict between communities willing to receive aid from a transnational mining company and those who are not.

It is worth repeating that PAAS acquired Escobal not before but after the license suspension and after the requirement of the currently ongoing consultation process was put in place.

Total consideration paid for Tahoe Resources amounted to $1.1bn (25% cash/75% stock). The value of CVRs if fully converted at PAAS prices at the time of the merger stood at $0.25bn.

The price of the CVR is relatively attractive

CVR is now priced at $0.82 vs $1.65 intrinsic value resulting in 100% spread. Right before the close of PAAS/TAHO merger the shares of the target were trading at a premium to cash+stock consideration (ex. CVR). Assuming zero risk of merger closing on the last few days of trading, the price paid for the CVRs also provided a similar upside in Escobal mine reopening scenario.

So essentially, at the moment CVRs are priced at the same level as two years ago, while the outlook seems to be much better – since then the new ‘pro-Escobal’ government was elected, the Supreme Court appears supportive of PAAS interests, and the Escobal reopening process is fast approaching the pre-consultation stages.

Long expiration timeframe of the rights

CVRs have a 10-year expiration date. The long remaining time till expiration provides a sufficient margin of safety for any further potential delays, however, the whole Escobal reopening process is likely to be concluded much faster.

Both unhedged and hedged positions are possible here. Going long-only would leave one exposed to silver price volatility. Historically, PAAS price has been highly correlated with silver prices (both are elevated at the moment, see the graph below). Meanwhile, hedging involves a risk of getting burned from both sides of the trade – e.g. if the silver prices shoot up, but eventually, it appears that CVR conditions won’t be satisfied in time/at all).

For tracking portfolio, we are adding a hedged position.

Many details on the background can be found in this report (as depicted by the opposing side, so could be biased). 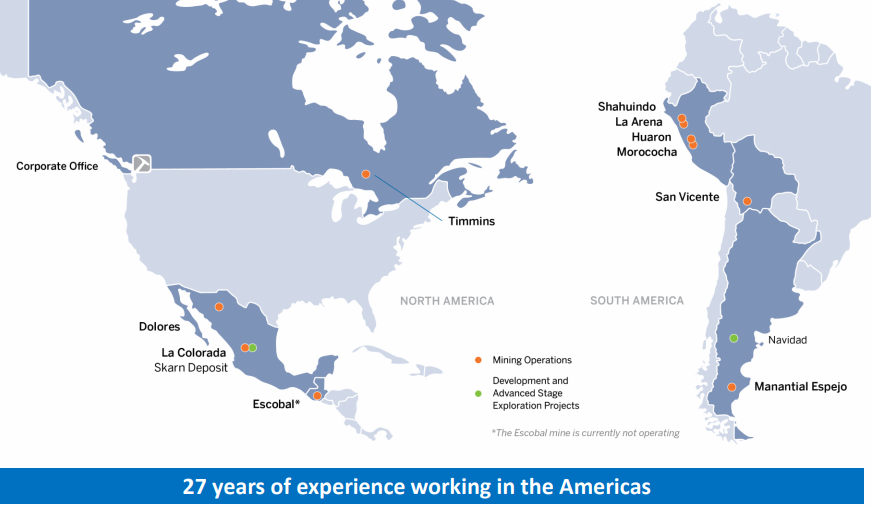 The company generates majority of its revenues from Gold, however, most of the PAAS reserves are in silver (half of it in Escobal): 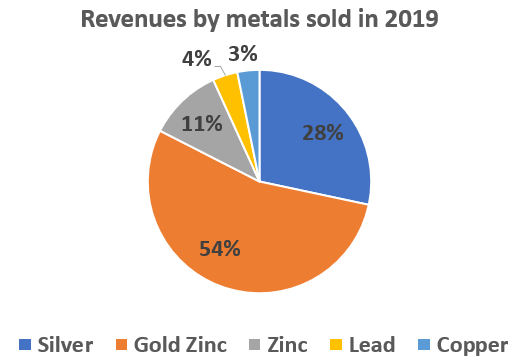 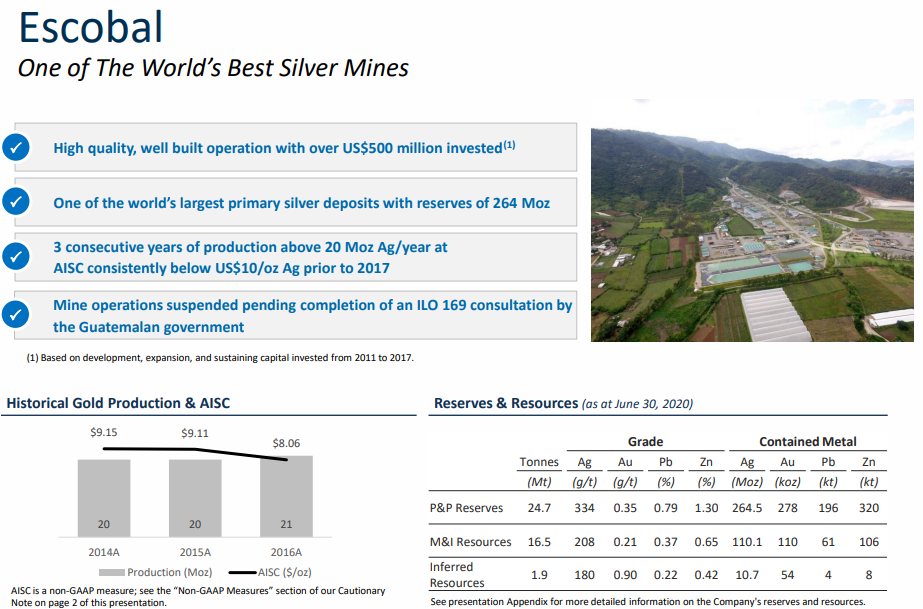 Comparison with other primary silver deposits: 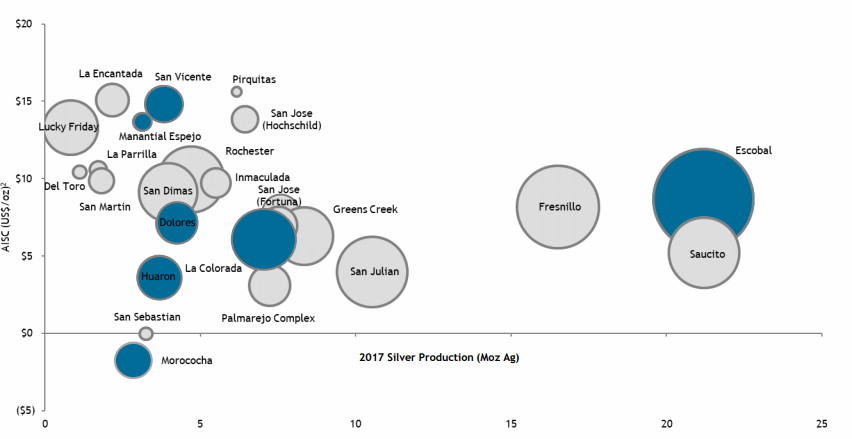