This idea was shared by Andy.

This is a purely strategic deal allowing Verra to strengthen its dominance in the US government services segment as well as to expand internationally (EMEA and APAC). The buyer seems credible ($2.5bn market cap) and has done several other international acquisitions in the last few years (including a 6x larger one than the current transaction).

Conditions include regulatory approvals – foreign investment authorities of Australia, New Zealand, and competition authority of Saudi Arabia. These consents are more or less just formalities and I don’t see any issues here due to the small size of the merger and Verra’s operational absence in these countries. RDFs NZ and Saudi Arabia operations are minuscule as well.

RDF shareholder meeting to vote on the merger is set for the 7th of May. According to Australian scheme merger requirements, transactions must be approved by 75% of the votes cast and a majority of the total number of shareholders present in the meeting. High approval threshold seems to be the biggest risk here, however, due to multiple reasons outlined below, I think that shareholder vote will be secured.

The available information is limited so far and the scheme document will be released in April. So far it’s not exactly clear how the buyer intends to finance the merger, however, it is unlikely to be an issue. As of Q3, Verra had US$129m of cash + US$44m availability under the revolver and remained FCF positive since the COVID-19 outbreak (US$29m FCF in 9m’20). The buyer is quite leveraged (3.8x net debt/EBITDA), however, the merger is relatively small and the outstanding debt is not due till 2025.

Overall, it’s quite likely that the merger will close successfully offering a relatively high 25% IRR opportunity assuming the scheme will become effective on the 17th of May and the consideration will be paid out on the 26th of May (based on the agreement document).

Due to the large premium to pre-announcement price (A$0.40/share), the potential downside in case of failure is quite large at more than 50%.

RDF provides traffic management and violation monitoring services in the US (45% revenues), Australia (41%), and also a little bit in Saudi Arabia, UK, NZ. The company focuses on the government sector and generates revenues from two segments – the equipment/system sales (speed / red light / bus lane cameras) and services (monitoring, analytics), where the revenue is mostly volume-based – a percentage of the violation fines charged goes to RDF.

RDF saw a relatively limited negative impact from the pandemic due to a decrease in traffic volume and various project-related delays. During H1 CY2020 revenue decreased by -14% YoY. However, because of the successful cost-cutting measures EBITDA grew +56% YoY.

The company operates primarily in the US, Canada, and certain EU countries as well. It operates two segments: commercial services (66% revenues in 2019) and government solutions (33%). 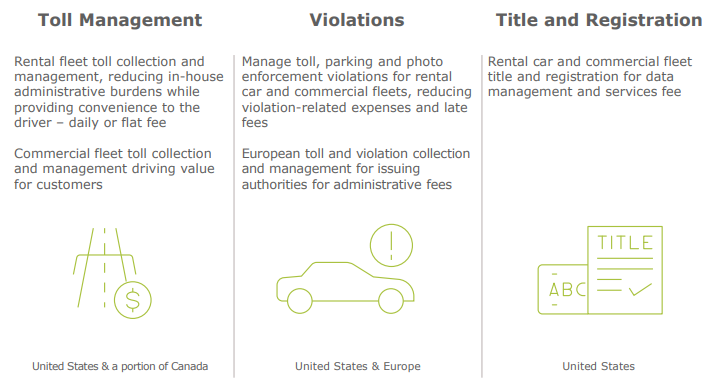 In essence, toll management/registration services reduce the administrative burden of dealing with constant fines issued when rental companies’ customers are driving tollways without paying. Verra registers all the rental/commercial fleet cars at most US tollways and collects/manages these plus various other parking/speed limit violation payments. The company partners with the three largest US rental car companies – Avis, Enterprise, Hertz).

Due to its large exposure to the rental car industry, the company was more impacted by COVID than RDF. Q2 revenue fell -27% and EBITDA -61% YoY, in Q3 the situation slightly improved with revenue decreasing -13% and EBITDA -27% YoY.

More details on the company’s business can be found in this VIC article.

This strategic combination will strengthen Verra’s government segment, eliminate one of its major competitors (RDF) and secure market dominance in the US. Verra already has a 50% market share in US government solutions segment, while RDF will add another 20%. All of this will position the company for future growth. The whole ANPR Systems (automatic number-plate recognition) market in the US is expected to increase by 10% CAGR until at least 2025.

Expanding the government segment is especially important given the strong COVID-19 impact on the commercial business segment and the rental car industry. In November the company speculated that return to pre-COVID numbers (traffic volume) in the commercial segment could be expected by the end of 2021 or early 2022, however, the chances are it might take longer due to still subdued business and leisure travel. Compared to the commercial segment, the government segment remained quite resilient to the pandemic and quickly recovered after the decline in April-May.

The growth in the government segment was driven by the expansion of the school zone speed program in New York (New York school zone speed camera law went into effect in mid-2019). It seems that the positive trend of school zone safety legislation is slowly advancing to the rest of the country and recently two other states (Georgia in July’19, Virginia and Washington) expanded their school safety regulations, providing revenue opportunities for the company (Q2 call):

On the legislative front, two states passed legislation that expands photo enforcement in their respective state. The Commonwealth of Virginia passed legislation in April that authorizes work zone at school zone speed cameras throughout the state. We are excited about the opportunities in Virginia and believe the obtainable TAM is approximately $50 million. Like Georgia, it will take some time for local municipalities to pass their own respective legislation and create RFPs, but momentum for this important safety initiative continues. Additionally, the state of Washington enacted legislation that authorizes bus lane and Block the Box enforcement cameras in Seattle on a trial basis. Even though it’s a fairly small opportunity, it’s another example of a state expanding their photo enforcement programs.

The acquisition of RDF will help Vera to continue riding the positive tailwinds in this sector.

The buyer has already carried out several acquisitions in the past: HTA – Highway Toll Administrator ($603m, March’18), EPC – European violations processor ($63m, April’18), and Pagatelia – tolling and parking solutions in Europe ($28m, Oct’19). The company continues its strategy of growing through acquisitions and has been eyeing attractive targets since Q4’19 already. Worth mentioning, that besides RDF, there are virtually no other sizeable targets left. Another ~20% of the government solutions sector market share is controlled by Conduent, however, it is a considerably larger firm ($1bn+ market cap), with traffic management business constituting only a small part of its revenues. The remaining peers are very small private companies.

The offer comes at 11x pre-COVID EBITDA (12 months ending Dec’19, fiscal year for RDF ends in June) vs 13x+ VRRM valuation. However, given that since 2014 RDF has been consistently unprofitable and overall is a much smaller, slower-growing business with significantly lower margins compared to Verra (EBITDA margins of 13%-18% vs around 35% in Verra’s government segment), a lower valuation multiple seems justifiable. Fair valuation combined with considerable premium to pre-announcement price (which has not changed much during the last 6 years) should incentivize shareholders to approve the merger.

On the other hand from Verra’s perspective, if the acquirer manages to increase the operational efficiency of RDF lifting the margins closer to its own levels, the acquisition is a bargain.

No opposition has been voiced so far by any of the shareholders. This is quite important as 10-years ago Cooper family (Mr. Cooper was an ex/ousted chair of the company) opposed the A$2.75/share offer from PE firms Macquarie and Carlyle. Copper family-controlled 11% of shares at the time and apparently was dissatisfied with the price. Eventually, despite the price bump (from A$2.70/share), the proposal did not pass the approval threshold – only 66% voted in favor (including 12% held by the acquiring PE firms). In 10 years since then, RDF’s situation has changed dramatically – it was subject to a number of serious bribe scandals in the US (Chicago in 2014, then Ohio, Arizona, and other states) and allegations of charging the drivers incorrectly/without a proper reason. This has resulted in RDF getting banned from bidding for new offers in Chicago (was their major geographic region at the time), while Ohio, Arizona, and more recently Texas banned red light camera’s altogether. The whole thing resulted in a significant impact on the company’s reputation and operational performance (revenue has remained flat/slowly shrinking since then). RDF share price fell to around A$0.40/share levels in early 2015 and never recovered either (until the recent offer). In this light, it is not surprising that no opposition has been voiced yet (especially at this price and premium), and overall, I expect the offer to get approved this time.