This idea was shared by Tadas.

White Mountains Insurance is an underfollowed insurance investment holding company with a fantastic track record, a history of large buybacks, and an interesting but opaque set-up currently.

The thesis here is quite simple – Q4 results of WTM (to be released tomorrow or Monday next week) will reveal a substantial increase in BV/adj.BV due to the recent IPO of MediaAlpha (MAX) IPO in October. I am expecting this to act as a catalyst for WTM share price appreciation as the company has always traded around its book value and currently shares stand at 0.8xBV.

Currently WTM trades at 0.8x adj. BV, which is well below its historical valuations: 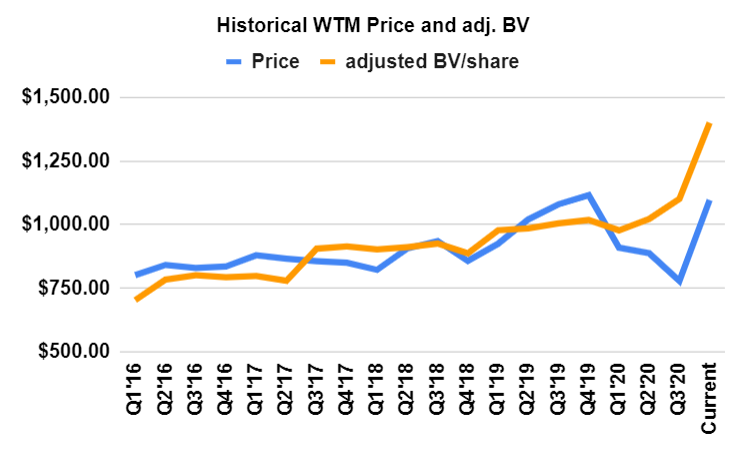 Moreover, the company has a great track record of creating value, compounding its BV, consistently producing solid ROE (around 10%), and a history of large share buybacks. WTM has repurchased nearly half of its outstanding shares since 2016 (see the section below).

Together with the whole insurance industry, the company was impacted by COVID-19, which resulted in the share price fall during the first 3 quarters of 2020. However, WTM segments performed quite solidly with profitability remaining stable/growing and with limited/no effect on the BV. Upon successful IPO listing of MAX both – the share and the BV – started increasing, however, the gap between the two never closed. I would expect the company to get back to its previous valuation levels (1xBV) eventually and Q4 result announcement with a clearly indicated new BV might act as a catalyst for that.

There might also be more catalysts down the line to close the valuation gap.

It is likely WMT is willing to divest MediaAlpha fully, but the process could be delayed (IPO lock-up expires in April 2021). WTM sold down part of its stake (3m shares) in MediaAlpha IPO and back in 2019 sold a significant stake to Private Equity firm Insignia Capital. These actions suggest that WTM is more interested in selling MediaAlpha than keeping it. With MAX stake making up 30% of WMT book value any further sales would give plenty of dry powder for buybacks if the valuation spread persists.

WTM is a former insurance holding company founded by John J. Byrne. Currently, the insurance operations are a relatively small part of the whole with other insurance-related services making up the rest:

So far WTM has been very successful with its consistent book value compounding strategy (similar to Berkshire, which by the way used to be WTM major shareholder till 2008) – over the last 20 years BV of the company has been growing by around 9% (management letter): 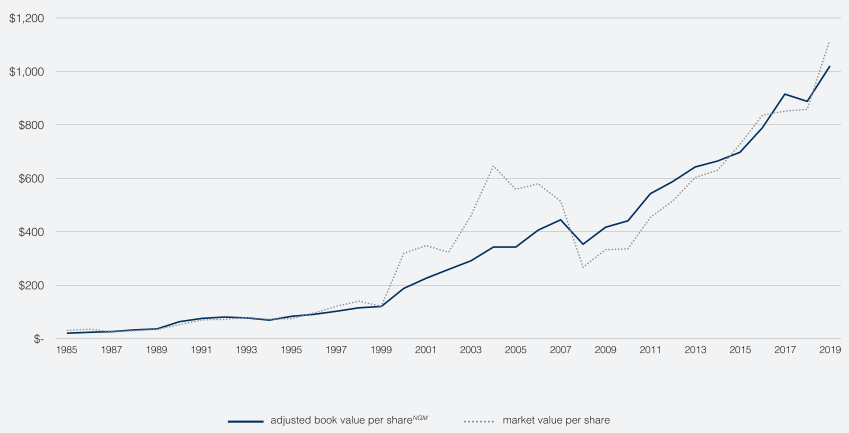 Aside from the successful listing of MAX, one other big recent WTM win was the sale of OneBeacon in 2017. With the help from Warren Buffet, WTM acquired a struggling insurer OneBeacon in 2001 at below BV and then quickly transformed the company. In a few years the combined ratio went from 1.21 to below 1.00 (was 0.97 in 2016). Over 16 years WTM managed to significantly increase OneBeacon’s book value and in 2017 sold the company at 1.7x BV, generating 2.5x return on investment and 14% IRR.

WTM management has achieved this successful track record while retaining a very conservative and disciplined investment approach. For the last several years the company has been keeping a significant portion of equity capital undeployed and carried out large amounts of buybacks (at around BV). 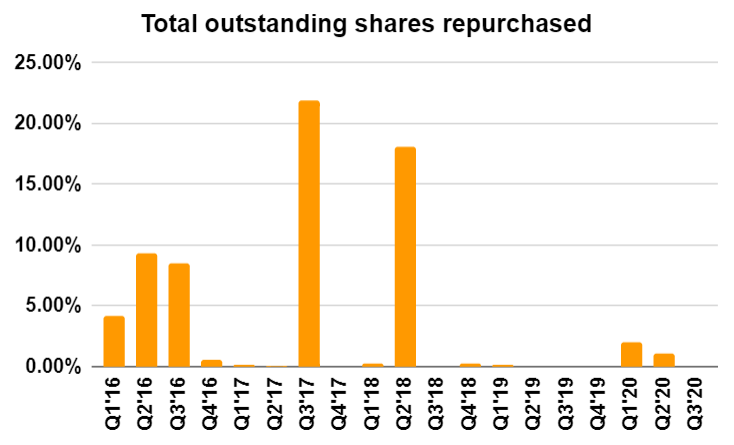